Classic clash at Twickenham: England vs All Blacks

It’s all happening at Twickenham once again as, this week, the All Blacks come knocking.

After tasting defeat in their first outing of the series (against Argentina), England came back strongly last weekend with a commanding win over Japan:

In Edinburgh, the All Blacks were pushed close by a spirited Scottish side:


In terms of the imminent fixture, who can forget the last time England and the All Blacks faced of?:


In the England camp, captain Owen Farrell will make his 100th appearance for England at inside centre.  Farrell made his debut against Scotland in February 2012 and he becomes only the third England men’s player to reach a century of caps.

Manu Tuilagi returns to the starting line-up at outside centre.  Marcus Smith is at fly half and Jack van Poortvliet is at scrum half.

Vice-captain Jack Nowell is at right wing, Jonny May is on the left wing and Freddie Steward is at full back.

Sam Simmonds moves to flanker with Tom Curry and Billy Vunipola is at No. 8.

Will Stuart returns from injury and is named as finisher, alongside David Ribbans who could add to his first cap which he received against Japan.  Jack Willis is named in the 23 and is joined by Jamie George, Mako Vunipola, Ben Youngs, Guy Porter and Henry Slade.

The match marks the first meet between the two sides since England beat the All Blacks 19-7 in the 2019 Rugby World Cup semi-final.

Eddie Jones said: “This fixture doesn’t come around too often and these are the games that players remember in their careers.

“New Zealand have had the upper hand over the years, but it’s been more balanced in recent times and the players have a chance to play their part in history.

“We’ve had a great week preparing for the game and the team is ready to go at them.

“We’re really pleased for Owen that he is reaching such a significant and special milestone.  He is an excellent player and competitor and he is deserving of every cap.”

All Blacks selectors Ian Foster, Joe Schmidt and Jason Ryan have named Brodie Retallick for his 100th All Blacks Test, against England at Twickenham.

The 31-year-old will become the 12th All Black to reach the milestone and just the second lock forward in that illustrious group, alongside captain Samuel Whitelock.

Retallick and Whitelock will also create their own piece of history, setting a new world record of 64 Test starts together. The previous record (63) was held by South Africa’s Bakkies Botha and Victor Matfield.

Playing in his 11th international season, Retallick will share the special occasion with family who have travelled from New Zealand to celebrate along with team-mates and team management.

“The All Blacks congratulate Brodie and his family on what is an extremely proud moment for them,” said head coach Ian Foster. “He has had a massive contribution to the legacy of this team over the last decade, during which he has inspired many.”

The team to take on England resembles the match day 23 that took on Wales a fortnight ago, with some minor tweaks. 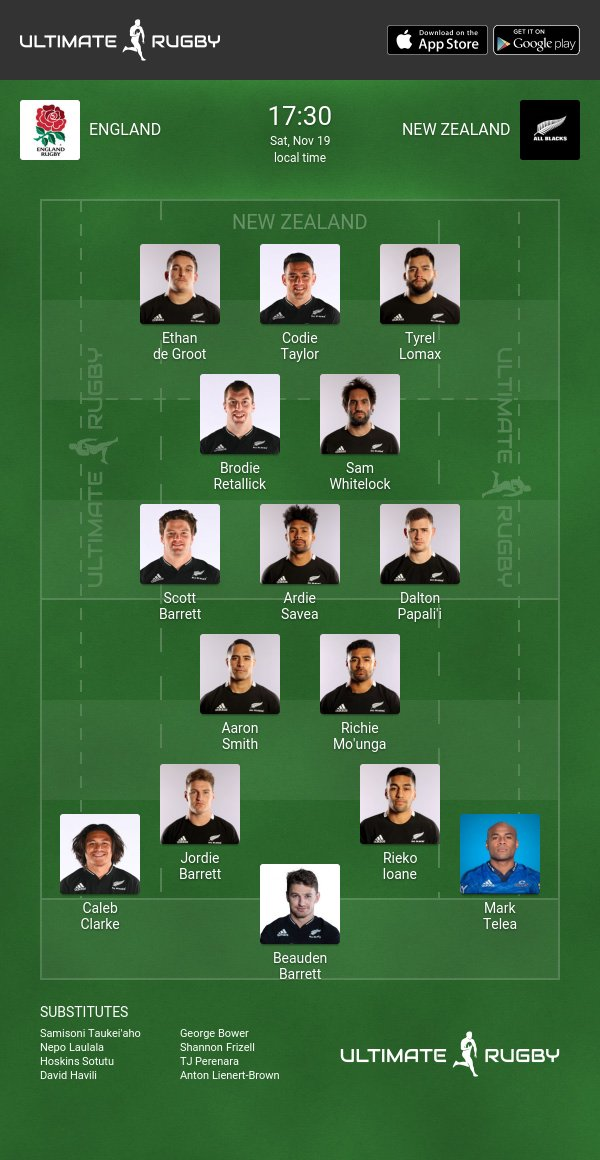 After impressing on debut against Scotland last week, winger Mark Telea has been retained alongside 79-Test veteran TJ Perenara who will provide halfback cover.

With Retallick returning from suspension, Scott Barrett has moved to the blindside flanker role. That will see two loose forwards in the reserves - Shannon Frizell and Hoskins Sotutu - who has been called in to play his first Test since the Lipovitan-D Challenge Cup clash against Japan last month.

“We feel the squad has been building nicely throughout this tour,” Foster added. “Playing England is something we don’t get to do often so we are excited for the challenge.

“This is an opportunity to continue our growth as a team at one of the great venues in world rugby – Twickenham.”