Daily Wrap | All the top stories of the day

A wrap up of the top stories and news in the rugby world.

A busy day in the rugby world in regards to postponements, foul play, citings and more.

England prop Joe Marler and centre Manu Tuilagi will learn their fate later this week after the Six Nations set a date for their disciplinary hearings.

Marler has been cited for the incident which saw him grab the genitals of Wales’ captain Alun Wyn Jones while Tuilagi will also face a hearing following the red card he received against Wales for a dangerous tackle.

England’s versatile forward Courtney Lawes has also been cited for a dangerous tackle in the encounter against Wales. Read more

The energic, physical and simply brilliant Justin Tipuric has been outstanding for Wayne Pivac's side the entire Six Nations and his performance on Saturday against England was no different.

Tipuric's game against England everything! He made 11 tackles in the 80-minute performance taking his tally to 60 in the competition after 4 games and he is still yet to miss a single tackle.

He made 52 running metres from his 6 carries making three clean breaks, two of which leading to tries. Read the full story and see Tipuric's highlights here.

France team manager Raphael Ibanez has said that he has put in a request to the Six Nations to have a look into an alleged eye-gouging by Scotland loose forward Nick Haining.

The incident Ibanez is referring to is said to have kicked off the scuffle and eventual red card to French tighthead prop Mohamed Haouas who punched Jamie Ritchie in the weekend's loss at Murrayfield.

Haouas was red-carded before half time but French television footage claims to show Haining making contact with the Montpellier front-rower's eyes in a scuffle beforehand. Continue reading

Another Six Nations game has been postponed

Another one of Ireland's games has been postponed! ☘️ #SixNations

The Six Nations clash between France and Ireland at the Stade de France will not go ahead on Saturday. France's decisive Six Nations encounter with Ireland has been postponed due to the spread of coronavirus.

Les Bleus' hopes of a Grand Slam were ended by a defeat to Scotland on Sunday, and they are now level on points with England on 13 points after four matches. They can still clinch the title with a victory over Ireland at the Stade de France, but now face a wait to have that fixture played.

The Six Nations have since confirmed that Saturday’s meeting of Wales and Scotland in Cardiff will go ahead as scheduled, despite reports the game was set to be postponed.

Ireland coach Andy Farrell says his players have been left "gutted" by the postponement of Saturday's Six Nations game against France.

"The reaction of the players when we've come off the back of a good morning's work was one of deflation," he said.

"Yeah, gutted," added Farrell, who is in his first season as Ireland coach after taking over from Joe Schmidt.

"We've built up for a couple of weeks on the back of a bitter disappointment [against England].

"We were looking forward to the week ahead. We're disappointed that it's not going ahead but at the same time we fully understand.

"There's nothing you can do. You can only control the controllables."

England head coach Eddie Jones will meet with RFU chief executive, Bill Sweeney, in the next fortnight to decide whether to sign a new contract to stay on as England head coach with his current deal expiring at the end of next season.

The England coach will arrive at the negotiating table with a strong hand boasting an impressive run that saw England reach the World Cup final and win a Triple Crown in the last year.

“I think we’ve got dinner organised in a couple of weeks so we may be able to chat about it,” said Jones who then said he does not actually like his job. “I never enjoy coaching. Winning is a relief. Anyone who tells you they enjoy coaching is lying. All you do is coach hard, if you win you feel good for 24 hours and then you’re back into it. That’s all it is.”

Japan Rugby has suspended Japan's premier rugby competition the 'Top League' for three weeks following the arrest of a Hino Red Dolphins player for drug use.

This comes off the back of a two week hiatus due to the coronavirus outbreak, and Japan Rugby have announced that “the league will undergo a full investigation and aims to restore the public’s faith in rugby’s core values.”

It is reported that New Zealander Joel Everson is the player who is alleged to have used cocaine, and a statement released by the league said that there will now be a process of education.

"We have betrayed our fans and society, and we must work diligently to restore trust."

Nicky Thomas returns to the Ospreys

Bristol prop Nicky Thomas has rejoined the Ospreys on a two-year deal from next season.

The former Wales Under-20 international, now 25, had spells at the Ospreys, Dragons, Gloucester and Scarlets before joining Bristol last summer.

“There is unfinished business for me with the Ospreys,” Swansea-born Thomas told the region’s official website.

The EPCR released a statement over concerns that the quarter-finals of Champions Cup and Challenge Cup due to Covid-19.

The statement read: "It is currently envisaged that the Heineken Champions Cup and European Rugby Challenge Cup quarter-final matches will go ahead as scheduled on the weekend of 3/4/5 April."

"EPCR intends to complete all eight fixtures and will continue to monitor developments while liaising with the relevant league and union bodies, as well as governments and local authorities."

"EPCR is fully supportive of any preventative measures that might be required in the interests of overall public health in relation to Covid-19 and will respect instructions provided by authorities."

Hurricanes prop Tyrel Lomax has been suspended for 3 weeks for his high shot on Blues fullback Stephen Perofeta on Saturday night.

Lomax was red-carded ealry in the second half of the Hurricanes' 24-15 defeat. He has now been suspended from all forms of the game up to and including March 27. 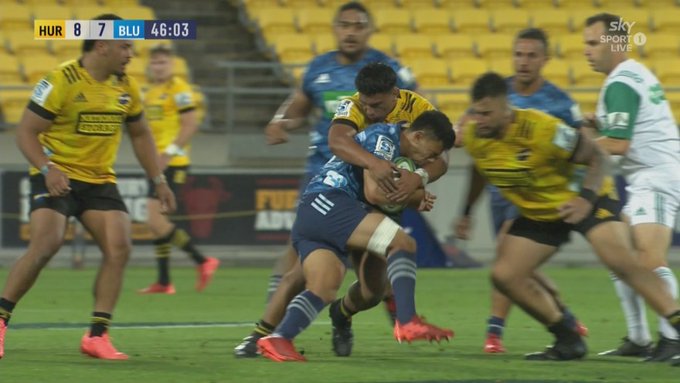 Jaguares hooker Santiago Socino has been cited for his stamp on Craig Burden in the 80th minute of the match against the Sharks in Durban on Saturday.

Socino is alleged to have contravened Law 9.12 which states that a player must now physically or verbally abuse anyone. In this case, physical abuse includes stamping or trampling on an opposition player.

Chiefs centre Anton Lienert-Brown has committed his future to New Zealand by signing a new contract until the end of the 2023 Rugby World Cup.

Lienert-Brown made his Super Rugby debut as an 18-year-old in 2014 and was handed his first All Blacks cap two years later, with his number of Test appearances now standing at 43. Read more

Click on the links below to read our selected round-ups from the past weekend:

Six Nations Team Of Round Four