English Teams to Take On Ireland in Round 3 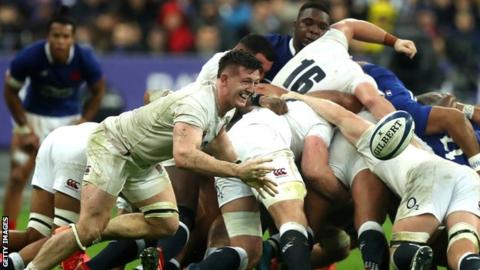 Coach Eddie Jones has tinkered with his team that were victorious at Murrayfield in Round 2 for their massive clash against the Irish at Twickenham on Saturday.

In the forwards, Joe Marler comes in on the loose-head and Courtney Lawes returns to the back-row to partner Sam Underhill and Tom Curry.

The English have welcomed the welcomed the return of Manu Tuilagi who slots into the outside centre berth, prompting a move for Jonathan Joseph to the wing.

Jones has been complementary of the Irish in the build-up to the encounter:

“Ireland are a very good team, extremely well-coached. They are a team we respect a lot. They will bring their usual physicality and under Andy Farrell they’ve opened up their game a little bit.”

Sam Crean earns his first cap, joining Theo Dan and Luke Green in the front row for Saturday’s match-up against the Irish at Franklin’s Gardens.

Flanker Josh Gray and second row forward Hugh Tizard make their first starts of the competition in a pack that will be tested.

The bench sees the likes of Chunya Munga, Rob Farrar, Blake Boyland, and Will haydon-Wood, who could all get a first taste of Six Nations rugby.

Saturday promises to be a titanic struggle between these two unbeaten sides.

Hannah Botterman’s injury sees Detysha Harper included in the Red Roses for their sell-out fixture against Ireland on Saturday.

In other changes, Leanne Riley comes back in at scrumhalf while Katy Daly-McLean and Sarah McKenna are also included in the starting XV.

England will be confident going into the match after their drubbing of Scotland in Round 2.