The Champions Cup is back and just eight teams remain as the top clubs in Europe battle it out this weekend for a place in the semi-finals.

Five winners, with 13 Champions Cup titles, remain in the running for the title with Exeter Chiefs, Racing 92 and Clermont will be out to win the competition for the time.

Leinster cruised through the pool stages to claim the top seed for the playoffs and host a wounded a depleted Saracens side without their star pivot, Owen Farrell.

Exeter Chiefs reached the quarter-finals for the second in their history and the current Premiership leaders will hope to go a step further this season as they look to beat Northampton Saints to the semi-finals.

Toulouse, like Leinster, won all their pool games and will host Ulster in quarters while Racing 92 and Clermont battle it out in an all-French quarter-final.

The pools stages of the Champions Cup is far from a fair indication of the eight side's battling out this weekend, so we have taken a look at the form of the side's since the resumption of their respective leagues. It's been business as usual for Leo Cullen's men since the resumption of the PRO14 as they edged Munster in their first game out before a second-string side beat Ulster the week before the PRO14 semi-finals. Leinster then claimed 10 point victory over Munster to book their place in the final where they completed the perfect season by winning every single PRO14 fixture during the 2019/20 season.

Leinster's opening game against Munster saw the side get pushed to the limit but they managed to hold showing just how difficult they are to knock over. In their subsequent matches, Cullen's men haven't quite hit the highs they had in December last year and January this year. Although they haven't played to their usual high standards, they have been brutally effective on defence and have capitalized on their opportunities.

Leinster will certainly be the team to beat having yet to lose during the 2019/20 season but if anyone could do it, it's their opposition on Saturday. Saracens boss Mark McCall has had to deal with a number of stars leaving Saracens on loan and permanently since the resumption of the Premiership while also having to quickly integrate academy players and new signings.

McCall has managed this somewhat successfully winning four of Saracens seven games since the resumption of the Premiership. The tight fixture schedule has also tested the side's depth but wins over Harlequins, Gloucester, London Irish and Exeter show that Saracens are a threat. All but one of their losses since the return of the Premiership, an 18-28 loss to Wasps, have also come within seven points with Bristol beating Saracens by 4 and Sale by 7.

Owen Farrell is certainly a big blow for Saracens hopes of toppling Leinster and ending their winning streak but one must not forget that McCall's side was able to win their quarter-final last season without their key man. Saracens will be relegated at the end of the current Premiership season and the defending Champions will be keen to reclaim the Champions Cup title with literally nothing else to play for this season.

Excluding friendly and warm-up games, French Top14 sides have played two competitive games since the return of rugby in France with the 2020/21 season officially kicking off.

Racing 92 managed to go two from two to start the season with Finn Russell playing a major role in both games for the Parisian side with the Scottish International having already scored a try and assisted three. Meanwhile, Clermont opened their account for the new season with a win over bitter rivals Toulouse in the opener but stumbled in the second round going down to Bayonne.

Both sides are likely to run out on Saturday without their new additions at fullback with Japanese international Kotaro Matsushima picking up an injury inside the first 20 minutes of his debut in round one of the TOP14 while Racing 92's Kurtley Beale was shown a red card for a dangerous tackle in the last round of action and maybe suspended for the quarter-finals.

Heading into the game, Racing will certainly be in higher spirits having scored 8 tries across the opening two games of the TOP14 and claiming wins over two strong oppositions. Lyon were ranked second in the TOP14 before the season was called off and Racing managed to claim a narrow 4 point win over them away from home, while they also managed to claim a comprehensive 41-17 victory over Montpellier.

Clermont also won their opening game of the season beating Toulouse at the Stade Marcel Michelin but they were certainly helped by key men going down for Toulouse, including Cheslin Kolbe, as well as a 50th-minute red card to Richie Arnold. Despite being down a man Toulouse managed to 18 unanswered points to lead with 10 minutes to go before George Moala saved the day for Clermont to secure the 33-30 victory. There was no saver for Clermont against Bayonne, however, as they held a 7-19 lead after 68 minutes as the home side punished Clermont scoring two converted tries to come away with the victory.

The old cliche of anything can happen truly applies to this game with Racing's form suggesting they should be the favourites, but picking up a win at the Stade Marcel Michlin is no easy task. As mentioned previous, TOP 14 club have played just two games so ahead of the Champions Cup quarter-finals with Toulouse winning one and losing one so far this season. Their fantastic comeback against Clermont was thwarted by George Moala but they did play some fantastic expansive attacking rugby. This was on display once again as they beat La Rochelle in their second match of the season with Cheslin Kolbe putting in a starring performance scoring a brace.

Ulster also had a losing return to rugby going down to Connacht and Leinster but John McFarland's side managed to turn it up against Edinburgh to snatch a place in the final of the PRO14 where they were outplayed by Leinster.

Toulouse have looked incredibly dangerous on the attack on their first two games back scoring seven tries, a tally only better by Racing 92 (8) in the TOP14, while Ulster will be looking to the likes of Marcell Coetzee and Stuart McCloskey to continue their fine form and guide them to victory.

An entertaining game awaits us on Sunday as Toulouse do look the favourites but a wounded and fired up Ulster side could be waiting to cause an upset. 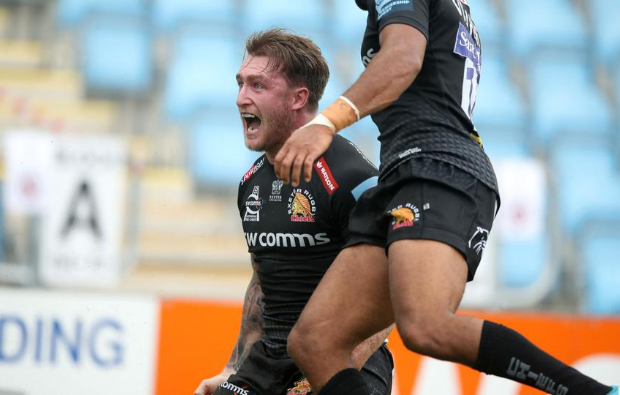 Judging on recent form, Sunday's all English Champions Cup quarter-final should see Exeter march into the semi-finals with Rob Baxter's side winning all but one of their seven Premiership fixtures since the resumption of the league.

Baxter's side lost just the one Premiership match, to Saracens, in a game that saw both sides field what could be described as second and third-string players. Besides that loss, Exeter have come out of lockdown sprinting brushing aside the likes of Leicester Tigers, Sale Sharks, Bristol Bears, Worcester, Northampton and Gloucester with little fuss.

The 19-22 victory over Northampton was decided by a late Tom O'Flaherty try but Chris Boyd will be well aware that his side will be facing a very different side on Sunday with a number of Exeter's stars having missed that trip to Franklins Gardens.

While Exeter have lost just one game since the resumption of the season, the opposite is true for Northampton with Chris Boyd's side winning jut the one game against London Irish. Northampton headed into lockdown inside the top four of the Premiership but have since slipped down into seventh.

A wounded Saints side will pitch up to Sandy Park on Sunday looking to make up for their poor form in the Premiership but will be fronted by an Exeter team that is incredibly hard to put away.

Who are you backing from this side of the draw to reach the Champions Cup Final? 🤔