World Cup champion, Warrick Gelant, will run out for his 50th Super Rugby cap against a strong Jaguares outfit when the Vodacom Bulls host the Argentine team on Saturday, 29 February 2020. The high flying fullback made his debut against the DHL Stormers back in 2016 and has scored 15 tries for the Pretoria based team.


Regular captain, Burger Odendaal, has been ruled out with an ankle injury which makes space for Tongan centre Nafi Tuitavake to make his Bulls debut. The fleet-footed Tuitavake is no stranger to Vodacom Super Rugby as he amassed 20 caps for the Crusaders after making his tournament debut in 2014 before plying his trade in Europe for several seasons.


There is one change and two positional changes amongst the forwards with Marco van Staden packing down at openside flank while Jeandré Rudolph and Josh Strauss shift around the loose trio with Strauss slotting in at blindside flank and Rudolph donning the no.8 jumper. The backline is tweaked slightly with Embrose Papier earning his first start of the season and Johnny Kotze moving to inside centre to make space for Tuitavake. The bench remains unchanged.

Bulls captain, Trevor Nyakane, congratulated Gelant on his milestone and welcomed Tuitavake into the fold.

"The team could not be happier for Warrick. He is a quality player as evident by his World Cup medal but more than that he is a great person. His work ethic and smile are infectious and we are proud to call him a teammate."

"It is a special occasion when any player pulls on a Vodacom Bulls jersey for the first time so we know Nafi is not only excited but also slightly nervous. It has been sometime since he played in Vodacom Super Rugby but he has been explosive in training so we're excited to see what Nafi brings to the table."

Head coach, Pote Human, has drawn a line in the sand in terms of his expectations from the team come kick-off on Saturday.

"Our backs could not be more against the wall at the moment. We have made improvements since the first match but we're still not doing enough within 80 minutes. We need to get the result." 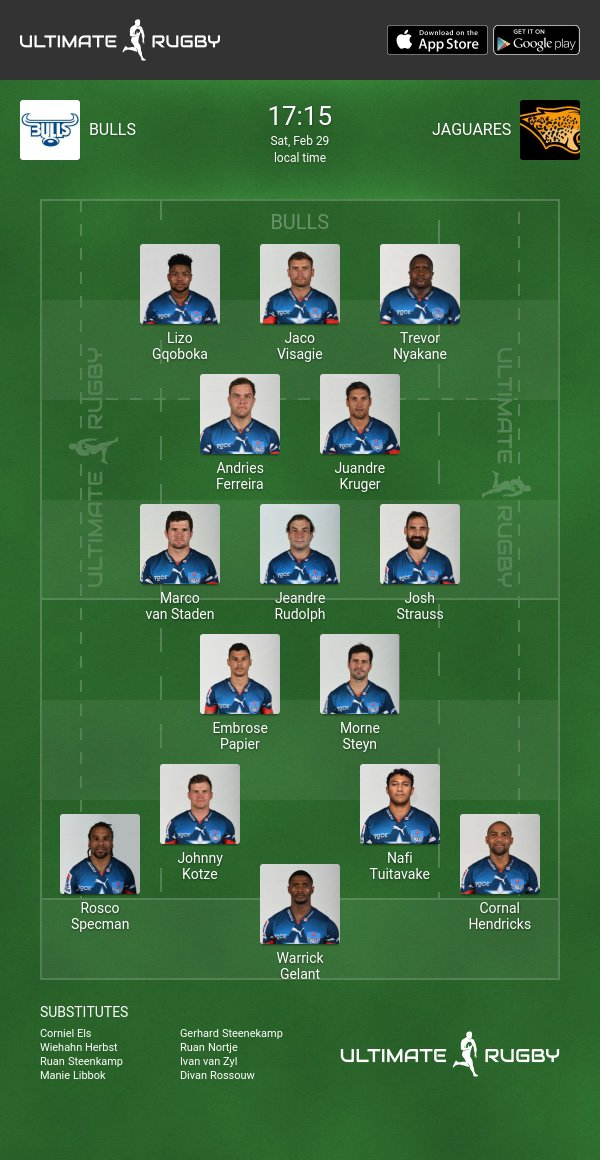