Head coach Kingsley Jones has announced the 31-player World Cup roster that will represent Canada at the 2019 Rugby World Cup (RWC) in Japan.

Canada is one of 20 nations that have qualified for the 2019 Rugby World Cup is being hosted for the first time ever in Asia from September 20th to November 2nd. There are a total of 48 matches that will be spread across 12 host cities, with each match venue hosting a minimum of two matches

The 2019 Canadian squad is mix of veteran and young talent with players travelling back from various global leagues to prepare for RWC with the national team.  The team is captained by talented forward Tyler Ardron who plays professionally in New Zealand with the Chiefs in the prestigious Super Rugby competition.

Ardron made his debut for Canada in 2012.  Veteran, and prolific try-scoring winger DTH van der Merwe, who plays professionally for Glasgow Warriors in the Pro14, will be making his fourth appearance at a Rugby World Cup.  The roster consists of players who play both internationally and domestically, many from the newly formed Major League Rugby here in North America. In all, the squad features 17 forwards and 14 backs.

“It’s been a really tough selection but that’s what we wanted.  The players made it difficult for us due to their commitment, and efforts over the last 18 months. I’d like to sincerely thank them all,” said head coach Kingsley Jones. “It’s always a challenge for coaches to find the right mix to be competitive as possible while also looking towards the future and ensuring we are in good position for 2023, and we feel we’ve achieved that. With only 10 months of preparation, it can of course be challenging - but the group is in a good space, and have met that challenge head on.

“Looking forward,” continued Jones, “there’s been a huge improvement and emphasis on development in the under 20 group and we saw the emergence of some really impressive young talent who will stay on our radar. We’re heading in the right direction not only for this World Cup but looking on to next one, particularly with the pool of young guys we’ve got coming through the age grade systems and sevens program.

No. 21 ranked Canada was the final nation to qualify for the 2019 Rugby World Cup, with wins over Kenya, Germany, and Hong Kong in a 4-team repechage tournament that took place in November 2018 in Marseille, France.

Canada have participated in every Rugby World Cup since the tournament began in 1987, with their highest finish coming in the 1991 Rugby World Cup where they reached the quarterfinals.  Canada and Japan are the only Tier 2 rugby nations to have taken part in every edition of the Rugby World Cup.

Canada, who have been drawn in Pool B, will get underway on Thursday, September 26th in Fukuoka City against No. 13 ranked Italy. They will go on to play No. 1 ranked and defending RWC Champions New Zealand on Wednesday, October 2nd; then No. 5 ranked South Africa on Tuesday, October 8th, and then wrap up their Pool play on Sunday October 13th against No. 23 ranked Namibia.

“On behalf of the entire Rugby Canada family, I’d like to congratulate this group of players on being selected to represent Canada on the worlds’ largest rugby stage.  I also want to thank all of the players who have committed significant time and resources to be part of this exhaustive and challenging selection process,” said Allen Vansen, CEO, Rugby Canada.  “We wish this talented group of players the very best of luck this coming weekend in Vancouver, and look forward to cheering them on as they compete among the best rugby nations in the world in Japan later this month.” 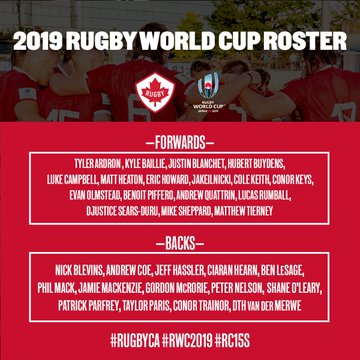