Montpellier have been linked with current World Rugby Player of the Year, Pieter-Steph du Toit, in a recent report by South African newspaper the Rapport.

The club responded to the reports that there has been an approach made to du Toit saying that they firmly deny the alleged “information” published.

However, where there is smoke, there is fire.

We take a look at the potential starting XV Montpellier could field if du Toit did in fact join the club.

Montpellier won't lack any fire power up front with seasoned internationals Bismarck du Plessis and Guilhem Guirado commanding the central role at hooker with the pair likely to trade the starting role with the less experienced pair of Youri Delhommel and Vincent Guidicelli waiting in the wings.

There is even more grunt either side of the pair with Georgian Mikheil Naraishvili on the loosehead and a trio of outstanding tightheads in Mohamed Haous, Titi Lamositele and Levan Chilachava. 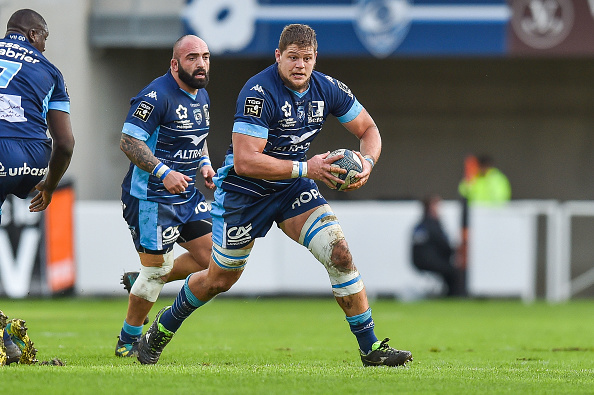 du Toit could find himself in the second row for Montpellier, a position he is more than accustomed too but if he is to feature in the back row Nico Janse van Rensburg and Paul Willemse are more than capable in the engine room.

Toulouse's Florian Verhaeghe is also rumoured to join Montpellier and bolster their pack with Jacques du Plessis and Georgian Konsantine Mikautadze also available to fill in.

Du Toit would be a handy second-rower during the Six Nations with Willemse away with France and potentially du Plessis who will qualify for France soon.

A powerful pack would be rounded out with an excellent back row with du Toit at blindside and Louis Picamoles at no.8.

Jacques du Plessis could provide another heavy carrier at openside with the more dynamic Yacouba Camara another option.

Kelian Galletier, Fulgence Ouedraogo, Julien Bardy and Kevin Kornath are also available to slot either of the two flanker roles with Caleb Timu backing Picamoles up at the back of the scrum. The World's Highest Paid Player, Handre Pollard, is set to get a fellow World Cup winner as a halfback partner if reports are to be believed.

Reinach has already confirmed his departure from Northampton Saints with there being no official word that he has joined Montpellier has of yet.

Reinach will have the promising talents Enzo Sanga and Gela Aprasidze backing him up with Kahn Fotuali'i set to retire or depart the club and finally Benoit Paillaugue another experienced head penned in for next season.

Johan Goosen is set to cover Pollard at flyhalf along with youngsters Thomas Darmon, who can also play in multiple roles like Goosen.

Arthur Bouthier has also played flyhalf for the club.

The promising talent of French international Arthur Vincent is set to combine with Springbok Jan Serfontein with Frans Steyn having already departed the club.

Montpellier do have cover in another promising youngster, Yvan Reilhac, while Johan Goosen and  Thomas Darmon could also feature in the midfield.

Arthur Bouthier lit up the Six Nations at fullback for France but will have some competition at club level next season in Johan Goosen, Henry Immelman and the incoming Vincent Rattez.

Rattez and Immelman are both fullbacks by trade but are more than comfortable on the wings. With Nemani Nadolo, Benjamin Fall and Timoci Nagusa all leaving the club the wings will be up for grabs next season.

Rattez will surely grab one spot with the other being fought by Immelman, Gabriel Ngandebe and potentially centre Yvan Reilhac.