How Things Stand After Round Two of Super Rugby Aotearoa

Round Two of Super Rugby Aotearoa saw the Crusaders hit the ground running with a good victory over the Hurricanes while the Blues further hit home the notion that they are the team to beat in the competition with an away victory against the Chiefs in Hamilton – a feat the men from Auckland had not pulled off for nine years. 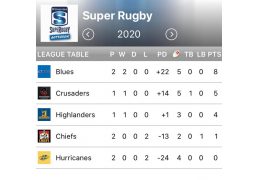 The Blues have been fantastic in the first two rounds as they travel back home to take on the Highlanders on the 27th - a game the former will be expected to win.

The Blues' position atop the log may soon be threatened, however, by a vibrant Crusaders outfit that managed to come away from their encounter with the Hurricanes with five points and a game in hand.

The Crusaders face the prospect of a home game against Warren Gatland's Chiefs - who are still on the hunt for their first victory - on Sunday the 28th.