Brumbies playmaker Christian Lealiifano will bring up his 150th Super Rugby appearance for the club when the team face the Jaguares at the Estadio Jose Amalfitani in Buenos Aires in the Super Rugby Semi-Final on Saturday.

The Brumbies skipper will lead a largely unchanged side into the cauldron of the home of Velez Sarsfeld FC hoping to guide the team into their seventh Super Rugby Grand Final and take another step towards a third title.

The only change from the starting XV that comprehensively saw off the Sharks at GIO Stadium last Saturday evening sees Lachlan McCaffrey come into the side at number eight, promoted form the replacements bench following the injury sustained by Pete Samu which precluded the Wallaby from travelling.

With McCaffrey in the run-on side, Murray Douglas is in line for his 11th appearance of the season as he steps into the finisher’s role amongst a strong-looking set of replacements with Head Coach Dan McKellar once more opting for six forwards and two backs.

Otherwise the Brumbies are the same combination that so effectively downed their South African opponents in front of a season’s best crowd in Canberra. McCaffrey joins a back-row that features dynamism and mobility in Rob Valetini and Tom Cusack with Rory Arnold and Sam Carter the second-row pairing.

Up front in the engine room the Wallaby trio of Scott Sio, eleven-try Folau Fainga’a and Allan Alaalatoa form a formidable front-row.

Behind the scrum the Joe Powell-Lealiifano axis remains intact with Irae Simone and Tevita Kuridrani in the centres. The pair have ten tries between them in 2019. The back-three all possess try-scoring nous and can point to a combined tally of a dozen tries with Tom Banks (6 tries) at full back and Henry Speight and Toni Pulu the express pairing on either wing.

Prop Leslie Leuluaialii-Makin is one of the six forwards as a substitute and the Brumbies stalwart will bring up his half-century of Super Rugby appearances when he is called upon.

Should the Brumbies be successful in their Semi Final there are two potential Super Rugby Grand Final fixtures that could take place next weekend. If the Crusaders defeat the Hurricanes in Christchurch, the Brumbies will travel to New Zealand, whilst if the Hurricanes claim the win the New Zealanders will be the opposition at GIO Stadium.

In the case of a Super Rugby Grand Final against the Hurricanes, ticketing information will be released via our website and social media channels immediately after the final whistle of the Crusaders v Hurricanes match. 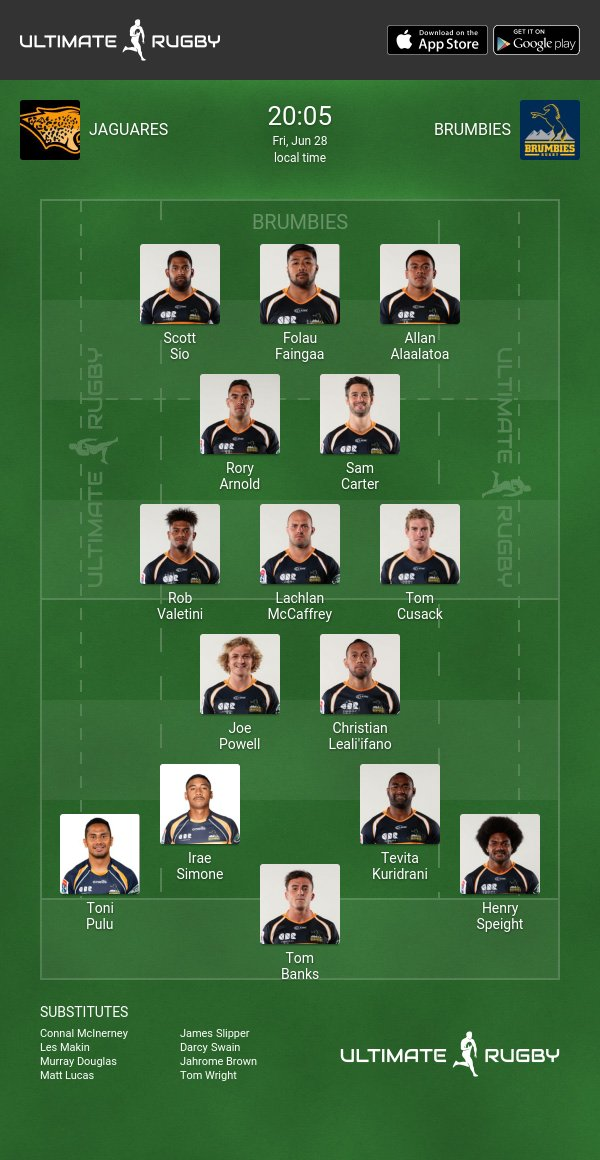