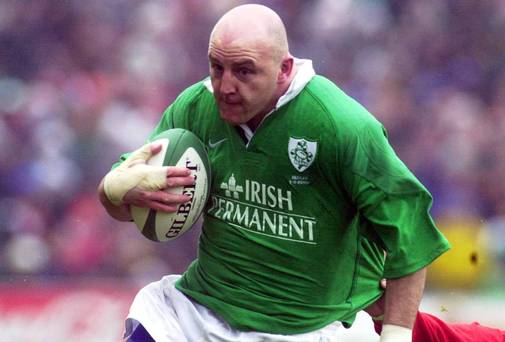 A native of Limerick, in the county of Munster, Keith’s playing career followed in the exact footsteps of his father, Gordon Wood, who represented Munster, Ireland and the Lions (tour of 1959).

Keith’s larger-than-life personality made him a revered figure in rugby circles the world over. He was capped 58 times for his country and 5 times for the Lions, venturing on two tours for the latter – to South Africa in 1997 and to Australia in 2001.

“My earliest memory of the Lions is seeing my father putting on his Lions blazer. He wore it all the time, actually, he was very, very proud of it. There was an aura all over our house in relation to what the Lions meant for him. When I started playing rugby, I wanted to have the same commitment to that jersey and to that blazer.” said Wood.

The Lions of 1997 ended their tour victorious- emulating the great series of 1974- although the former was decidedly more tightly contested.  The Lions won the first two tests 25-16 and 18-15 respectively, but were convincingly beaten 35-16 in the third.


Four years later, under the leadership of renowned English second-row Martin Johnson, the Lions suffered a first series defeat to a world-class Australian outfit, boasting the likes of George Gregan, Daniel Herbert, Stephen Larkham and George Smith. The Lions emerged victorious in the first test but were outdone in the other two. It was to be Wood’s final Lions tour and, despite the result, was made special for the hooker by virtue of the fact that it was where his father had worn the red jersey. His efforts in 2001 earned him the IRB International Player of the Year award.

Wood’s strengths on the pitch were abundant, but he was known mostly for his leadership and presence in broken play. Though not cut from the same cloth (in terms of physique) as many modern-day hookers such as Bismarck Du Plessis, he displayed the fierce work-rate of a loose-forward, inspiring teammates and intimidating opponents with a never-say-die attitude, emotion and passion.

He retired at the conclusion of the 2003 World Cup after captaining Ireland for the previous 6 years, and 2005 saw him inducted into the International Rugby Hall of Fame.

He currently resides in Killaloe where he and business partner Malcomb Bell recently opened a cafe and restaurant named Wood & Bell. He still regularly appears on television as a rugby pundit.

The sight of Wood’s bald head charging around the field of play with his infectious enthusiasm for the game still holds a special place in the minds of rugby-lovers everywhere and his stout service to the Lions will never be forgotten.