Academy product Darcy Swain will start his first every Super Rugby match as the Plu500 Brumbies head to Christchurch to tackle the Crusaders in Round 8 of the competition.

Swain, who recently signed a new three-year contract to keep him at the Brumbies until at least the end of the 2022 campaign, is one of five new faces in the starting XV for what is sure to be an emotionally charged evening in New Zealand.

Those changes include the return to action of jet-heeled winger Toni Pulu, who will be keen to get his Brumbies career off to a belated start, after his debut against the Rebels in Round 1 was truncated by a fractured cheekbone.

With Scott Sio, Folau Fainga’a and Rory Arnold rested as part of the Wallabies Rugby World Cup planning, Head Coach Dan McKellar has selected veteran hooker Josh Mann-Rea for his first start of the 2019 season, in a front row that sees the return of Allan Alaalatoa alongside James Slipper.

Murray Douglas also begins a Super Rugby match in Brumbies colours for the first time, in a second-row partnership with Swain, with the backrow identical to the one that played against the Reds in Brisbane, Lachlan McCaffrey at number eight, flanked by Tom Cusack and Pete Samu.

The back-line, with the exception of the returning Pulu, remains the same as the team that took the field at Suncorp Stadium, Christian Lealiifano leading the side as Captain for the 36th time.

Amongst the finishers, there is a potential debut for prop Vunipola Fifita who shone in the Canberra Vikings side that reached the Semi-Final of the National Rugby Championships last year and in Brumbies Runners fixtures in 2019.

Hooker Connal McInerney also joins the reserves for the first time in 2019, along with backs Matt Lucas, Jordan Jackson-Hope and wing Andy Muirhead, who scored a tremendous opportunistic try from the unusual position of centre in Canberra Royals Griffin Legal John I Dent Cup match against Queanbeyan Whites. 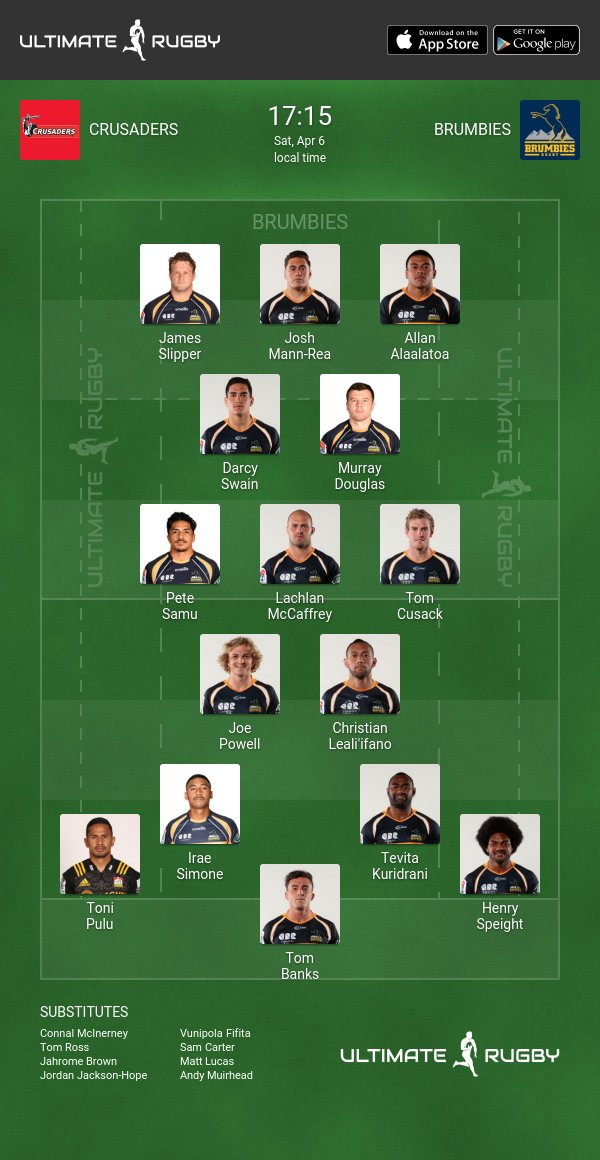