Manu Tuilagi is set to make his long-awaited return from injury on Friday night after being named on the bench for Sale Sharks' round 20 clash with Bristol Bears.

The England centre has been sidelined for seven months due to the achilles tendon tear he suffered at Franklins Gardens in October.

Third-placed Sale Sharks host league leaders Bristol Bears in a possible pre-cursor to a semi-final match-up. The Bears have long been assured of a place in the last four but Sale still have a little bit of work to do, requiring just one point from their remaining three games.

A win for the Bears will secure a home semi-final for Pat Lam's charges.

Sale Sharks' Director of Rugby Alex Sanderson names England international Tuilagi in an experienced matchday 23. Following an emphatic victory over Bath Rugby in round 19, Sanderson has favoured consistency as the Sharks look to secure their first play-off spot in 15 years.

Bevan Rodd, Akker van der Merwe and Coenie Oosthuizen make up an unchanged front row after the trio’s impressive display at the Rec in round 19, while Cobus Wiese combines with compatriot Jean-Luc du Preez in the second row.

Ben Curry returns to the Sharks starting XV after a successful comeback from injury versus Bath. He lines up alongside twin brother Tom and towering Springbok number 8 Daniel du Preez.

Faf de Klerk and AJ MacGinty will assume control of the Sale backline again this weekend. Connor Doherty gets the nod at inside centre and takes his place alongside ever-present Sam James in the Sharks’ midfield. Byron McGuigan and Marland Yarde are at their disposal out wide, with Luke James at full-back.

Pat Lam has made three changes to his starting line up with Piers O’Conor returning to start in the centres alongside Semi Radradra.

Jake Woolmore and Fitz Harding also return to the starting line up while Harry Thacker is listed among the replacements and could make his first competitive outing since the European Challenge Cup final in October 2020.

Nahuel Tetaz Chaparro returns to the matchday squad for the first time since February. 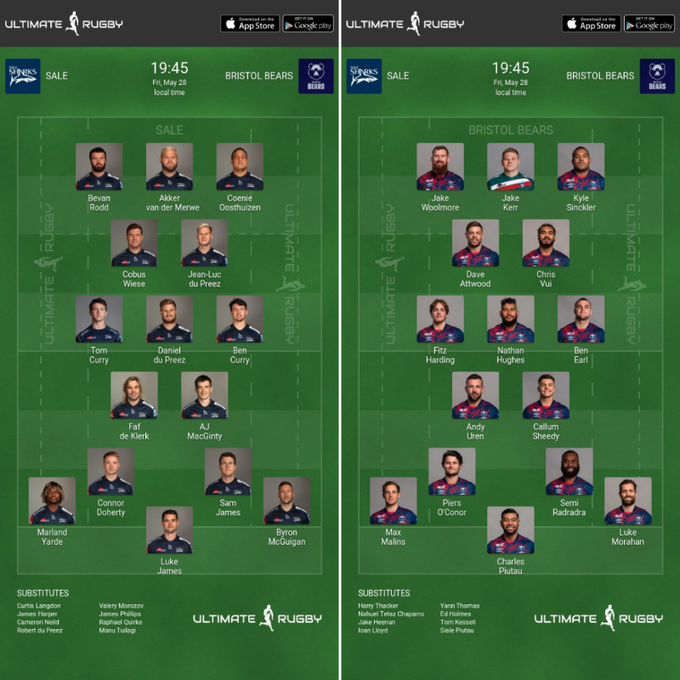