November Internationals: Team of the Day

The former Belvedere schoolboy is enjoying a great spell in the green jersey currently. Another good performance today from the Leinster prop, as Ireland dominated the Argentinian pack in the 1st half. Good technique forced the Argentinians into giving away scrum penalties. His work rate round the park was good too, making 10 tackles and being a powerful force at the breakdown.
2. Jamie George - England
The Saracen really put on a show for Eddie Jones today, showing why many believe he deserves the starting hooker's jersey during the upcoming Six Nations. He turns up at the right place on the field time and time again as he runs clever support lines for his teammates. His skills are fantastic and they were on show for everyone when he gave a sublime pass which put away Lozowski for his try. The lineout functioned superbly as well so Dylan Hartley will be feeling under even more pressure to perform in the coming weeks.
3. Tomas Francis - Wales 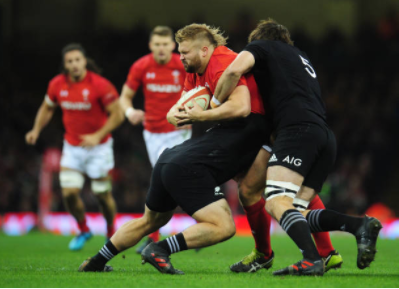 The Welsh scrum really caused New Zealand problems today and the tighthead was obviously a key compenent in that. His work around the field was particularly impressive as usual. The Exeter Chiefs man worked tirelessly, making 10 tackles, missing none, and hitting ruck after ruck to keep Wales on the front foot.
4. Grant Gilchrist 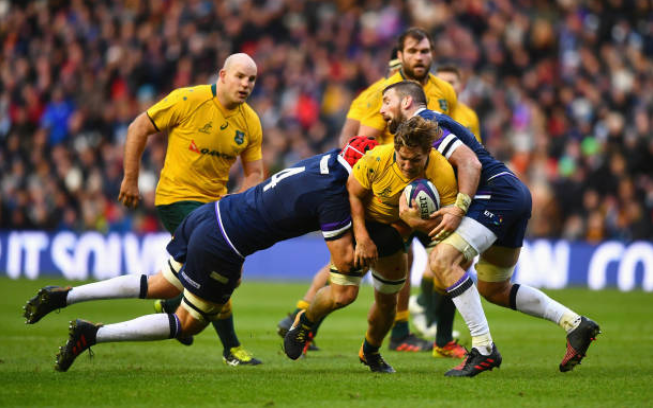 The Scotland coaches will have a few headaches when trying to pick their starting 2nd rows for the Six Nations. The Edinburgh man was extremely solid today if unspectacular. He didn't seem to put a foot wrong all day as he contributed to a fantastic performance from a formidable Scottish pack. He made 13 tackles in defence, including a fantastic effort on Kurtley Beale early on after Byron McGuigan came off his wing but missed his man.

5. Jonny Gray - Scotland
As usual the second row led from the front today. He made 16 tackles in defence, worked tirelessly at the breakdown and performed well at the lineout. The Scottish talisman even managed to get over for a try today, as he ran a clever line off of Ali Price's pass to go straight through from close range.
6. Maro Itoje - England
The nominee for World Rugby Player of the Year was on top form again today, as he displayed his amazing athletic ability around the field and showed off his rugby nous. He set up the first try intelligently as he picked from the back of a ruck, going straight through a gap before offloading to Mike Brown to get the ball rolling. He was Jamie George's primary target in the lineout and didn't disappoint as he won all of his ball, including a picturesque take which he had to really stretch to get. He ran well in attack as well making 31m and 2 clean breaks, looking unfazed by the incredible tackling strength of the Samoans.
7. Sean O'Brien - Ireland 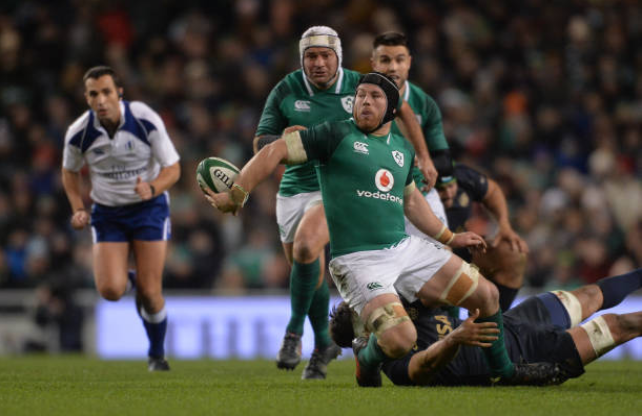 A hugely physical performance from O'Brien against a strong Argentinian back-row. Made 8 carries, making 21 metres going forward but it was his defensive performance which stood out. Made 14 tackles, with only Bundee Aki making more with 15. Made some nice steals in defence also, forcing the Argentinians to knock on.
8. Jack Lam - Samoa
The Bristol back row was the standout performer for the Samoans at Twickenham today. His work at the breakdown was unbelievable as he won a number of crucial turnovers, which stunted England's momentum and kept his side in the game. He was also his side's primary ball carrier in attack, making 53m and 3 clean breaks. It would be a joy to watch him in the Premiership next season if Bristol can achieve their goal of promotion.
9. Baptiste Serin - France 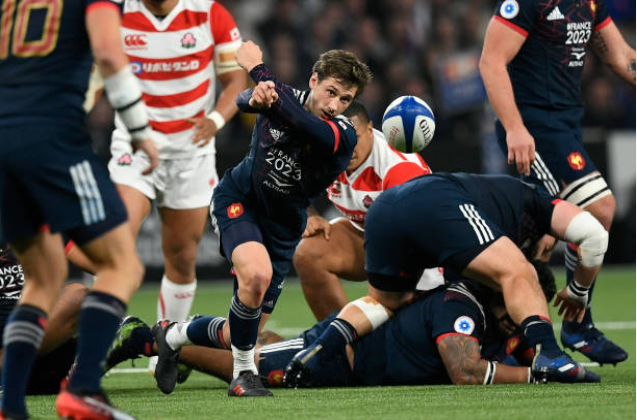 The scrum-half was the shining light in yet another lacklustre French performance. He marshalled the French pack well and cleared the ball from danger on a few occasions. He was a threat to the Japanese defence until his forced substitution on 65 minutes and made 49m from clever snipes around the ruck area. France really have an embarrassment of riches at halfback.
10. George Ford - England 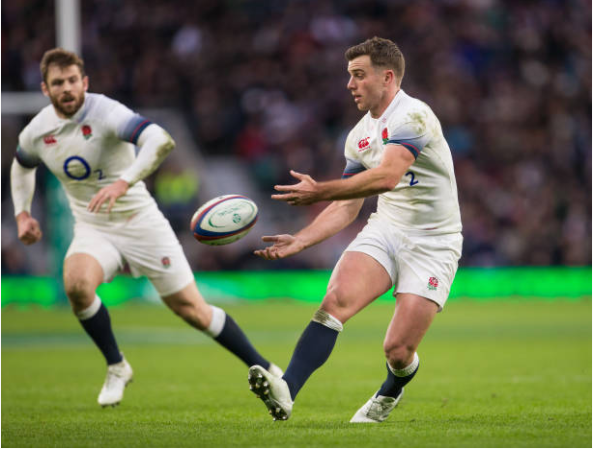 The young out-half really stepped up as a leader today as he co-captained the side with Chris Robshaw. He gave one of his most complete performances in an England jersey, which is even more impressive given the absence of Owen Farrell at 12 as a decision maker. He didn't put a foot wrong all day as he ran the back-line superbly and kicked intelligently, putting the Samoans under pressure. He often comes under criticism for his place kicking abilities but performed excellently in that regard as well, scoring 13 points and only missing 2 of his 8 kicks at goal. He was given the MOTM award for his efforts.
11. Rieko Ioane - New Zealand
The winger rounded off a fantastic November Series for the All Blacks with a MOTM performance in the Millennium Stadium. He scored two tries and setup one for Anton Lienert-Brown with a sublime offload after he sucked in 3 defenders. His immense pace was on display for both of his tries as he read a pass from Dan Biggar perfectly to intercept and run away to score the first. The 2nd came off of a fantastic back-line play. He received the ball from his scrum-half out the back before beating the Welsh cover defence to put the result beyond doubt. An honourable mention must be given to Jacob Stockdale who performed brilliantly for Ireland as well.
12. Francois Venter - South Africa 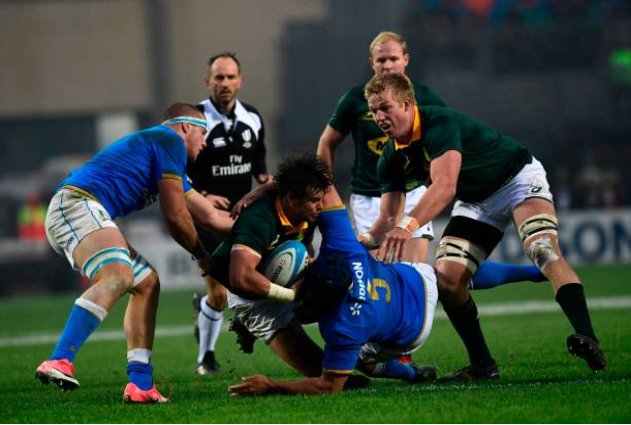 The Springboks really have gone out to prove a point following their embarrassing loss to Ireland in the first game of their tour. Their inside centre looked like a man on a mission today as he carried hard to the line all game. He made 39m and 2 clean breaks, managing to get over for a try for his side in the process. He was his side's top tackler in the backline, successfully bring down 14 Italian attackers during the game.
13. Huw Jones - Scotland
Deservedly went over for Scotland's 4th try, beating his man easily, showing his fantastic attacking ability. He threatened the Aussie defence every time he got his hands on the ball, freeing up space out wide which led to linebreaks and tries for his back three. Kuridrani was probably Australia's star performer but he was completely outshone by the young Scot.
14. Byron McGuigan - Scotland
Having been called into the starting line-up very late due to a Stuart Hogg injury in the warmup, the Sale winger put in a man of the match performance. He made two clean breaks, beating countless defenders and scoring two excellent tries. Honourable mention must go to Elliot Daly, who grabbed a brace for England and Waisake Naholo, who bagged a couple for the All Blacks.
15. Kotaro Matsushima - Japan
The fullback was the stand-out performer in an impressive Japan side. He made the initial break which led to Japan's opening score and was a constant attacking threat throughout the game, making 100m, 2 clean breaks and beating 3 defenders. He looked extremely safe under the high ball and was solid when forced into making tackles in defence.