Bulls and Springbok flyhalf Handre Pollard has been brought into the Bulls starting line up to face the Highlanders on Friday at Forsyth Barr Stadium in Dunedin.

The pivot missed the last two matches on tour due to injury, and returned to South Africa, but he rejoined the squad earlier this week and has been included in the starting line up in a much-changed backline from the one that drew against the Blues a week ago.

Pollard's inclusion in the starting line up sees Manie Libbok drop to the bench for the Bulls final match on tour. The game is an important one for the Bulls as they sit 7 poins adrift of conference leaders the Jaguares and are still in with a chance of making the playoffs.

Divan Rossouw (for Warrick Gelant) and Dylan Sage (for Rosko Specman) will join Pollard (replacing Manie Libbok) in the starting line-up. Sage will move to outside centre, while Johnny Kotze moves one out in place of the injured Specman.

Human also recalled Embrose Papier to partner Pollard at halfback, with Ivan van Zyl moving to the bench and Andre Warner missing out. 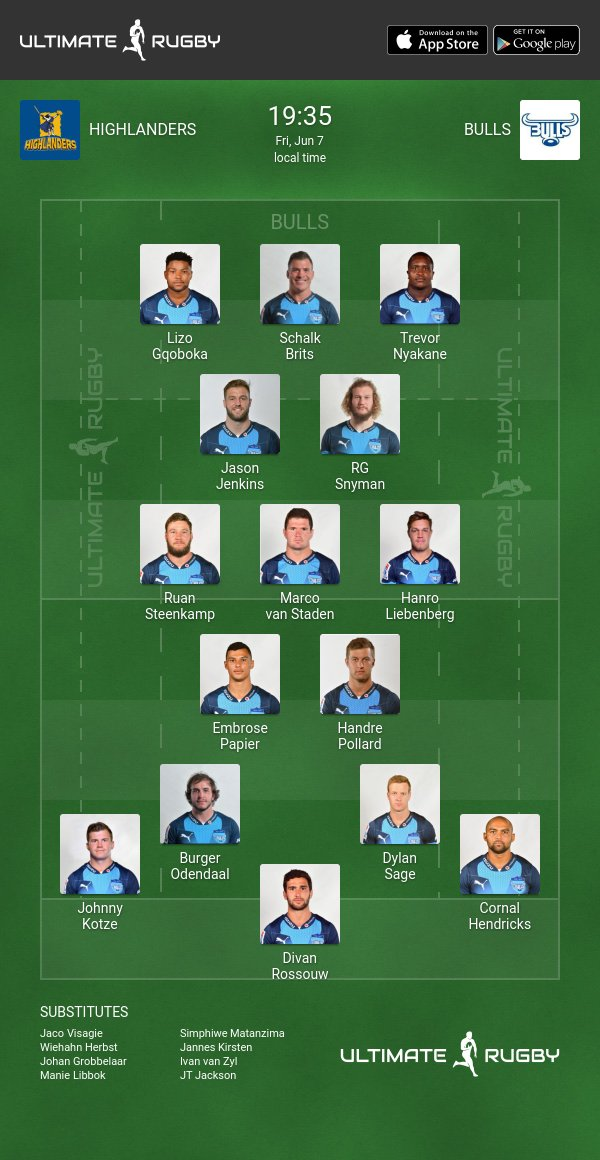 The loose trio that finished the game against the Blues will start against the Highlanders. Marco van Staden will play at no 8 in place of injured Paul Schoeman, with Hanro Liebenberg and Ruan Steenkamp on the side of the scrum. The tight five remains intact.

Human said the tour provided some good results, but can only be seen a successful one if they get the desired outcome against the Highlanders.

"This is going to be very tough for us, but this group thrives on challenges. I think they last lost to a team from outside New Zealand in 2016, so we need to be at our very best if we want to change that statistic."

Pollard said he is keen to get back onto the field.

"The short break was great and I am happy to be back. This is a great venue to play at and we are determined to make our visit a productive one. We last won here in 2007, so it is about time we change that."