Although there was doubt earlier in the week, Exeter and Wasps will battle it out in the Premiership final on Saturday.

After an outbreak of COVID-19 in the Wasps ranks, a further round of the PCR COVID-19 screening programme produced no further players or staff had tested positive ahead of the clash. This let Bristol off the hook as they were on standby for the final had Wasps not been able to field a team for the encounter.

The clash at HQ will be officiated by Craig Maxwell-Keys who will take charge of his first-ever Premiership Rugby final after Wayne Barnes pulled out of the fixture having tested positive for COVID-19.

Exeter will be hunting for their maiden European-Domestic double having beaten Racing 92 in the Champions Cup Final last week but face a Wasps side that will be looking to claim their 7th Premiership crown and first since 2008.

Wasps ran out comfortable 46-5 victors the last time these two sides met in the final round of the regular-season but Lee Blackett's side will know they face a very different Exeter side on Saturday.

Rob Baxter rested a number of top players for the clash as his side faced a busy schedule with a Premiership semi-final as well as the Champions Cup final on consecutive weekends following the clash against Wasps.

It was a very different result when the sides met at Sandy Park in December last year as Exeter ran out comfortable 38-3 victors over Wasps.

Saturday's clash is a replay of the 2016/17 final which saw Exeter edge Wasps 20-23 to win their first-ever Premiership title.

What the coaches say:

Wasps Head Coach, Lee Blackett: “If we are all being honest, it hasn’t been ideal preparation, but I have to give credit to the players because they have coped with it admirably.

“A lot of credit must also go to the staff, especially Team Manager Dave Bassett, Head of Medical Ali James and Club Doctor Ralph Mitchell. The amount of work that they have put in behind the scenes to allow us to play in this game is phenomenal.

“It has been a difficult week in terms of all of that, but the one thing that we spoke about at the start of the season is being adaptable. Now the players will do everything they can to put in a performance on Saturday. We know it will be tough, Exeter deservedly finished top of the league this season, but we are confident with the form that we can take into the game.”

Exeter Chiefs Director of Rugby, Rob Baxter: “We’re one game away from doing the double, but experience has taught me many teams that dreams don’t count for much, it’s the hard work you put out on the field which makes it all happen. All we can do is hope and pray that the team make it happen on Saturday and that we win the final.”

Although victorious, Baxter has made changes to his winning formula of a week ago. Up front, Sam Skinner takes over from his Scottish international team-mate Jonny Gray, while Jannes Kirsten is preferred to compatriot Jannes Kirsten in the back-row.

Behind them, Ollie Devoto comes into the centre alongside Henry Slade, while Olly Woodburn is given the nod over Tom O’Flaherty on the right wing. With the exception of O’Flaherty, Gray, Vermeulen and Ian Whitten all drop to the bench, alongside Gareth Steenson, the club’s record points-scorer, who will be making his final appearance in a Chiefs jersey.

The Ulsterman is set to join the club’s coaching team next season after 12 years of service with the Chiefs. During that time he has amassed 311 appearances, scored 2,630 points, and helped the club out of the Championship and onto title success in the Premiership, Anglo-Welsh Cup and, most recently, Champions Cup. 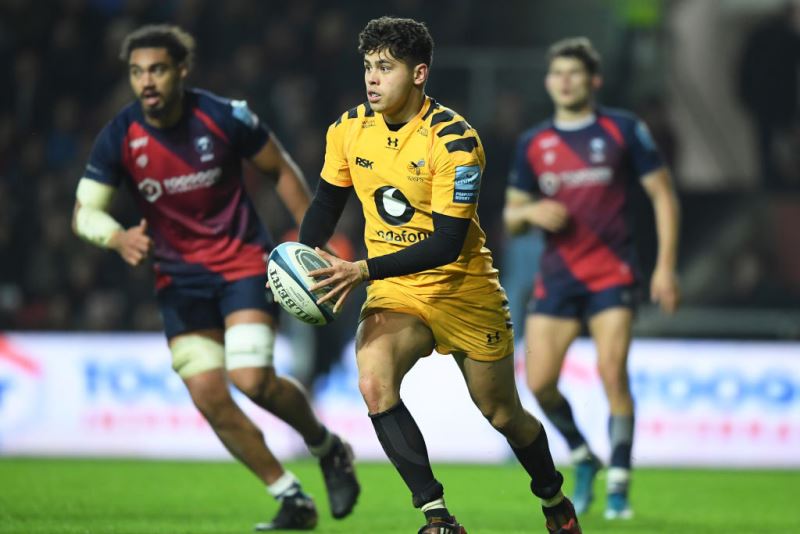 There are four changes to the starting line-up that beat Bristol Bears in the semi-final. Tom Willis starts alongside brother Jack and Thomas Young in the back-row. In the front row Jeff Toomaga-Allen and Tom West come into start with Tommy Taylor.

Wasps’ second row engine room sees international duo Will Rowlands and captain Joe Launchbury link up once more. Juan de Jongh joins Jimmy Gopperth in the centres. The rest of the back-line remains the same with Dan Robson and Jacob Umaga linking up at half-back and the back-three of Josh Bassett, Zach Kibirige and Matteo Minozzi will look to excite again.

Amongst the replacements Ben Morris is the back-row cover on the bench. Joining Morris on the bench are experienced lock James Gaskell and the power-packed trio of front row replacements Gabriel Oghre, Ben Harris and Biyi Alo.  Electric backs replacements Ben Vellacott, Lima Sopoaga and Michael Le Bourgeois will also get a chance to grace the Twickenham turf.

Brad Shields, Kieran Brookes, Simon McIntyre and Alfie Barbeary are unavailable after being ruled out due to contact tracing protocols. Malakai Fekitoa misses out through a groin injury picked up against the Bears.

The line ups for tomorrow's #GallagherPremFinal 🏆 Who is winning it? 🤔 #EXEvWAS