All attention will turn to the Twickenham Stoop, 159 days after the last Premiership Rugby match was staged.

Before Premiership Rugby was suspended, Sale Sharks were one of the form teams, only losing one out of their last six matches, while Harlequins have lost just once to the Sharks at the Twickenham Stoop in Premiership Rugby since 2008.

Following the opener in west London there will be four compelling matches on Saturday at Bath Rugby, Worcester Warriors, Bristol Bears and leaders Exeter Chiefs before the weekend ends at Franklin’s Gardens where Northampton Saints face Wasps, and today Premiership Rugby is announcing the next four rounds of Premiership Rugby, which take us to the end of August.

Darren Childs, Chief Executive at Premiership Rugby said: “With just over a month to go, we are delighted to be on track to bring rugby back to fans and see our players out in competition. The good news I can bring is that the Gallagher Premiership will be back a little earlier than we previously announced with the first game scheduled on 14 August. I must thank all of our players, clubs, partners, the RFU and RPA who have all supported us on this journey, and we are now cautiously optimistic for a safe return to the season." 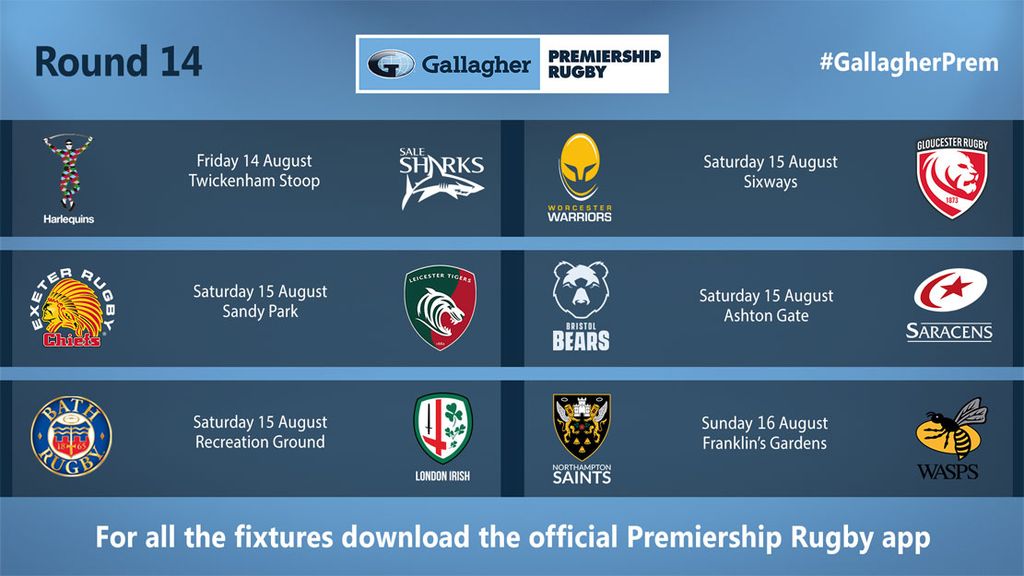 Chris Mead, Chief Marketing Officer for Gallagher said: “We, like millions of fans, have missed the energy, excitement and entertainment of Gallagher Premiership Rugby, so to know the season will be starting up again in just a matter of weeks, along with having a date in the diary for the Final to bring the season to an end is fantastic news.

"As title partner of the league and as one of the world’s largest insurance and risk management consultants, we are committed to supporting Premiership Rugby and each of the Premiership clubs as they work through the restart plans.”

Harlequins Head of Rugby Paul Gustard said: “We are delighted to be the first club back hosting a fixture as the Premiership recommences. It has, of course, been an unprecedented time – the global impact of COVID-19 has been seismic.

“We are all excited to have the opportunity to represent the Club and look to push on in the second half of the season. It is brilliant that we get to run out at The Stoop once more. We are hugely thankful for the goodwill of our owners, the support of the board and the continued generosity of our amazing supporters.

“We also recognise and are grateful for all the hard work undergone by the game’s key stakeholders. They have played significant roles in getting us back out on the field from - the lengthy work of Premiership Rugby, the RFU, BT and Gallagher to namecheck just a few.”

Steve Diamond, Director of Rugby, Sale Sharks added: “It’s fantastic that we have the opportunity to return to play after such a long lay-off, I think everyone across the league is chomping at the bit to get going again. It’s been a turbulent period for everyone, but as a club we feel we have come out of the other end of this period stronger than ever.

“We have a top bunch of players here and all the lads have put their hands up and worked hard for the club during our return to play preparations, we are ready and raring to go so I think it will be a great occasion at The Stoop on Friday 14 August.”

The next announcement will involve the live TV selections for both BT Sport and Channel 5, followed by the next four rounds of Premiership Rugby.

For all the Gallagher Premiership Rugby fixtures click here