PRO14 - Team of the Weekend

The Cheetahs loosehead has took to the Pro 14 like a duck to water this season. He is a different type of prop to many of his opponents in the league. His abilities in the loose make him a vital asset to this Cheetahs side, who look to keep the game open and play at pace. Again, he made great yardage with ball in-hand, trucking up 9 times for a total of 23m. He also won a crucial turnover for his side in the first half to keep his team on top.


The Blues hooker was called upon quite early due to an injury to Matthew Rees that put him out of the game. The substitute looked to grab his opportunity as he tackled like a man possessed, making 17 out of 17 attempts in his 70 minutes on the field. He also managed to get over for his own 5 pointer as he ran a great support line to receive the offload from Jarrod Evans to dot down. Another 10 carries took his total to 27m for the day.

Glasgow ran away with the victory in Scotstoun on Friday night, and a solid platform at the scrum allowed their backs to do the damage out wide. The tighthead was indispensable in that regard and also had a great performance in the loose. In many ways he emulates Tadhg Furlong in his work around the field, making numerous tackles and being one of his side’s go-to ball carriers to get over the gainline. His try was a trademark pick and go from close range, which added to the Warriors total tally of 68 points.

The second row was unfortunate to receive a yellow card in the 2nd half, but it was absolutely impossible to leave him out of our TOTW given his fantastic attacking performance. His stats would compare to those of a back-three player as he made 93m from 8 carries, beating 3 defenders and making 3 clean breaks.

The Welsh captain is finding some great form coming into the business end of the season. He has adapted his game expertly to continue to be a world-class performer, even with some losses in athleticism that have come with age. His deft handling is a great asset to the Ospreys and it helps them shift the ball from the inside of the park to the outside channels, where their dangerous, open-field runners can threaten. He won a crucial turnover for his side when he pounced on the loose ball and offloaded in one movement, in the first half. As usual, he didn’t miss any tackles in defence, and looked to carry often.

The Edinburgh blindside was deservedly awarded MOTM with a brilliant defensive display from the young back rower. With 13 tackles, Bradbury helped inspire an Edinburgh side to a tight away win. It was the persistence of his team in defence that ultimately led to their victory. They traded the lead with their hosts a couple of times in the harsh weather conditions in Galway, before taking the lead with less than 10 minutes left on the clock. Bradbury also carried with great intensity and disrupted Connacht in the air at the lineout. 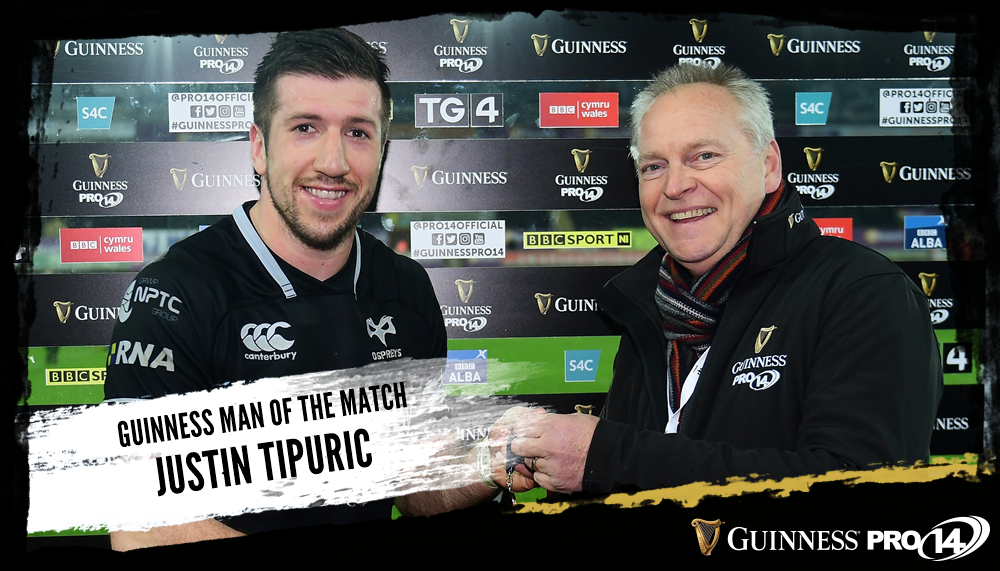 The Ospreys look like they have finally turned their period of poor form at home around, as they put the high-flying Leinster to the sword today in Swansea. Their openside was a standout player as he played with great versatility, exploiting gaps in the Leinster defence out-wide and disrupting their ball at the breakdown. His offloading game in the outside channels created lots of opportunities for his back-three to break and led to a try for Dan Evans in the first half. He managed to get over for his own try just after the break, as he ran a great support line to receive the offload from Fonotia and dive under the posts for the try.

Munster impressively shut down the league’s best attacking team on Saturday as they claimed a 19-7 win in Thomond Park. The number 8 was given the MOTM award for his performance in the top of the table clash. He scored the final try of the game as he hit the defence on a hard line to barge his way over. 33m from 5 carries is quite an impressive return in attack. He also performed a couple of successful pilfers to win the ball back for his side and limit Scarlets opportunities to get back in the game.

Another Glasgow player that may have gone under the radar on Friday night was their competent halfback. He managed to score a fantastic try from a clever snipe close to the line. He also made another clean break which took his total to 55m gained for the evening. He also created another couple of tries from pinpoint accurate passes. His decision-making at the breakdown kept the Glasgow attack flowing, which led to a record-high points-tally for the season.

The young out-half was the standout performer as his side cruised to victory against Ulster this afternoon. He made two clean breaks, beating five defenders and gaining a total of 52 metres. He showed great footwork to dance around the Ulster defence to score a try after just two minutes of play. He slotted six of his seven attempts at the posts and recorded a perfect tackle success rate on his way to a well-deserved man of the match performance. 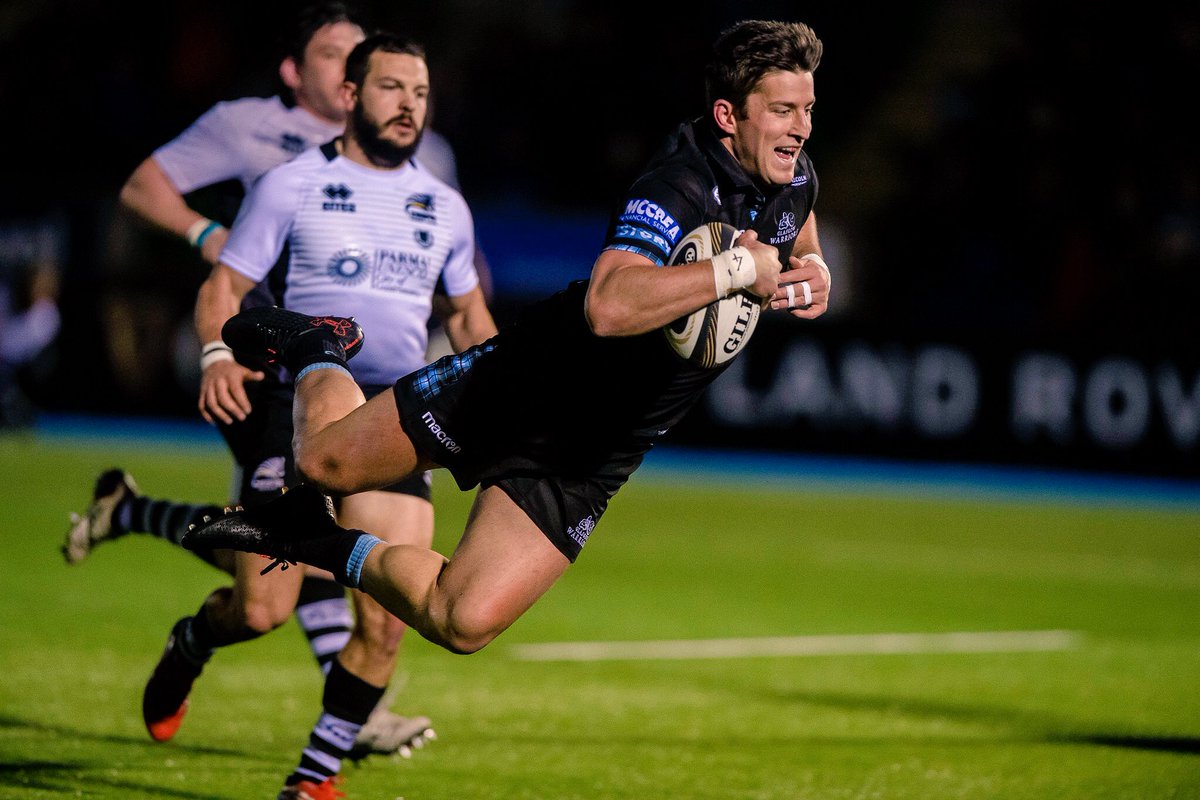 It's like he was never gone at all! Van Der Merwe was a clear man of the match as he completed a dream return to Glasgow. Scoring two tries, DTH carved up throughout the whole game and stood out in an excellent team performance. He made 2 clean breaks and finished them both, which is all you can really ask of from a winger.

Cardiff ripped Ulster to pieces in Arms Park on Saturday and both Halaholo and Lee-Lo had a field day, opposite an Irish international centre partnership. The former Hurricane made 2 clean breaks, beating 4 defenders and 49m for the Blues. He also had 90% tackle success rate and made a turnover in defence to aid his team with an impressive home victory.

It would have been unfair to pick one over the other after their fantastic duel in Swansea on Saturday night. O’Loughlin tried to shut down the Samoan international from the start, getting up in his face and chopping him low. Despite that, both found areas to exploit in attack for their respective teams throughout the match.

O’Loughlin scored a fantastic try off of a grubber through from Luke McGrath, made a couple of clean breaks, beat 3 defenders for 61m.

Fonotia threatened all night, making 3 clean breaks and setting up a couple of tries with his great offloading game. He gained 55m as he penetrated the defence with clever running and support lines and made a couple of turnovers.

The USA captain is having a great season on this side of the water. He scored one try after some great work by Reynold Lee-Lo put him away down the outside. He beat a further 7 defenders and made to clean breaks to help his side put Ulster to the sword in Cardiff. He will most definitely be one to watch in the World Cup in Japan next year.

Two fullbacks stood out for their respective clubs this weekend and it would be cruel to not pay homage to both of them.

Hayward was a revelation for Benetton in their away victory over the Southern Kings. Though he didn’t get over for a try, he set up a number of them with clean breaks on the counter attack. He broke the line a total of 4 times, beating 8 defenders along the way for a total gain of 129m.

Cheetahs’ fullback Blommetjies was this weekend’s top carrier, making a ridiculous 173m for the Bloemfontein-based side on Friday night against the Dragons. He managed to get over for a try himself, while beating 6 defenders and making a couple of clean-breaks. He is one to watch for the rest of the season if he can keep up this sort of form.