Pumas aim to claim one final scalp in 2022 at Murrayfield

It's been a fruitful first year in charge of Argentina for Michael Cheika, who will be out to claim one final scalp at Murrayfield.

Cheika's side started the year strongly defeating Scotland twice in a three-match series before going on to claim wins over the Wallabies and All Blacks in the Rugby Championship, the latter in New Zealand.

They kicked off their Autumn Nations Series with a first win since 2009 over England and the first at Twickenham since 2006. A loss to Wales followed but the Pumas weren't far off in Cardiff going down 20-13.

Meanwhile, Scotland fell to a narrow 15-16 loss to Australia in the opening game of the Autumn Nations Series before bouncing back to defeat Fiji 15-16.

They produced a promising performance against New Zealand and looked on the cusp of a first-ever win before the All Blacks scored tries in quick succession to complete a 23-31 win.

Looking ahead to the match, Scotland head coach Gregor Townsend has made just two changes to his starting lineup.

Injured Hamish Watson has been replaced by Jack Dempsey who earns his first start for Scotland with Matt Fagerson shift to the side of the scrum.

The only other alteration sees Jonny Gray stepping in for his suspended brother Richie in a straight second row swap. 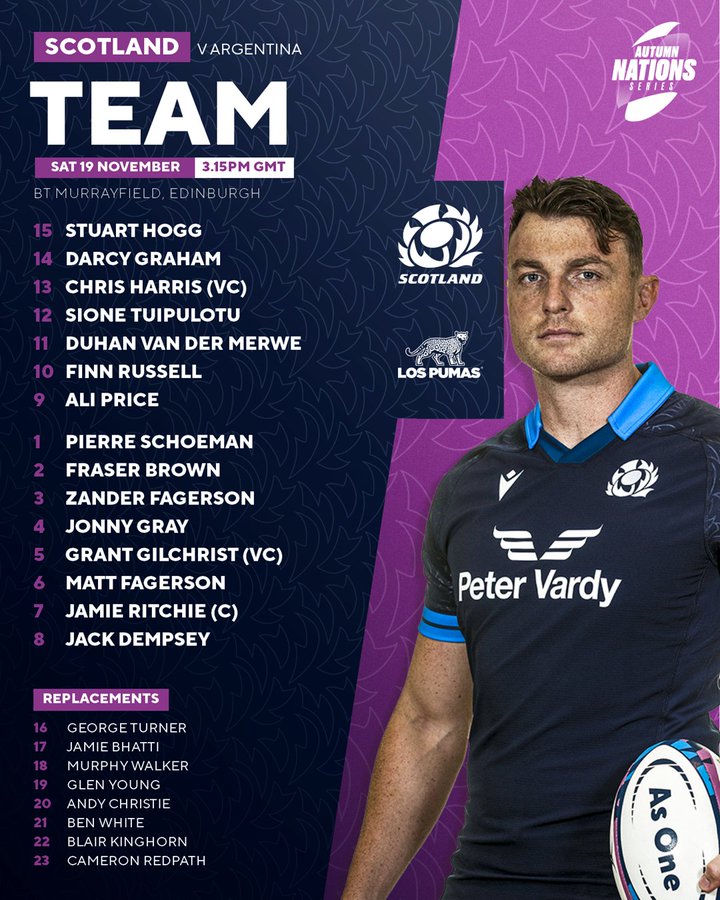 Cheika has made four changes to his starting with Julian Montoya returning as skipper. Stay in the front row, Eduardo Bello who replaces Francisco Gomez Kodela.

Mateo Carreras is not involved in the matchday 23 altogether, with 25-year-old Bautista Delguy earning his first start since the third Test against Scotland in the summer. Matias Orlando starts at outside centre with Matias Moroni on the replacements bench.

Also in line for a first appearance since the 2-1 series victory is experienced fly-half Nicolas Sanchez who suffered a torn calf muscle in the first Test. 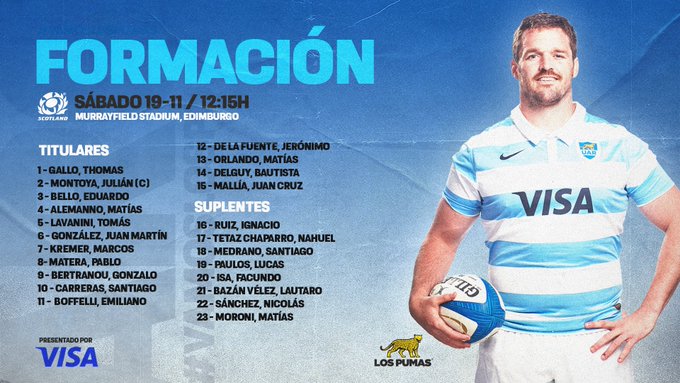 Gregor Townsend ahead of the match: "They are a very good team, they were really good in the summer and they've carried that form on into the Rugby Championship and they obviously had that cracking win against England a few weeks ago.They are rightly one of the best teams in world rugby right now."

Michael Cheika is expecting a difficult game because he says "Scotland are always a tough test, especially at Murrayfield".