The Teams for Saturday's PRO14 Rainbow Cup have been confirmed.

Kieran Crowley will look to end his time as the Benetton coach with a bit of silverware and has named a strong squad to take on the Bulls. Captain Dewaldt Duvenage is the only non test player in the starting backline that sees him link up with Paolo Garbisi as the halfbacks.

Monty Ioane and Edoardo Padovani provide pace on the wings with Jayden Hayward at fullback for the side. Italian internationals Marco Zanon and Ignacio Brex combine in the midfield.

Sebastian Negri plays his 50th game for the side and is joined in the back row by Italian international Michele Lamaro and the abrasive Toa Halafihi.

Federico Ruzza and Niccolò Cannone combine in the second row while starting hooker Corniel Els has a crack at his former employers. Els is flanked by Marco Riccioni and Thomas Gallo in the front row.

Former Bulls lock Irne Herbst also features on the bench for the Italians.

Bulls Director of Rugby Jake White has named his strongest possible squad to hunt for gold at the end of the Rainbow, given the exclusion of players called up for Springboks and Blitzboks duty and those ruled out due to injury.

White has made three changes to his starting lineup that did battle against the Sharks a week ago, with Chris Smith getting into the number ten jumper in the absence Morne Steyn. Nizaam Carr starts on the openside with Marco van Staden also at the Boks and Jan Uys slotting in at lock in the number five jersey with Janko Swanepoel dropping to the bench.

The remainder of the backs stay unchanged with the electric trio of outside backs, David Kriel, Madosh Thambwe and Stravino ‘Rocket-man’ Jacobs, looking to continue expressing themselves and enjoying the ball. The midfield duo of in-form Cornal Hendricks and Marco Jansen van Vuren resume their solid partnership, while Springbok scrumhalf Ivan van Zyl will run out for his last Pro Rugby match for the Bulls.

Marcell Coetzee once again leads from the back of the scrum, with Carr and Ruan Nortje rounding up the loosies. Jan Uys gets his first run-on for the competition partnered by Walt Steenkamp. Mornay Smith, Johan Grobbelaar and Gerhard Steenekamp are rewarded for a great season with retaining their front row spots.

On the bench we see the return of Springbok prop Lizo Gqoboka and the inclusion of Zak Burger as well. 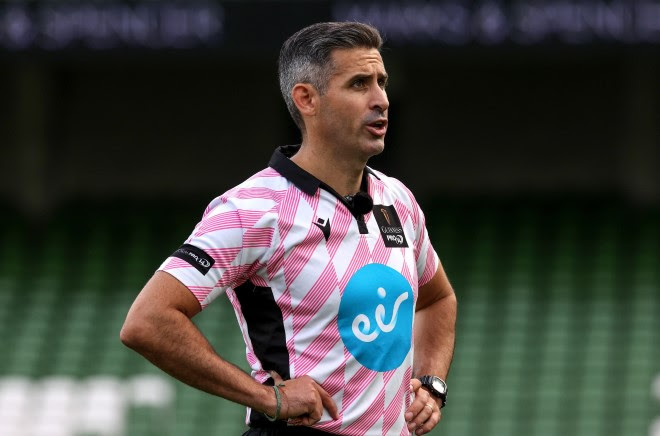 Frank Murphy has been appointed to referee the PRO14 Rainbow Cup Final between Benetton Rugby and the Bulls on Saturday.

It caps a remarkable rise from his professional playing career to refereeing with the Irish official having played his final game in 2014. The 38-year-old played for Munster, Leicester Tigers and Connacht as a scrum-half and made his Guinness PRO14 debut two years later taking charge of Dragons v Edinburgh.

Since then Murphy has gone to make 48 appearances as a match official in the league, has officiated Heineken Champions Cup games and will also take charge of South Africa's second Test with Georgia next month.