The Red Roses play USA, Canada and Ireland in the three-Test series at Allianz Park, Castle Park and Twickenham Stadium this November.

In addition, Wasps scrum-half Claudia Macdonald, Gloucester-Hartpury centre Tatyana Heard and Loughborough Lightning centre Carys Williams will all be looking for their first appearance for the Red Roses.

Alongside the new talent are a number of established players with long-time Red Rose captain Sarah Hunter again named to lead the side. Katy Daley-Mclean will make her 100th international appearance if named to play in one of the three games.

Vicky Fleetwood (Saracens), Sarah McKenna (Saracens) and Lydia Thompson (Worcester Valkyries) will be looking for their first international 15-aside starts since the 2017 Women’s Rugby World Cup having returned to the 15-aside setup after time in the England Sevens programme last season.

England Women open their campaign against USA at Allianz Park on Friday 9 November.

“As a group, we are really looking forward to getting the Quilter Internationals underway and performing to our maximum," said Middleton.

“We have made a number of changes within the squad, with 12 new faces named since the 2018 Six Nations. While there is a great feel of youthfulness, with seven players fresh from the Under 20’s summer tour, we have critically been able to retain a number of world class performers from the 2017 Women’s Rugby World Cup, ensuring an essential balance of quality, youth and experience.

“As we start our journey towards the 2021 World Cup, the focus over the Quilter Internationals is not only on winning but performance. We have reshaped our game and we will be looking to see which players can bring the plan to life in the intensity of an international match environment.

"With full-time contracts on the horizon and a great season of international rugby in front of us, the challenge and opportunity is there for individuals to stake their claim as a Red Rose.” 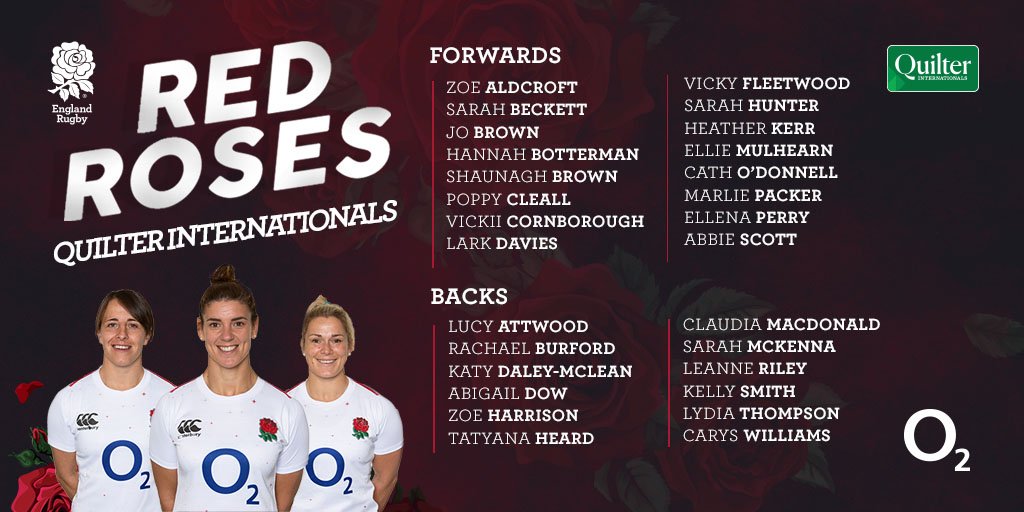