Mounga and Drummond both came on in the second half in Canterbury’s 43-29 win over North Harbour in Albany, while Saturday’s game will be Christie and Jager’s first in Canterbury colours for 2020.

"We’ve been targeting this game as a return for a lot of these guys. They’ve had an extra week to get familiar with a few new systems and it’s a Shield Game! So, we’re going to throw everything at it," said Coach Reuben Thorne.

Isaiah Punivai, has also been rewarded with a start in the number 13 jersey following his Man of the Match performance in Albany, replacing Dallas McLeod who is unavailable due to a toe injury.

Beauden Barrett and Richie Mo'unga are set to battle it out for one New Zealand's prized trophies this weekend #RanfurlyShield #CANvTAR @crfu @TaranakiRugby https://t.co/aXLllGGcfL

"We were really impressed with Isaiah on Friday, he came on and performed extremely well, so deservedly gets another opportunity," Thorne added.

New Zealand Sevens rep Andrew Newstubb is set to earn his first start in the Mitre 10 Cup, providing cover for the outside back while Ereatata Enari and Brett Cameron will wear 20 and 21 respectively.


"The Ranfurly Shield is a really special part of rugby history here in New Zealand and in Canterbury, and we want nothing more than to continue to hold onto it. The players feel that sense of occasion and are really excited about the opportunity," said Thorne. 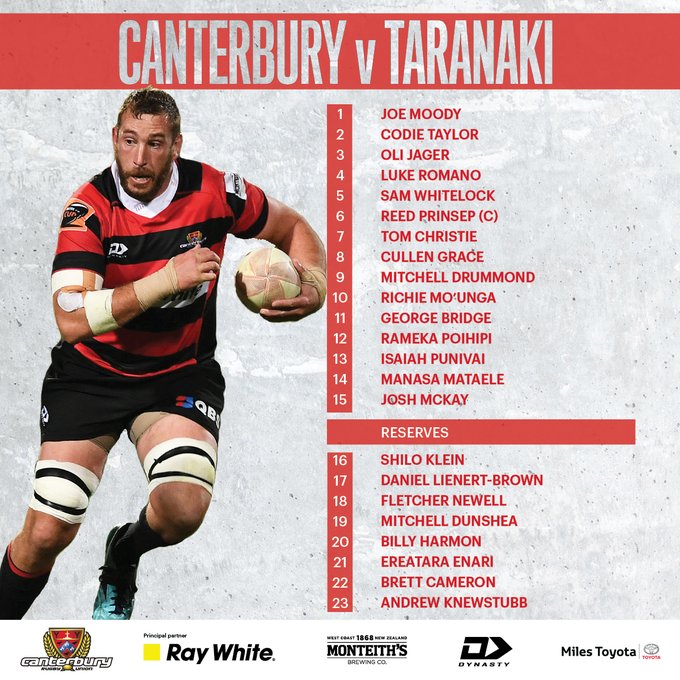