The Pool 4 confrontation is only one of a host of top-quality matches in the fixture schedules for all six rounds of the 2019/20 Champions Cup and Challenge Cup which have been announced by tournament organisers EPCR.

Leinster Rugby, the reigning PRO14 champions, take on Benetton Rugby, who last season became the first Italian club to qualify by right for Europe’s top tier, at the RDS in Pool 1 on Saturday, 16 November and the Irish province will then come up against a resurgent Northampton Saints in the key December back-to-back matches.

ASM Clermont Auvergne, who won the 2019 Challenge Cup in such impressive style, will once again pack out the Stade Marcel-Michelin for their opening Pool 3 game against Harlequins also on Saturday, 16 November.

Other highlights of the crucial back-to-back fixtures in Rounds 3 and 4 include the meetings of Munster Rugby and Saracens, as well as the head-to-heads between Bath and Clermont, Glasgow Warriors and La Rochelle, and Harlequins and Ulster.

This season, the Challenge Cup has seven former European title winners – Brive, Cardiff Blues, Leicester Tigers, Pau, RC Toulon, Stade Francais Paris and Wasps – in its ranks and the tournament kicks off on Friday, 15 November with the Pool 1 meeting of Enisei-STM and Worcester Warriors in Krasnodar, the clash of Agen and Edinburgh Rugby at Stade Armandie, as well as the all-French match-ups between Bayonne and RC Toulon, and Stade Francais Paris and Brive.

Also in Round 1 on Saturday, 16 November, Leicester take on Pau at Welford Road, the Scarlets and the Dragons are at home against London Irish and Castres Olympique respectively, Wasps are at Bordeaux-Bègles, Bristol Bears host Zebre Rugby Club and the Cardiff Blues make the journey to Rugby Calvisano.

In addition, EPCR have confirmed that for at least the 2019/20 season, a player who is a UK citizen will be regarded as a European player for the purposes of its tournaments.

CHAMPIONS CUP ROUND ONE FIXTURES 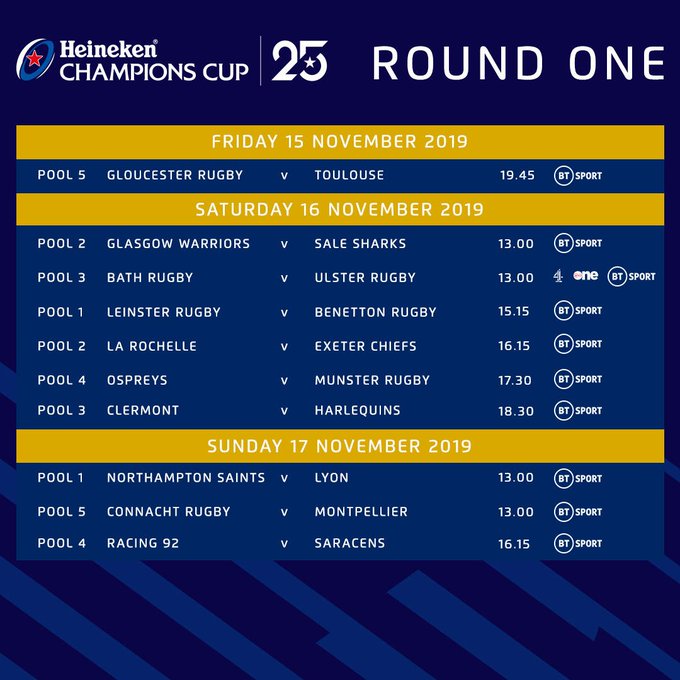 CHALLENGE CUP ROUND ONE FIXTURES 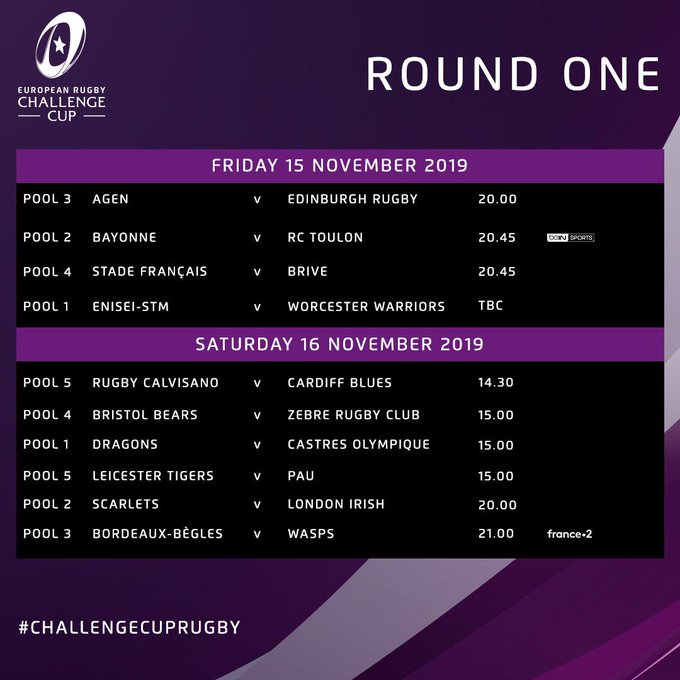