Six Nations Team Of Round Two
Another weekend of Six Nations rugby has come and gone with France claiming a bonus-point victory over Italy, Ireland handed Wales a first Six Nations defeat in nine matches and England regained the Calcutta Cup with a 13-6 defeat of Scotland at a sodden Murrayfield.
With the action done and dusted, France top the standings heading into the week off with Ireland level on points but trail on points difference.

WATCH: RASSIE ERASMUS' SPEECH TO THE SPRINGBOKS BEFORE THE WORLD CUP FINAL

There were a number of outstanding performances and we have sorted through them all to select our team of the week:
1. Mako Vunipola - England
England's forwards were made to work hard for their victory and Mako Vunipola epitomised the packs' effort making 13 tackles and 5 carries.
He solidified the scrum without being too dominant and got stuck into the nitty-gritty of the game against Scotland in torrid conditions.
2. Jamie George - England
George hit his jumper with eight of his 10 lineout darts while also lending his weight heavily on defence making 19 tackles, just three less than Maro Itoje.
Rob Herring was solid once again for Ireland and narrowly misses out while the Sherriff was busy but not as effective as the pair mentioned before him.
France's Julien Marchand was sublime in open play but stuttered at the lineouts, which counts heavily against him.
3. Tadgh Furlong - Ireland
An inspired performance from the Irish tighthead sees him edge an equally brilliant game from France's Mohamed Haouas to a place in our side.
Both players were all over the pitch in their respective games and really there wasn't much to split them.
Furlong started slowly with an early scrum penalty going against him but he recovered to have an impressive game.
He was a huge in the contact areas and manage to barge over the line to score with some help.
4. James Ryan - Ireland
Hardly ever has a bad game and this weekend was no different. Tireless on both sides of the ball, was excellent at the lineout and carried the pack forwards.
5. Maro Itoje - England
Itoje just beats the impressive and ageless Alun Wyn Jones to a place in our side. Jones won praise for his offload in the build up to Tomos Williams' try and put in a heavy defensive shift.
However, he is beaten to the side by an outstanding game from Itoje. England knew that they were in for a real dog fight when they arrived at Murrayfield and saw the conditions that awaited them.
Itoje the dog that arguably had the biggest fight in him, he made a mammoth 22 tackles, missing one and won three turnovers while also hitting an enormous amount of rucks.
6. Jake Polledri - Italy
Peter O'Mahony was pencilled into our team of the week before the final game kicked off before Polledri starred in Italy's loss to France.
He was superb in defence, effective with ball in hand and gave Italy front foot ball with regular ease.
7. CJ Stander - Ireland 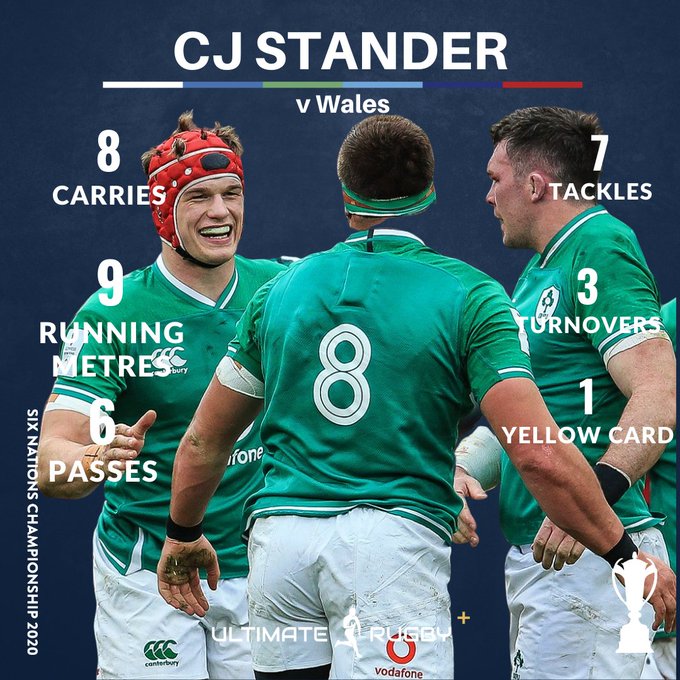 Two standout no.8s this week and it's the two that stood out last week mean that Stander once again features on the side of our scrum.
Both him and Gregory Alldritt were named man of the match in their respective games in the opening two rounds of the competition.
Stander was sublime in every facet of the game. The Limerick man battered the Welsh breakdown, sent bodies backwards with his carries and was furious on defence.
It's hard not to complete our team of the week without acknowledging the outstanding performance from Justin Tipuric in the same game.
8. Gregor Alldritt - France
Brutally physical and superbly skilful performance from the Frenchman no.8.
His ball carrying put France on the front-foot, he excelled in every single facet of the game.

A second man of the match award in as many weeks 🙌


9. Connor Murray - Ireland
Antoine Dupont almost nabbed the jersey off the Irishman in the final game of the weekend but a strong all round game secures his place in our team of the week.
Murray controlled the tempo of Ireland's attack well, kicked even better and did more than enough to keep his starting jumper when the competition resumes in a fortnight.
10. Romain Ntamack - France
While his halfback partner lost out to his Irish counterpart, Ntamack wins his tussle for the jersey with Jonathan Sexton.
Dan Biggar was bright and sorely missed for Wales after he left the field injured while Sexton marshalled Ireland to a convincing win, Ntamack was just in stellar form to grab the #10 jersey.
He scored a wonderful try, pulled the strings well on attack and scored 18 points as France went two from two to kick off their Six Nations.
11. Jacob Stockdale - Ireland
Wales afforded Stockdale space on the outside and the Irishman made them pay, racking up over 80 running metres making 4 clean breaks.
Josh Adams' game was cut short just 24 minutes into the game while the wingers saw little ball at Murrayfield.
Finally, Rattez and Minozzi did excite on Sunday but neither did enough to beat Stockdale.
12. Bundee Aki - Ireland
Some great kicking by the England captain almost got him a place in the side but Aki was excellent against Wales and retained his place for a second week running.
He tackled well, carried and tested at the breakdown securing his place in the side.
13. Arthur Vincent - France
Nick Tompkins impressed in his first game for Wales last week but failed to repeat that in his first start for the side while Vincent got just 45 seconds off the bench last week.
An injury to Virmi Vakatawa gifted the former France u20 captain the opportunity to shine and he grasped it with both hands!
He made some excellent defensive decisions and looks like a competent international despite his limited experience at the highest level.
Robbie Henshaw had flashes of brilliance before he was forced off the pitch.
14. Andrew Conway - Ireland
Arguably his best game in a green jersey. Conway was brilliant in all facets of the game.
He was great in the air, showed off his kicking ability with a lovely clearance and was a real threat on attacking and was rewarded with a try for his efforts.
He beats the solid Jonny May in testing conditions and the excellent Teddy Thomas in Paris.
15. Jordan Lamour - Ireland
Jason Hayward was excellent for Italy on the counter-attack while we did get to see more of the superb Anthony Bouthier but in the end it was the brilliance of Jordan Larmour that stole the show.
He stepped through the Welsh defence well and looks to have made the #15 jersey his own, particularly over the last two weeks.