15 Super Rugby teams have been narrowed down to just 8 teams who will battle it out to lift the Super Rugby trophy on 4 August.


Road to the Final: 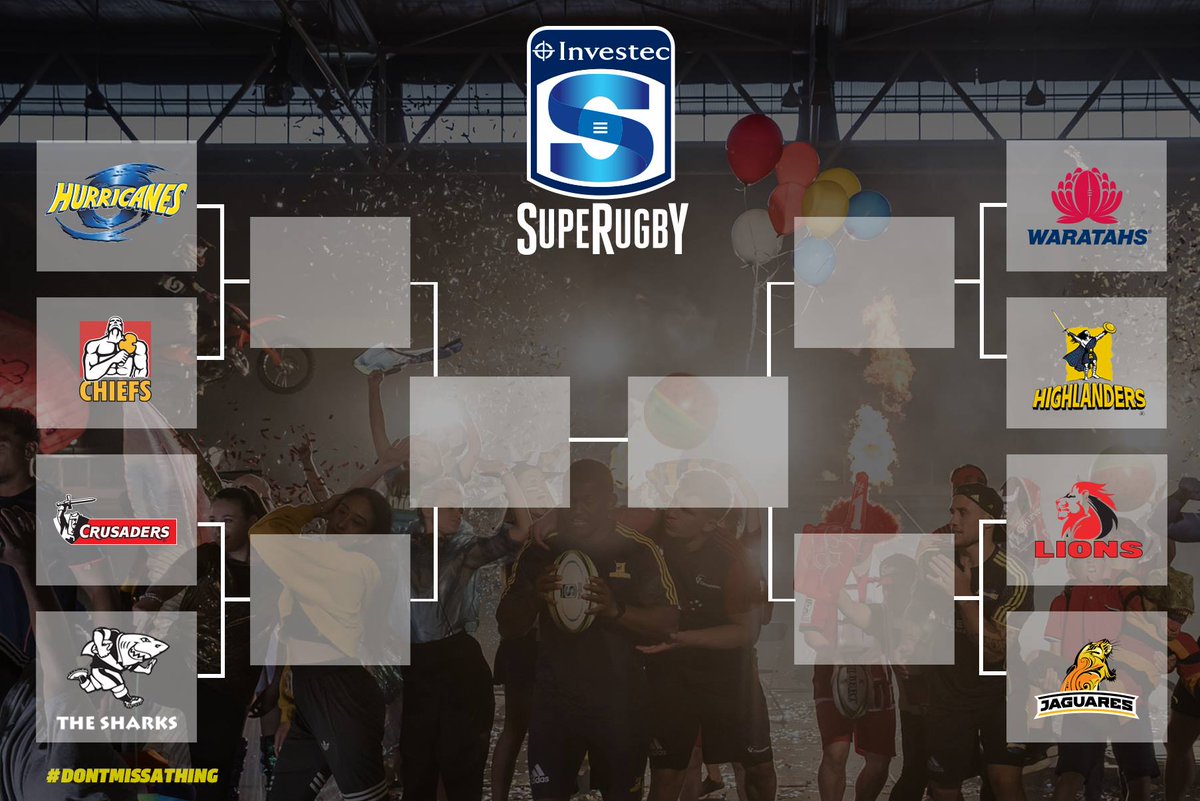 The Hurricanes and Chiefs will face off for the second time in as many weeks.

The Chiefs claimed 28-24 victory over the Canes but will be well aware that the Wellington-based side are a different beast at home and in playoffs.

The hosts are sweating on the availability of injured captain Brad Shields for the clash, while the Chiefs welcome back All Blacks Damian McKenzie and Sam Cane.

Shields suffered an injury to his ribs in last weekend and has been bracketed in the starting lineup with Reed Prinsep. Centre Wes Goosen has also been bracketed on the bench with Jonah Lowe.

Goosen’s situation has triggered a backline reshuffle with fullback Jordie Barret moving into the No 13 jersey, winger Nehe Milner-Skudder reverting to No 15 and Julian Savea slotting back into the starting lineup.

Gareth Evans has been promoted to start ahead of openside flanker Sam Henwood while All Blacks forward Vaea Fifita is fit again and has been named on the bench.

Prop Jeff Toomaga-Allen has been named to play his 100th Super Rugby match.

- The Canes have won 21 of their last 22 games played on home turf, including their last nine on the bounce

The Crusaders will host the Sharks in Christchurch which will be the first time the sides have met since 2016 with the Crusaders claiming a 14-19 victory in Durban on the day.

The defending champions have won 17 of the previous 23 encounters between the two sides but the Sharks have caused a few upsets notably in 2014 when the Sharks beat the Crusaders 25-30 in Christchurch despite playing the majority of the match with 14 men.

Crusaders coach Scott Robertson has made 5 changes to his starting lineup with Kieran Read and centre Ryan Crotty both declared fit.

- The Crusaders have won each of their previous meetings in the playoffs.

- No South African team has ever won a finals game in New Zealand, with this being the 13th such fixture in Super Rugby history

- While in charge of the Crusaders, Scott Robertson is yet to lose at home to a side from outside New Zealand. The Waratahs will be looking to secure the double over the Highlanders this weekend after they ended Australia's drought against New Zealand sides earlier this season.

Historically the Waratahs have the edge in this fixture winning 8 of their 12 games against the Highlanders in Sydney.

Waratahs coach Daryl Gibson has made just one change to his starting side with Alex Newsome being rewarded for his fine form by replacing Cam Clark on the right wing.

Siate Tokolahi, Richard Buckman and Alex Ainley are all unavailable for the clash.

- The Tahs have won four of their last 5 finals games at home, however, their only defeat in that span came in 2015 against the Highlanders.

- Tevita Li has crossed for a try in each of his last two games against Australian opposition, and has scored three tries in his last four games overall

- Highlanders Luke Whitelock, Tom Franklin and Dillon Hunt have all made at least 10 tackles more than any other player in the competition and all average over 11 tackles a game.

The Lions and Jaguares face off in a clash which has historically been won by the home side. The Lions will be vying for their third straight Super Rugby final and will be hope it will be third time lucky.

The Jaguares, on the other hand, have enoyed their best season in the competition and went seven games unbeaten before falling to the Bulls a weeks ago. The Argentines will be making their first appearance in the Super Rugby playoffs.

The Lions have made two changes to their starting lineup with Aphiwe Dyantyi replacing Courtnall Skosan in the starting XV while Ross Cronje coming in for the injure Nic Groom who has played his final game of the season.

On the bench Dylan Smith returns after recovering from a calf strain, while Dillon Smit takes the vacant 21 jersey.

Mario Ledesma has made a number of changes to his side to face the Lions with only Pablo Matera and Marco Kremer the only forwards remaining in the starting XV.

Ledesma has made 5 changes to the starting backline with Matias Moroni and Bautista Delguy with former moving from fullback onto the left wing.

Matera successfully appealed his two week ban to start the match while Agustin Creevy, Nicholas Sanchez and Emiliano Boffelli are among the other players returning to the side.

- Each of the last six games between the Lions and Jaguares has been won by the home team on the day, with each side winning three games apiece

- The Lions have won four of their previous five finals games on home turf, scoring 40+ points on three occasions in that time

- The Jaguares have lost their last eight games in succession in South Africa.

- The Lions (27) and Jaguares (26) have beaten more defenders per game than any other team this campaign.