Super Rugby Round 6: Team of the Week

After another fantastic round of Super Rugby, we had a few tough calls to make for our Team of the Week. Notably at outside centre, flyhalf, wing and no.8.

Here is out round 6 Team of the Week:

A victory in his 100th Super Rugby was not to be for the Reds captain but Slipper put in a tidy shift regardless.

He put in a solid scrummaging performance against one of the most promising tightheads in the competition, Wilco Louw, and made 9 tackles and 6 carries.

The hard-hitting 29-year-old was exceptional against the Sharks. His scrum work was brilliant against the side from Durban.

He also dotted down at the back of a strong driving maul and kept 100% at lineout time.

The Los Pumas loosehead was outstanding against the Lions, he made 16 without missing a single one, added a turnover and 4 carries to cap off a fantastic game.

De Jager continued his fine start to the 2018 season with another busy game against a powerful Crusaders pack. His lineout work was world class and made 11 carries and 8 tackles.

Ardron was exceptional in his first Super Rugby start. He got on the scoreboard 4 minutes into the match and went on to rack up impressive numbers.

He made 124 running metres from 5 carries, beating 2 defenders and made 2 clean breaks.

Canadian International Tyler Ardron was one of the stand out performers for the Chiefs today #SUNvCHI #UltimateStats pic.twitter.com/FWuHS6wdv5

Matera lead his side to yet another victory over the Lions in Buenos Aires this weekend.

The busy flanker made 13 carries for 77 running metres, beating 4 defenders and assisted a try.

Defensively he was brilliant making 16 tackles and 3 turnovers.

Cotrell had another fine match as the Rebels claimed a record victory over the Sharks.

The big flanker made 7 carries, made 11 tackles, 2 clean turnovers and was a consent threat at the breakdown.

Desio is the third Jaguares forward to make our team of the week and rightfully so.

The big no.8 made 5 tackles but it was his work on attack that earns him a spot in the side.

He made 81 running metres, beat 3 defenders and ran great lines for his 3 clean breaks and scored 2 tries.

Another centurion makes our team of the week following an impressive outing against the then-unbeaten Highlanders.

Perenara got the better of his All Black counterpart on the night with a brilliant kicking and attacking game.

He assisted one of the Hurricanes tries and didn't throw a single bad pass the whole game.

McKenzie scored 2 tries and assisted another 2, beat 4 defenders and racked up 74 running metres.

Aso's important comeo off the bench for the Hurricanes sees him edge out plenty of performers this weekend.

His brilliant finish in the corner saw claim the try of the week. Aso's substitution coincided with a 14 point swing in the Hurricanes favour as they claimed a 22-12 win over the Highlanders.

The Jaguares centre was destructive against the Lions as his side claimed a 49-35 victory over last year's finalists.

Ezcurra scored a try and assisted another, he was also brilliant on defence making 13 tackles and one turnover. 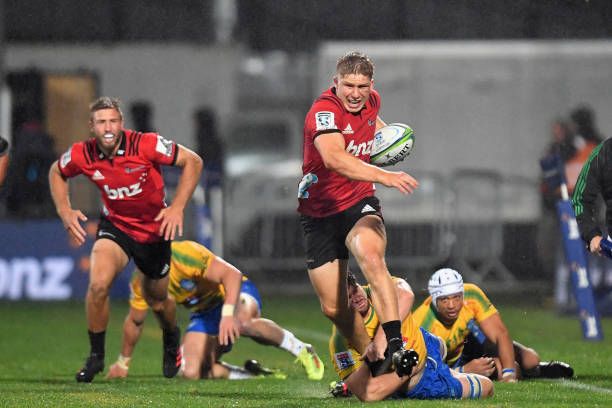 The Crusaders centre edges EW Viljoen in our team of the week. The two centres played very different games but were both brilliant for their respective sides.

Goodhue had to deal with the cold and wet Canterbury weather, while Viljoen enjoyed the dry, sunny Cape Town conditions.

Both players ran superb lines with Goodhue powering through Bulls forwards for his two tries. He also made 10 tackles and one turnover.

Daugunu burned Springbok winger Raymond Rhule on his way to a 100 metre try in the latter stages of the match to give his side the opportunity to steal the victory in the final play of the match.

It was not to be for the Queensland side but Daugunu played a major part throughout the game for the Reds.

He made 134 running metres, beat 6 defenders and made two clean breaks.

A Barrett gets the better of a McKenzie this time round with Jordie playing a superb match against the Highlanders.

He went up against All Black Ben Smith and he didn't disappoint.

He was brilliant under some testing kicks, converted a superb long range penalty and picked up a try assist.

He also made 2 clean breaks, beat 2 defenders and made 46 running metres.