Super Rugby Team of the Quarter-Finals

The Crusaders, Jaguares, Hurricanes and Brumbies all claimed semi-finals with wins over the Highlanders, Chiefs, Bulls and Sharks respectively.

The results mean the Crusaders and Hurricanes with the clash in Christchurch while the Brumbies travel to Argentina to face the Jaguares.

Here are our team of the quarter-finals:

The Crusaders fielded an all-All Black front row against the Highlanders and the likes of Moody, Taylor and Franks did not disappoint. Moody got the better of Lomax in the scrums, carried the ball strongly and was superb on defence and was one of the top tacklers in the first 40 minutes.

As mentioned before the Crusaders tight-five were sublime in their win over the Highlanders. They dominated up front with Taylor also solid in all facets of the game. Agustin Creevy was also excellent for the Jaguares as too was Dane Coles for the Hurricanes.

Alaalatoa beats Owen Franks to the three jersey after a massive shift against the Sharks as he topped the tackle count with 19 and put in a strong scrumming performance against Majola.

Arnold was absolutely brilliant for the Brumbies assisting two tries, made 12 tackles and made 7 carries.

Another strong game from the Jaguares lock who fronted up against Chiefs to guide his side to their first semi-final in the competition. Petti just edges Sam Whitelock who was excellent against Highlanders.

This is what a quarterfinal win means to the Jaguares.#JAGvCHI pic.twitter.com/hf0cwL9SrP


Captain fantastic for the Jaguares making an incredible 17 carries and 15 tackles while also scoring a crucial try to help his side to victory.

He made over 58 running metres beating 6 defenders and he came up with a try assist. Matera certainly stepped up for the Jaguares was our player of weekend.

A close call between all of the All Black openside flankers this weekend with Sam Cane just edging Ardie Savea and Matt Todd. Savea was outstanding on attack, Todd at the breakdown but Cane gets the nod with a big defensive effort and at the breakdown.

He made 20 tackles, 10 carries and won two turnovers. 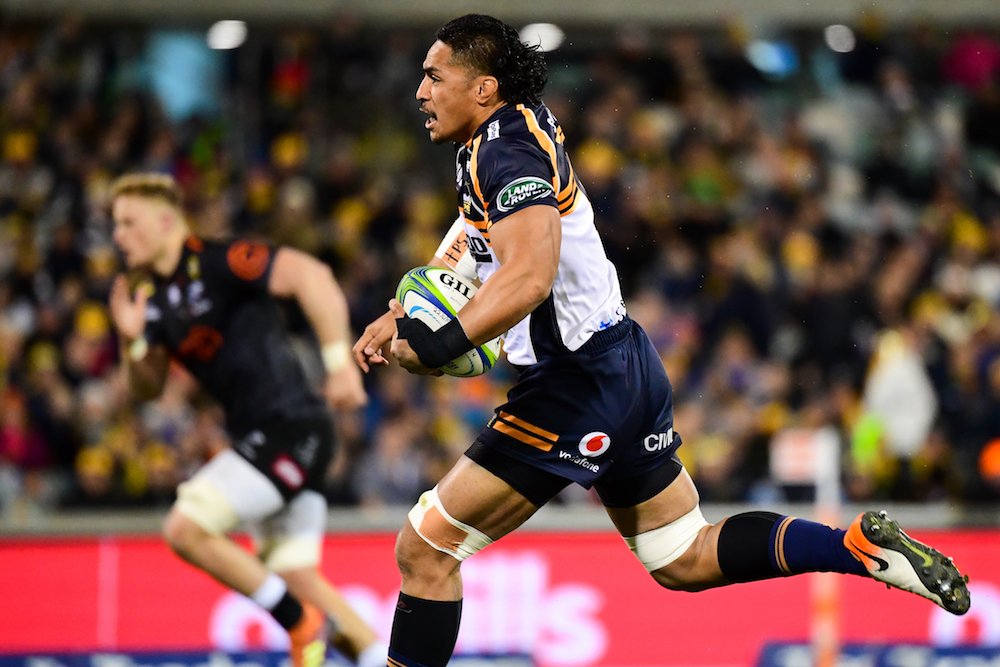 Samu put in a massive 40-minute performance scoring a brace to set his side on course to beat the Sharks 38-13. He made 74 running metres from 5 carries beating 6 defenders and making 3 clean breaks.

Samu was put through a gap by Rory Arnold in the opening minute of the game and went over from the back of the maul for his second but was unable to return in the second half with a hamstring injury.

👌🏽 TJ on the spot! We are back underway in the second half with the Hurricanes leading the Bulls 24-14. Tune into @SkySportNZ to find out who is heading to the semifinals!#HURvBUL pic.twitter.com/EkeUkMe7Hs


An outstanding game from the All Black halfback who made over 100 running metres scoring a try and assisting another.

Perenara guided his side to victory over the Bulls, he made all of his tackles and forced a turnover.

Joe Powell was also brilliant for the Brumbies and Brad Weber for the Chiefs but in the end Perenara was some way ahead of the contenders.

Brad Weber has done all he can to get a test recall https://t.co/kx0FMopQ3Q

A masterful performance by the Crusaders' first-five who equalled Dan Carter's record for the most points scored in a playoff match by a Crusader.


He scored a brace and took the Highlanders apart in the second half to guide his side to another Super Rugby playoff.

Rayasi was excellent off the bench for the Hurricanes following Wes Goosen's injury. He is another player to score a brace and racked up over 80 running metres.

He did cost the Hurricanes a penalty try but was otherwise superb in a rare appearance for the Wellington-based franchise.

Matias Moroni just missed out to the Hurricane while Sevu Reece continued to impress.

De la Fuente was excellent in keeping Anton Lienert-Brown relatively quiet and linked up well with his fellow backs.

Ryan Crotty was superb, again for the Crusaders, while Irae Simone did well to put the Brumbies backs into space.

44 running metres and a strong performance on defence gets Goodhue the nod at outside centre.

Rob Thompson produced a stellar offload in the same game for the Highlanders to score while Lukhanyo Am was one of the better Sharks against the Brumbies.

Simply superb against the Hurricanes, Hendricks was outstanding in all facets of the game. He defended well, attacked well scoring a brace and made over 50 running metres.

This would be one of the best comeback stories in test rugby 🙌#SuperRugby #HURvBUL https://t.co/EbZF6EDDx8

Alaimalo made more running metres than any other player this weekend racking up 107 metres and beat five defenders.

David Havili was closest to claiming a place over the Chiefs' fullback but Alaimalo claims the jersey.