It's all happening on Super Sunday as the final round of the Premiership kicks off with plenty still to play four in terms of the semi-finals and Champions Cup spots.

There is a possibility that two of the Super Sunday games will not take place with Worcester confirming their team with the following tweet: 'Callum Black will make his 100th appearance for the club if tomorrow's match goes ahead."

This follows confirmation that the Sale Sharks have had a number of positive COVID-19 tests in their camp.

Meanwhile, Gloucester and Northampton join Sale in being the three teams yet to confirm their line ups with the two matches now in doubt. There has been suggestions that the games could be moved to a midweek fixture.

UPDATE: Gloucester have since named their side to face Northampton.

The Exiles will run out onto Twickenham Stoop with their tails up after victory against Exeter on Wednesday evening, however, they face the unenviable task of contending with a Bristol outfit brimming with determination. Although it was, admittedly, against a somewhat diluted Exeter outfit, Irish were not unimpressive in their successful pursuit of victory; their forwards, especially, pulling out all the stops and fronting up courageously to the Chiefs on the latter’s home turf.

Bristol, meanwhile, were merciless and determined in their fixture against Leicester on Wednesday, rucking, mauling, tackling and running the men from Welford Road out of the game completely. Any notion that Bears might be taking this game lightly is quickly dispelled with a glance at the overall standings. Pat Lam’s charges currently hold fifth spot on the log – level on points with fourth-placed Sale – and a five-point haul would do wonders for their chances of appearing in the play-offs, if any one of Wasps, Bath or Sale slip up.

Bears last faced Irish way back in Round 5 in a riveting game which produced neither winner nor loser. Bristol would do well to bear in mind that, in said 27-all draw, Irish were forced to play over forty minutes with fourteen men. If the Exiles draw on that same spirit, a cracker is on the cards for Sunday. 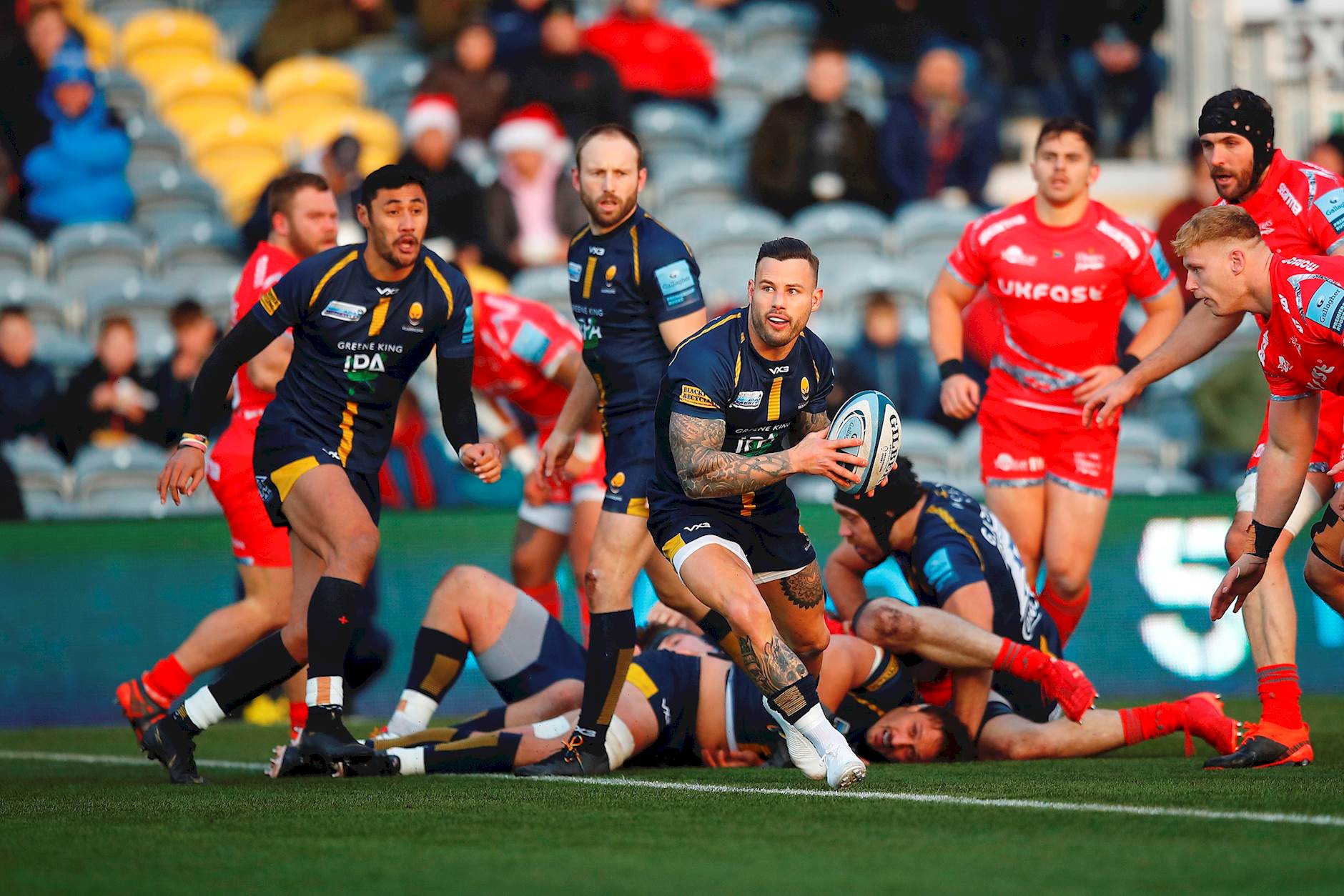 Pressure, pressure, pressure; the team which is able to handle it best stands a good chance in this match-up. Worcester travel to the AJ Bell on Sunday with a dream and a hope of doing enough to be counted among Europe’s finest next season. Their goal: collect five points which may put them ahead of the Cherry & Whites and thus finish in the top 8 to qualify for the Champions Cup. Warriors put together an admirable performance in the last round, downing Saracens 40-27 at Sixways, but do they have it in them to ride the blue wave of the Sale Sharks?

Sale will leave nothing to chance in this outing as they doggedly look to defend their current semi-finalist status. Their intentions were easily detected in their 34-14 victory over Northampton Saints on Wednesday evening, Sale earning dominance from the get-go.While Warriors will look to the Round 5 result with optimism, Sale will regard it with caution – an indication that the men from Worcester have the capability to turn them inside out. A gritty contest ended in Warriors’ favour (20-13), though it should be noted that Sale were forced to see out more than half the game with 14 men. 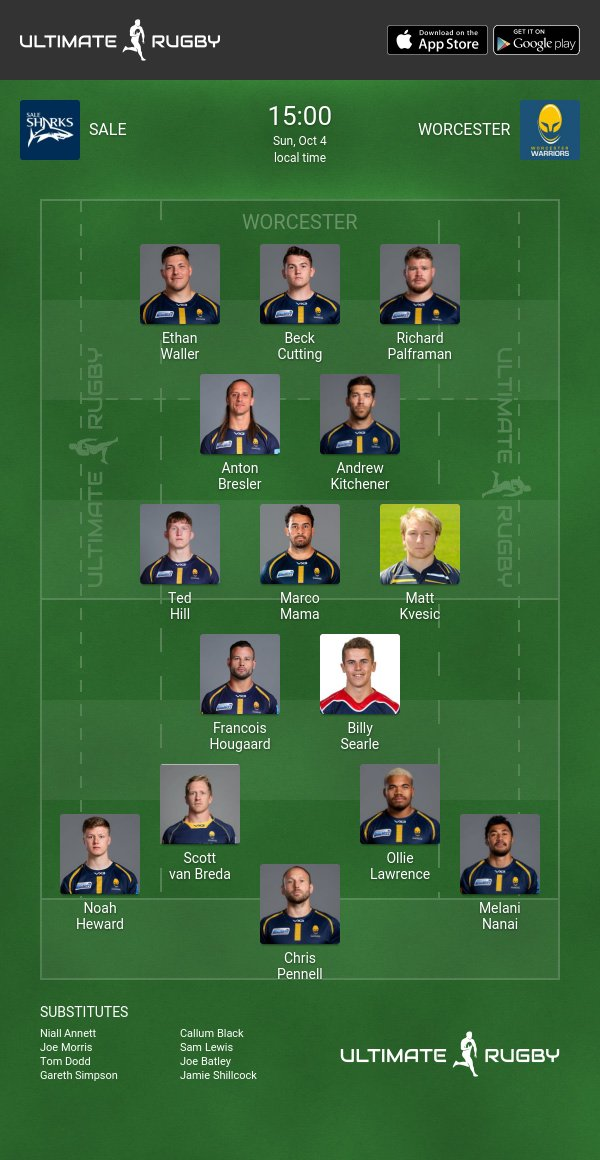 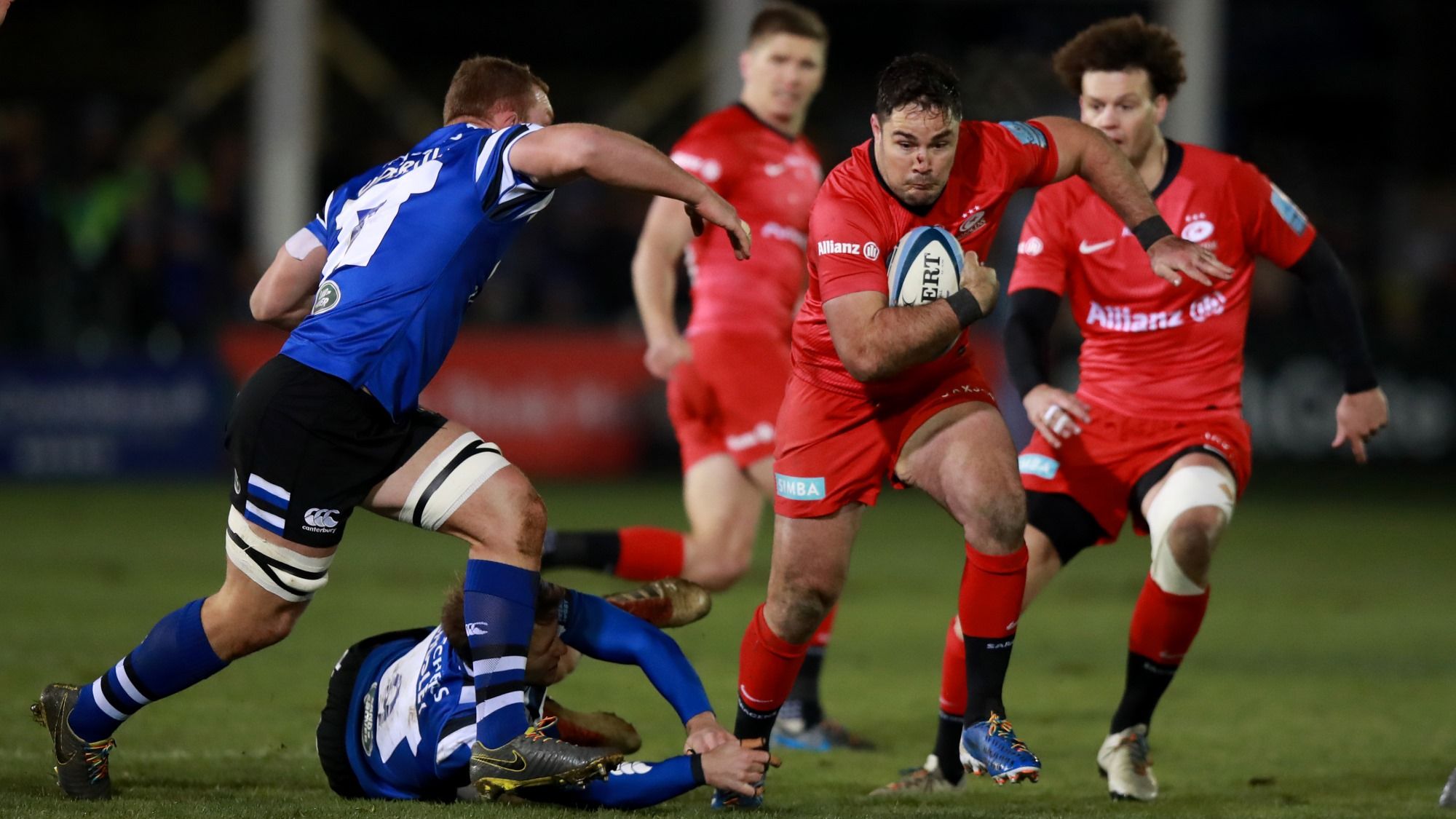 Twelfth-placed Saracens host third-placed Bath at Allianz Stadium in the penultimate game of Round 22. Sarries can expect a furious onslaught from Charlie Ewels’ men as they fight for a five-point victory which could see them edge Wasps out of second position, thus securing a home semi-final.

The competition for the top four spots is fierce, with only two points separating second-placed Wasps from fifth-placed Bristol. Bath find themselves one point ahead of Sale and only a point behind Wasps, thus, victory is vital. Saracens, on the other hand, facing relegation, do not have much at stake, save for pride.

Round 21 saw Bath execute a dramatic comeback against arch-rivals Gloucester at The Rec; with only twenty minutes left on the clock, Bath found themselves 17 points adrift after repeated brilliance by Gloucester. Through sheer determination (from which they will derive much encouragement come Sunday) Bath snatched victory from the jaws of defeat, running in an astonishing four unanswered tries in the final quarter. Saracens slumped to a 40-27 defeat to Worcester Warriors at Sixways in the last round, and looked somewhat more lethargic than they usually do.

Sarries came out on top on the last occasion the teams clashed, 25-12, though it is difficult to tell whether that result will have any bearing on this one, as Mark McCall’s charges had considerably more to play for back then. However, when all is said and done, technicalities may be thrown onto the backburner as two old foes share turf once more and a good contest will hopefully ensue.

Richard Wigglesworth will make his 250th and final appearance for Saracens in this clash. 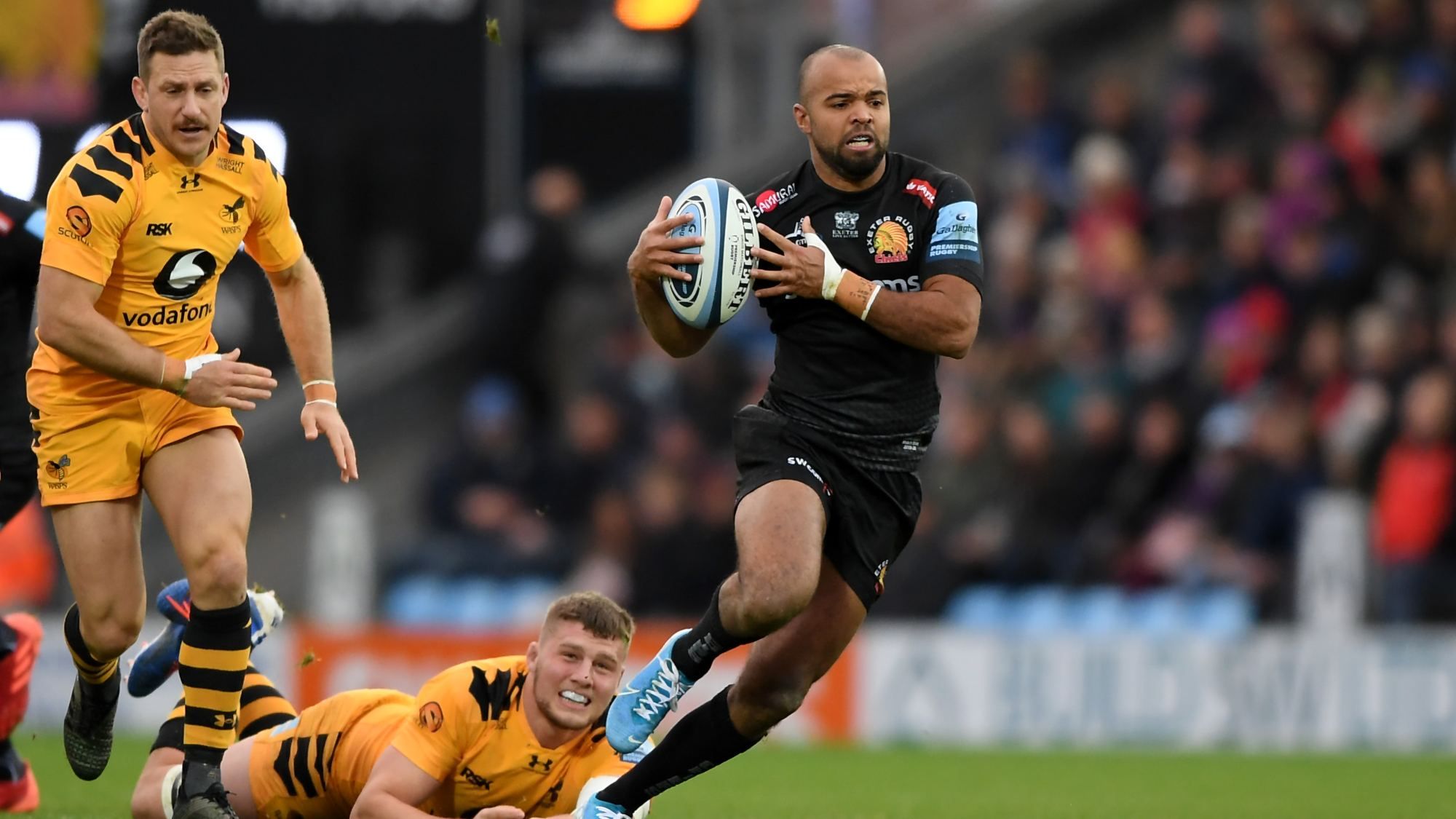 While Exeter have earned the right not to be overly concerned with their final round clash with Wasps, the latter will be fighting tooth and nail to take home five-points to secure for themselves a home semi-final next weekend. Things on the overall standings are so tenuous at present that Wasps could actually find themselves in fifth position should they come unstuck against Exeter.

As Exeter are guaranteed a spot in the play-offs (as well as the Champions Cup final in just over a fortnight), rest-assured they will be resting a significant portion of their first-choice players for this one – a fact that Wasps will gladly revel in. Exeter succumbed to a three-point defeat against London-Irish in the last round while Wasps put Harlequins away in quite convincing style, 32-23.

The notion that Wasps may have an easy time of it against a second-string Exeter outfit should be tempered by the fact that there will be youngsters eager to perform at their best so as to create the best chance they can have to be involved in the play-off stages. In short; while it may be a weakened Exeter outfit, it is a team packed with individuals harbouring a common point to prove.

The scoreline in the Round 5 clash between these two was by no means flattering to Wasps, who were buried 38-3 by a rampant Exeter side in the infancy of a brilliant campaign. While there is significantly more to play for in the Wasps camp, expect still a great contest between two quality sides. Among ten changes to the team that ran out against Wasps on Monday, loosehead prop Jordan Els earns his first start for the Club having made his debut from the bench against Wasps, with centre Joe Marchant shifting to the wing as Scottish international James Lang takes up the thirteen jersey alongside Andre Esterhuizen in the midfield. Danny Care and Brett Herron form a changed halfback partnership, with last weekend’s halfbacks Scott Steele and Marcus Smith side-lined through injury.

Amongst the Game Changers, Academy product Louis Lynagh will look to make his Gallagher Premiership debut from the 23 jersey. Also representing the Harlequins Academy, George Head starts at hooker following injury to Wales international Scott Baldwin, with another Academy front row in Jack Musk added to the match day squad in the 16 jersey.

Borthwick has made 15 changes to the side that travelled to Bristol midweek, including 13 changes to the starting team. He has also included Kobus Van Wyk, who will make his Leicester debut on the wing. Ellis Genge, Tom Youngs and Dan Cole are the front-rowers, with Harry Wells shifting into the second row alongside Calum Green in the absence of the injured Tomás Lavanini. In the back row, Luke Wallace is the only forward who started at Bristol and is included at blindside flanker with Tommy Reffell at openside and Hanro Liebenberg at No8.

Ben Youngs and George Ford are the half-backs, with Matt Scott in the midfield alongside fellow international Kini Murimurivalu. Fiji international Nemani Nadolo joins Van Wyk as the wings, with Tigers youngster Freddie Steward at full-back.

On the bench, Charlie Clare joins Ryan Bower, Nephi Leatigaga, Blake Enever and Thom Smith who all featured in midweek. Jack Van Poortvliet and Zack Henry, who also played in Round 21, are joined by South Africa international Jaco Taute as backs cover. 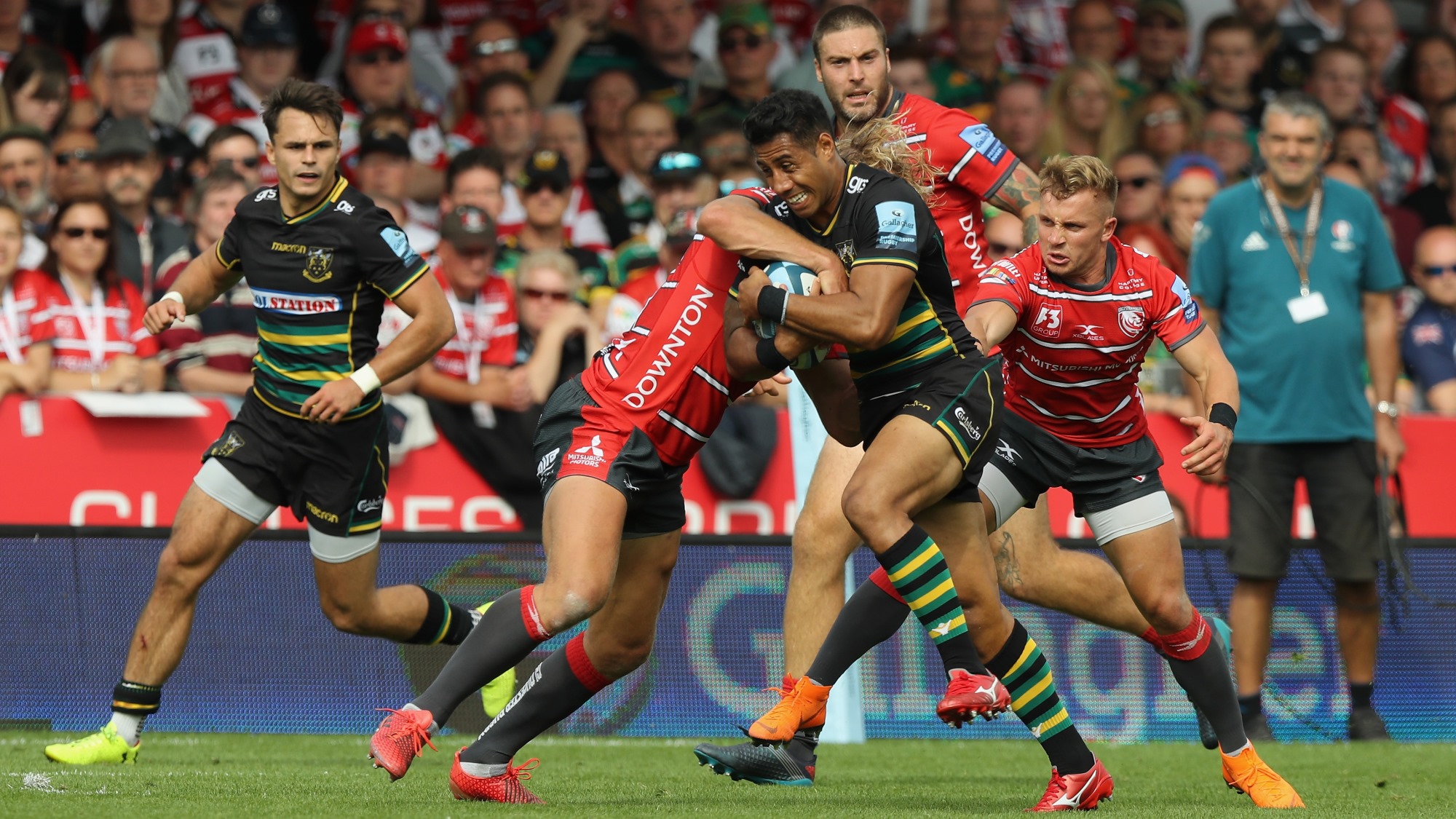 The Saints go marching into Kingsholm to tackle the Cherry & Whites. It will be the final game of the current tournament for these two as neither one will take part in the play-offs. However, there is still much to play for in light of the 2020-21 instalment of the Champions Cup – with the top eight teams from the Premiership heading through – lending this contest a fair bit of bite.

There is really not much in it between these two foes; each having played 21 games to date with Saints winning 8 and Gloucester 7. When they last encountered one another, in Round 7, it was Saints who came away with the spoils – 33-26. Hopefully, the standard of this next game will be of a similar one that the last one took on as the combination of Saints and Gloucester produced a fine display of rugby at Franklin’s Gardens.

As things stand, both sides qualify for next season’s Champions Cup, although Gloucester are threatened by Worcester Warriors who, if they manage to pull off a bonus-point win over Sale Sharks and Gloucester succumb to defeat, will leapfrog the Cherry & Whites to do battle with Europe’s finest. With this in mind, expect Gloucester to leave the pitch with nothing left in the tank. 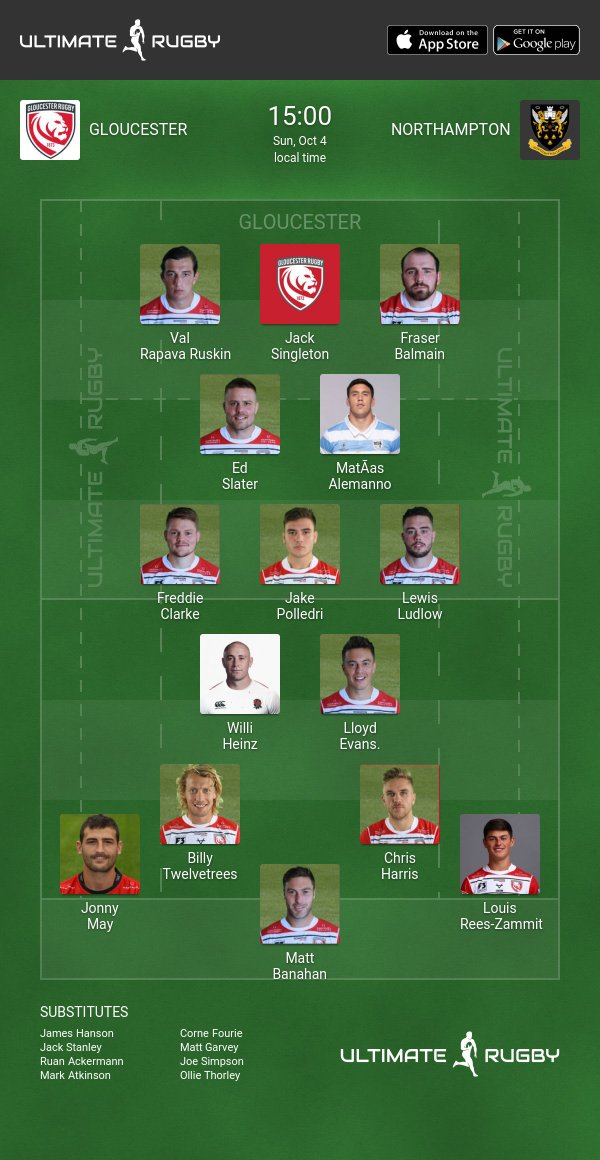