The national team will face Wales in Cardiff on Saturday 3 November and contest the ‘Doddie Weir Cup’, as both teams honour the former Scotland and British & Irish Lions player diagnosed with Motor Neurone Disease.

Scotland will then return home to Murrayfield for three home Tests against Fiji, South Africa and Argentina on the consecutive Saturdays that follow (10, 17 and 24 November), all of which are on target for capacity crowds, with South Africa sold out and Fiji and Argentina close behind.

Scotland Head Coach, Gregor Townsend, said: “We now begin the last 12 months of our preparations for Rugby World Cup 2019 with four Test matches in four weeks, a similar challenge to the one we’ll face in Japan.

“We’ve named a 40-man group for this campaign, which highlights the quality of player that is now available to us and the competition for places.

“It also enables us to welcome more players into our training environment and hopefully give a few more players a taste of Test match rugby.

“It’s going to be an exciting year for the squad but our primary focus is fixed on performing well against Wales – familiar opponents who have already recorded a win against us this year.”

Thomson and Skinner are eligible for the national team through family connections, Thomson through his paternal grandfather, Robert, from Wishaw, while Skinner’s father, Peter, is from Ayr.

Skinner (23) was first involved in the then Scottish Exiles (now Scottish Qualified) programme as a teenager, while at Taunton Titans, before he joined the Chiefs in the 2014/15 season.

Thomson (27) arrived in west Wales from Super Rugby side Hurricanes, having represented New Zealand U20 and the Maori All Blacks, and has been a stand-out performer for the Llanelli side in his debut Guinness PRO14 season.

Johnson (25) is eligible for Scotland on residency grounds, having joined Glasgow Warriors in the summer of 2015.

The Australian-born centre has been a popular figure at the Scotstoun club, making 40 appearances since his arrival and voted last year’s Players’ Player of the Season by his peers.

The squad also welcomes the return of several seasoned campaigners who missed the summer tour either through injury or a summer of scheduled rest, which sees the likes of Alex Dunbar, Jonny Gray, Huw Jones, Greig Laidlaw, Sean Maitland, Willem Nel, Gordon Reid, Finn Russell, Tommy Seymour, Ryan Wilson and Hamish Watson all back in the squad.

The selection also marks the return of centre Matt Scott and scrum-half Henry Pyrgos, who last featured in a Scotland shirt in the side’s 2017 wins over Australia in Sydney in June and Edinburgh last November, respectively. 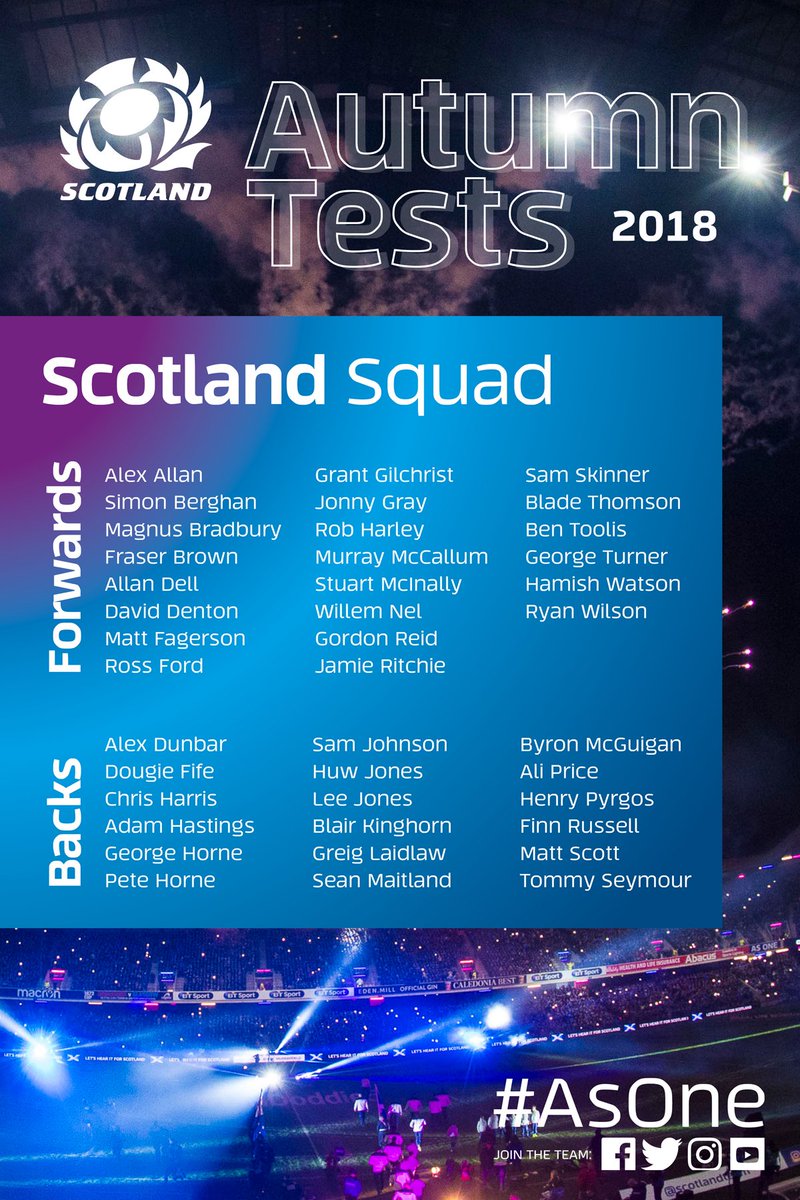