Round 24 wraps up with Toulouse and La Rochelle casting an eye on next weeks Champions Cup Final and Montpellier focussing ahead to the Challenge Cup Final.

Elton Jantjies scored 19 points as he guided Pau to what looked like an unlikely win against the blockbuster side of Racing 92. It wasn't to be with Donovan Taofifenua scoring the winning try 5 minutes from time. Gael Fickou and Virimi Vakatawa ran riot in the midfield as Pau managed to only complete 55% of their tackles and conceded 4 tries, scoring 2 of their own. Pau are currently 2nd from bottom on the Top 14 table. Full Time 29-35

A back and forth kicking duel at the Stade Chaban-Delmas as Bordeaux claim an important 20-16 victory over Castres which sees them move ahead of their opponents on the TOP14 log.

Matthieu Jalibert slotted two early penalties to get the score rolling for Bordeaux before misses from both Rory Kockett and Jalibert saw the score remain 6-0 before 20 minutes were up. Just before the end of the first quarter, Jalibert made it 9-0. Ben Urdapilleta got Castres on the board in the 22nd minute before Combezou set up and scored the first try of the game linking up brilliantly in a flowing counter attack that saw Nakosi sprinting down the touchline and Rory Kockett providing the final pass to the centre to score. Pablo Uberti responded for Bordeaux after gathering a loose pass by Jalibert to stroll in and put Bordeaux up 14-10 at halftime.
All the scores in the second half came via the tee with Urdapilleta and Jalibert knocking over two. Castres had a chance to steal the game at the end but young French International Alexandre Roumat spoiled their chances with a stolen lineout inside his own 22 with Guido Petti doing similar not too long before. Full Time 20-16.

La Rochelle got off to a dominating start from the kick off. Lavault opened the scoring and minutes later West went over to score. La Rochelle did not allow Agen to be offensive as they continued their dominance. Doumayrou and Bougarit scored the remaining tries of the dominating first half. Rhule came on in the second half and immediately made the difference. H scored two tries as well as Alldritt. La Rochelle was awarded a penalty try as Agen conceded multiple infringements. Bellot was sent to the bin. Full Time 59-0

Brive started the game on the backfoot. Delarue and Brennan were sent to the sin bin minutes apart from each other. Ivaldi opened the scoring for Lyon, thereafter Rodda went over to extend the lead. Thomas was sent to the bin in the 39th minute. Berdeu ended the half with a penalty kick. Berdeu opened the scoring in the second half. Abadie was sent to the bin for disputing a decision. Chauvac scored the only points of the day for Brive. Full Time 24-7

A bonus point victory for Stade Francais as Montpellier pay the price for a tough schedule and a red card for prop Gregory Fichten. Joris Segonds and Louis Foursans traded penalties before Antoine Guillamon went to the sin bin. Sefanaia Naivalu scored before the half hour mark. Alex Bevia was sent to the sin bin soon after with Fitchen being sent off for punching Nicolas Sanchez. James Hall extended Stade Francais' lead finishing off a flowing attack as the hosts lead 13-3 at half time. Romain Macurdy scored an intercept try for Montpellier against the run of play before Telusa Veainu scored out wide, assisted by Naivalu. After the hour mark, Alex Arrate dotted down for the hosts with Tala Gray rounding off the victory with a try at the back of a rolling maul. Full Time 32-10

Bayonne toppled top of the table, Toulouse, in the Top 14 with the Champions Cup finalist resting a number of their stars. Bayonne moved from second from bottom in the TOP14 with flyhalf Maxime Lafage starring in the victory. The flyhalf set up a try with a deft cross-kick and slotted all of his shots at goal racking up 19 points before being forced off the pitch through injury.

Toulouse looked to claim a come from behind victory as Dimitri Delibes scored in the 78th minute but by that time the damage had been done. Toulouse shot into the lead through tries by Iosefa Tekori and Thomas Ramos but Bayonne hit back with a penalty and tries from Aymeric Luc and Remy Baget to lead 14-17. Selevasio Tolofua scored before the break to lead 21-17. Lafage slotted four penalties in the second half to give Bayonne a 21-29 lead.

Props Paul Mallez and Vincent Pelo both when to the sin bin as the two props couldn't set the scrum. Manual Ordas mad it an 11 point game before Delibes scored what proved to be a consolation try. Full Time 28-32

An exciting encounter started off with a yellow card to Toeava for obstruction. Parra opened the scoring with a penalty kick. Villiere scored a brilliant try. Parra continued his fine kicking form with his penalties. Vahaamahina got sent to the sin bin before half time. Carbonel ended the first half with a penalty kick. The second half started with both sides exchanging penalty kicks. Naqalevu scored the vital try that sealed the victory. Full Time 25-16 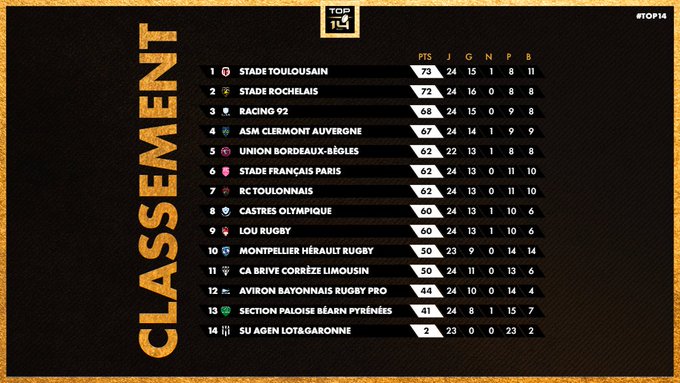