The semi-finals of the Japanese Top League kick off this weekend with Toyota Verblitz taking on the Panasonic Wild Knights on Saturday and Suntory Sungoliath facing Kubota Spears on Sunday.

Director of Rugby at Toyota Verblitz and former All Black coach Steve Hansen has guided his side into the semi-finals of the competition winning six of their seven round-robin games, losing to fellow semi-finalists Suntory who they may meet in the final. Verblitz beat Hino Red Dolphins and NTT Docomo Red Hurricanes to reach the final four.

Meanwhile, former Crusaders and Wallabies head coach Robbie Deans is yet to see his Panasonic Wild Knights lose a game this season winning six of their seven round-robin fixtures with a draw also coming against a fellow semi-finalist in Kubota Spears. The Wild Knights beat Kintetsu Liners and Canon Eagles to reach the final four.

Suntory Sungoliath romped through the regular season fixtures winning all seven games, just once without a bonus point, finishing with a points difference of +291. They smashed NEC Green Rockets 76-31 in their playoff game before their quarter-final was called off due to COVID, which resulted in them going through to face Kubota Spears.

Another former Super Rugby winning coach is in charge of the final semi-finalist, Kubota Spears, with former Bulls boss Frans Ludeke in charge of the side that won five of their seven league matches. Ludeke's side claimed the upset of the quarter-finals beating the champions from 2019, Kobe Kobelco Steelers 23-21.

We take a look at the two semi-finals as the sides battle it out to see who will feature in the final on May 23 which will be the last hurrah for the Top League, which will be replaced by a new three-tier league starting in January 2022.

A number of former and current internationals will feature in the first semi-finals with All Black and Wallaby captains Kieran Read and Michael Hooper in the matchday 23 for Toyota. World Cup winner Willie Le Roux is at fullback for Steve Hansen's side while Robbie Deans has started Japanese International Keita Inagaki in the front row, former Lions lock George Kruis in the second row and former Wales centre Hadleigh Parkes at inside centre.

Both sides have more than competent packs to launch off of in the semi-final which may prove pivotal for Panasonic if they are to claim a place in the final considering the threat that Verblitz pose in the backs. Winger Jamie Henry has scored nine tries from nine matches in the season so far with the South African dual playmaking duo of Lionel Cronje and Willie Le Roux pulling the strings. Flyhalf Cronje has assisted 8 tries this season for Verblitz, the highest tally in the competition, while Le Roux has assisted 7 - the joint second-highest tally.

Verblitz's win over the Red Hurricanes

Panasonic is not short on attacking weapons in the backline either with Kenki Fukuoka scoring a joint season-high of 10 tries in 9 games with Hadleigh Parks scoring six and assisting six of his own. Robbie Deans' side are arguably the most well rounded of the four semi-finalists averaging the least amount of points conceded (11.1) and second-most points scored (44.9) per game this season. However, Verblitz will be confident following their narrow victory over Red Hurricanes last week. 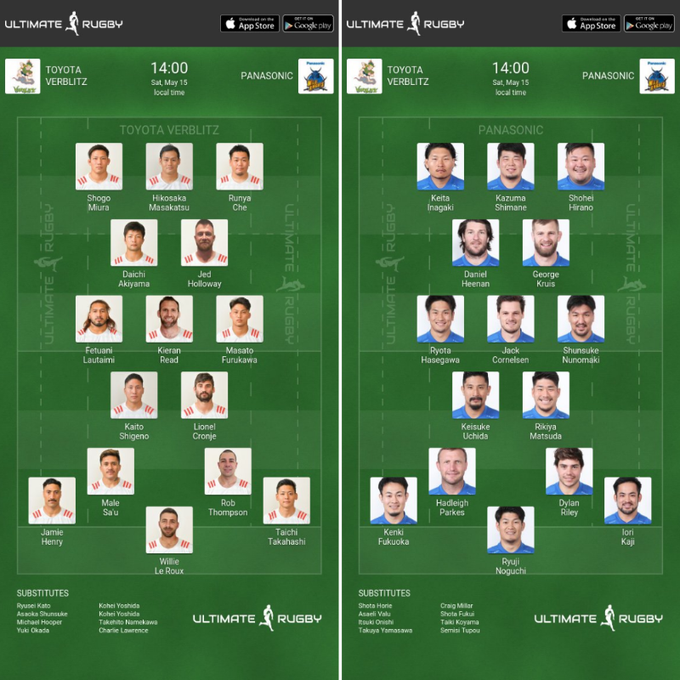 Two All Blacks will clash in the second semi-final with Beauden Barrett's Suntory facing off against Ryan Crotty's Kubota Spears. Suntory rampaged through the season scoring a ridiculous 72 tries, beating the next best of 54 of Panasonic Wild Knights and Kobe Steelers, despite playing a game less than the two.

Part of their success has been Beauden Barrett marshalling their attack at first five with the All Blacks scoring 141 points in eight games scoring seven tries and assisting a further six. However, Sungoliath does have the pack to match their impressive backline which also features Japanese International scrumhalf Yutaka Nagare and Wallaby Samu Kerevi (who is on the bench for the semi-final), with the likes of Tom Savage, Harry Hockings, Hendrik Tui and Sean McMahon. Suntory have the second-best lineout percentage (90.4%) and have won lost just three of their 33 scrums.

Suntory face off against a well-oiled machine in the Kubota Spears' back with Malcolm Marx spearheading the pack at tighthead. Unsurprisingly, former Bulls coach Frans Ludeke has put particular emphasis on the Spears power up front with Kubota boasting the best lineout success of 92.2% in the competition and have won 92.1% of their scrums.

Kubota are a tough nut to crack, highlighted by their quarter-final victory against one of the tournament favourite's Kobe Steelers. They managed to edge Kobe 23-21 despite playing 60 minutes of the game with 14-men with Bernard Foley being sent off and ultimately missing the semi-final. There is a very South African feel to the Kubota pack with Japanese International Lappies Labuschange on the openside and Ruan Botha and David Bulbring in the second row. Recent call up to the Japan squad to face the British and Irish Lions, Gerhard van den Heever has been accurate with the boot for the Spears and slotted the winner in the quarter-finals.

Suntory are certainly the favourites to win this one but don't write off the Spears just yet. 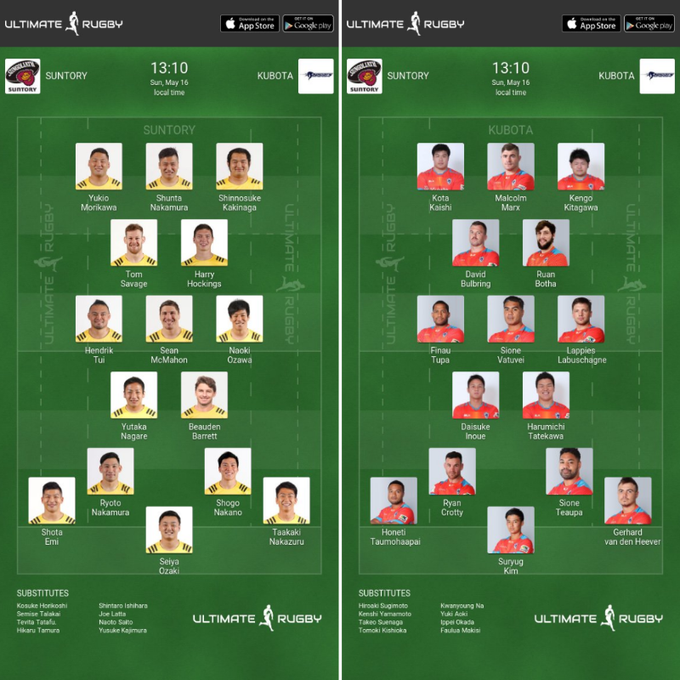