Front rower Trevor Nyakane will play in his 100th Super Rugby match on Saturday when the Bulls take on the Stormers at Newlands in Cape Town in a match that will also see the return to action of Duane Vermeulen.


Nyakane, who played 42 times for the Cheetahs before moving to Pretoria and Vermeulen, who was rested against the Reds two weeks ago, will be the only centurions in the team to take on the home side at Newlands. Nyakane will be the fifth South African prop to become a Super Rugby centurion.


Midfielder Burger Odendaal will also achieve a milestone and will be running out for his 50th game for the Bulls.

Bulls Head Coach, Pote Human, welcomed back Vermeulen after his rest protocols and he slots back into the number 8 jersey, with Paul Schoeman, who started against the Reds, dropping to the bench in place of Roelof Smit. The only other change is on the bench as well, where Johan Grobbelaar replaces Corniel Els as back-up hooker.

Human said he hopes the squad can retain some consistency, following a bye weekend.

"The last time we had a bye, the result was not a good one, so we are pretty mindful of that. I don't think complacency will be a factor, at least the guys did not show any in training. It has to do with the fact that we are travelling down to Cape Town. A clash with the home side down there is always a massive one for us."

Human congratulated Nyakane on his achievement. "This shows his consistency. He plays at a high level week-in and week-out and this is well deserved," said Human.

For Handré Pollard, who again takes the captaincy, the trip is important for more than one reason.

"We have been up and down and need to show that we can keep the momentum from last time out. The Stormers are coming off a defeat at home, so will be very keen to bounce back. They outplayed us last time we went down there and the guys are keen to rectify that result. Most importantly though is to show the effort is worth the hard work we put in. We have been our worst enemies at times this season." 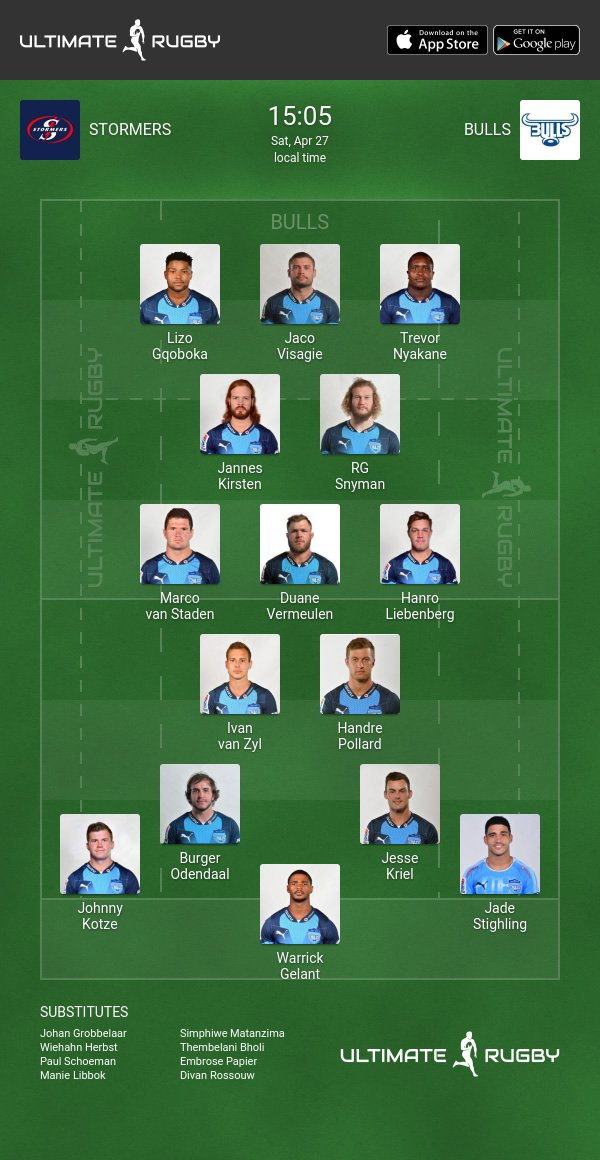