Tasi joined the Rebels in 2019 with Quade Cooper as an extended pre-season squad member, making appearances in their pre-season trials and in a mid-season game for a Melbourne XV against Japan A. 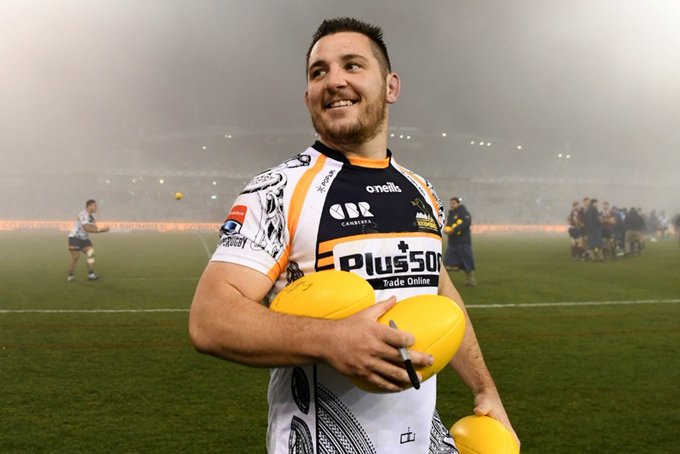 Connal McInerney has agreed to an early contract extension at Brumbies, keeping him at the club until the end of 2021.

The 24-year-old made his Super Rugby debut in 2018, coming into the squad as injury cover, before earning a full-time contract for the 2019 season. RC Toulon and Scarlets will do battle for a third time this season with the two sides set to meet in the European Rugby Challenge Cup quarter-finals.

Top seed Toulon have reached the last eight courtesy of a pool stage campaign that has yielded 28 points with wins over the Welsh region both home and away. Scarlets needed a 33-14 bonus-point win over London Irish in Round 6 to secure their spot in the quarter-finals.

Bristol Bears secured 26 points in topping Pool 4 and will host Dragons at Ashton Gate while fellow pool stage rivals Bordeaux-Bègles and Edinburgh Rugby meet for a third time, with the match being held at Stade Chaban-Delmas. Read more

Repeat of 2019 final as Leinster host Saracens in quarter-final Leinster Rugby and Saracens will do battle once again in a rematch of the 2019 Heineken Champions Cup final when they meet in this season’s quarter-finals.

No.1 seed Leinster racked up 28 points in Pool 1 to secure the top placing and will meet Saracens at the Aviva Stadium in Dublin after the defending champions narrowly defeated Racing 92 27-24 on Sunday afternoon to finish as one of the best three runners-up.

That defeat for Pool 4 winners Racing 92 means they will be on the road in the last eight as the No.5 seed facing fellow TOP 14 side and Pool 3 winners ASM Clermont Auvergne at the Stade Marcel-Michelin. Read more

Champions Cup Team of Round Six

The pool stages of the Champions Cup came to an end of the weekend with the eight teams now set to compete for the ultimate prize.

Jonny Gray's impressive game against Sale Sharks earns him a place in our Team of the Week. Following the confirmation that Saracens will be relegated at the end of the current season, three of their top players have been linked with a move to TOP14 side Lyon.

Lyon currently sit in second place on the Top 14 table, three points adrift from Bordeaux Begles, and featured in the Champions Cup for the first time this season.

The Rugby Paper has reported that the TOP 14 club could sign England and Saracens trio Owen Farrell, Maro Itoje and Billy Vunipola.

Pick us up in the morning to read all about the biggest story in English sport 📰 pic.twitter.com/6axKRVeoAv Eddie Jones may be without one of his star men during the 2020 Six Nations with Billy Vunipola picking up an injury in Saracens' clash with Racing 92 at Allianz Arena.

Vunipola lasted just 5 minutes before he left the field injured and replaced by former Wallaby Will Skelton.

Saracens' assistant coach Alex Sanderson revealed to the BT Sport commentators that the loose forward may have suffered a suspected broken forearm.

Billy Vunipola has suffered a suspected broken forearm according to Alex Sanderson.

Who would you start at 8 during the Six Nations?🤔 Saracens have accepted Premiership Rugby's ruling that they will be relegated at the end of the 2019/20 season.

The Premiership title holders' crashing fall from grace was confirmed on Saturday with the winners of four league titles in the last five years, Saracens will play in the Championship next term.

"The board of Saracens wishes to unreservedly apologise for the mistakes made in relation to the salary cap regulations," a club statement read.

“Our goal is to rebuild confidence and trust. The first step was to appoint a new independent chairman to lead on governance reform ensuring errors of the past are not replicated in the future.  Furthermore, following open and frank discussions with PRL, we have accepted the unprecedented measure of automatic relegation from the Premiership at the end of the 2019-2020 season..." Read more

Will Collier speaks on extending his time at Quins