Bath Rugby have announced that, New Zealand born, back rower Zach Mercer has signed a senior contract with the club promoting him to the senior squad.

Mercer, son of New Zealand Rugby League international, Gary Mercer,  made his debut for Bath in September 2016 against Newcastle and has since become a regular in the first team.

Jersey Reds have announced the signing of 26 year old winger/centre Nick Scott, for the rest of the season.

Scott started his career at Newbury before he spent two years at Bath and three seasons at London Welsh. He was most recently on a short loan at Sale Sharks from Welsh side Newport Gwent Dragons.

Harvey Biljon, head coach said: "Nick's availability came at a good time for both the club and himself, with Heath Stevens leaving us. Heath had the offer of a really good opportunity to start preparing for life beyond rugby and I appreciate his reasons for wanting to make the move - we wish him all the best." 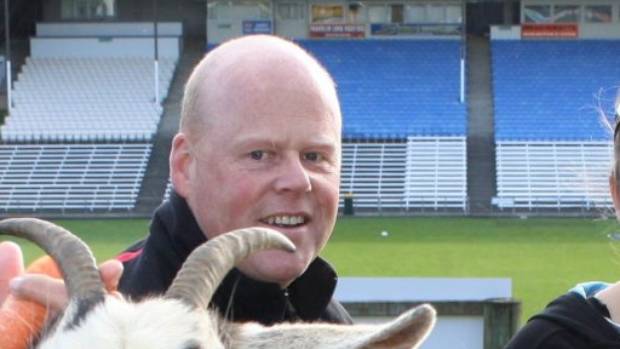 The Counties Manukau Rugby Union is on the lookout for a new chief executive after Andrew Maddock today announced his resignation, as of the end of April.

After seven years at the helm, Maddock says he will tackle some new opportunities.

"It has been a privilege to serve this union; one I'll miss terribly. I'm quietly proud of what we've achieved together in recent years. Counties rugby is well established as a high performing union, and deserves its many successes." 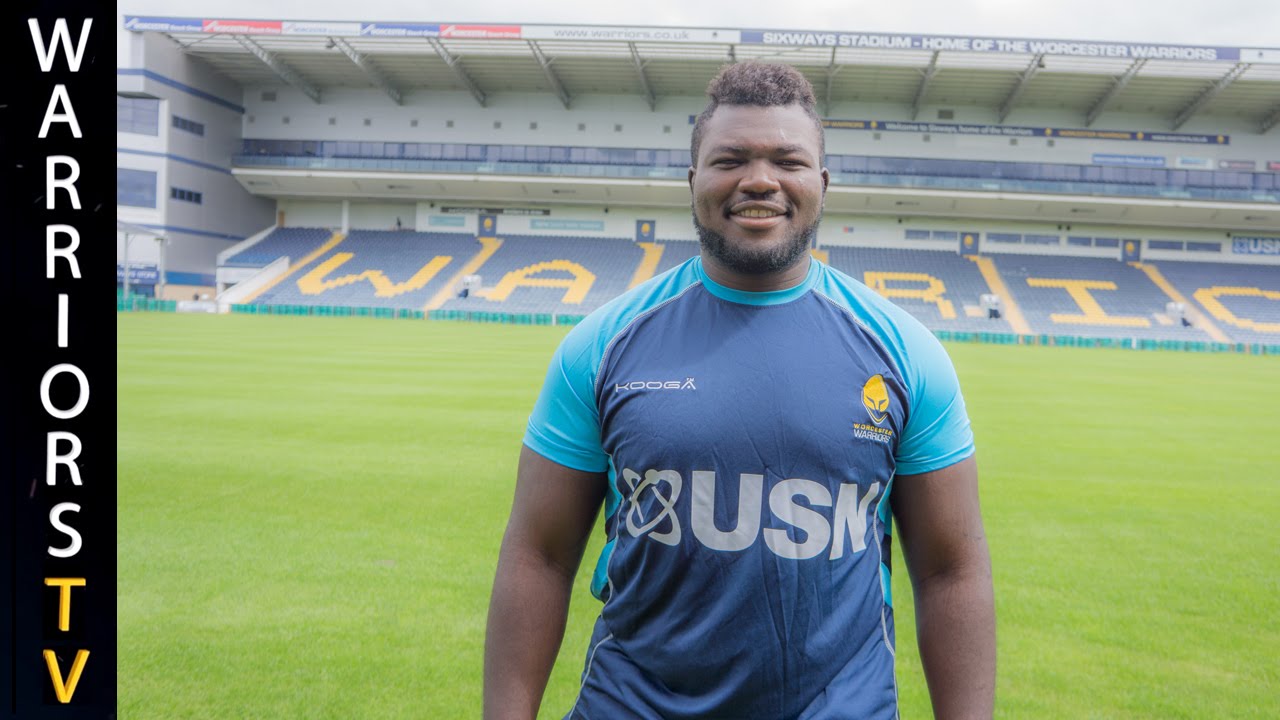 Derrick Appiah has left Worcester Warriors for Edinburgh on a short-term loan deal.

The 22-year-old, ex Italian under-20 prop has made five appearances for the Warriors, four of which occuring this season.

Tigers agreed terms with the 30-year-old Mermoz after losing both Matt Toomua and Manu Tuilagi to long-term injury this season and have now received official clearance from the French Rugby Federation for his move to Welford Road.

"We are missing two big players in our midfield and we're very happy to be able to bring in a player of Maxime's style, quality and experience there," commented Tigers head coach Aaron Mauger.

"He has played at the highest level in France, in Europe and internationally, and we look forward to bringing him into the squad here."

Mermoz has previously played at Welford Road in the European Cup with both Perpignan and Toulon, scoring a solo try for Perpignan in a 38-27 defeat by Tigers during the 2008/09 season.

Cardiff Blues have confirmed that skills coach Paul John will be leaving Cardiff to take on the role of Hong Kong Sevens coach.

“Paul has been a brilliant servant to both Cardiff Blues and the wider region over an extended period of time.

“He leaves with our full blessing and thanks for all the work he has done here. Sevens is a big passion for Paul and he has real expertise in the game.

John is replacing Gareth Baber in Hong Kong after more than four years in Cardiff. Carter and Lealiifano to lead Brumbies

Brumbies coach, Stephen Larkham, has decided to go with Sam Carter and Christian Lealiifano as co-captains heading into Super Rugby 2017.

Carter will be performing the on-field duties, while Lealiifano recovers from a bone-marrow transplant that was performed late last year, after being diagnosed with leukaemia last August.

The Brumbies continue their pre-season preparations this weekend when they travel to Mudgee to take on the Waratahs in a trial match at Glen Willow Regional Sports Stadium, before their opening match Super Rugby match against the Crusaders in Christchurch.

Lou Reed has left Sale Sharks with immediate effect and by mutual consent.

Reed said: "I would like to thank everyone involved at Sale Sharks for their help and support during my time there. I look forward to returning to Wales with my family and embarking on the next challenge in my career. I wish Sale all the very best for the remainder of the season"

Ben Marshall to retire from rugby based on medical advice

Connacht Rugby has today announced that Ben Marshall is to retire from professional rugby based on medical advice following a concussion injury.

“Unfortunately, my time as a player has come to an end earlier than I would have wished," commented Ben on the news.

"It has been a difficult time not being able to play since the injury but having had some time away from the game, I can appreciate how fortunate I’ve also been in my career."

“...I am looking forward to continuing in my financial studies and the new career path that is ahead of me, but I will always be appreciative of the lessons that Willie (Ruane) and Pat (Lam) taught me during my time at Connacht Rugby.”

The 26-year-old joined Connacht Rugby at the start of the 2015/16 season. He was unfortunate with injuries during that campaign meaning his game time was limited to five appearances.

He scored his first try at the Sportsground in the European Challenge Cup win over French side Brive in November 2015. NRL star Ben Barba has switched codes to join Toulon for the remainder of their season.

“Ben Barba will arrive in Toulon next week,” read a statement on Toulon’s website.

Ireland outhalf Johnny Sexton is out of the opening Six Nations clash against Scotland this Saturday after "feeling some tightness" in a calf injury while training yesterday.
"Johnny did light running but still feeling some tightness. He will continue to rehab but won't be selected this weekend," confirmed Ireland Rugby on their Twitter page.
Meanwhile, Munster’s Peter O’Mahony has also been declared unfit with a hamstring injury while Andrew Trimble is doubtful with a groin injury. 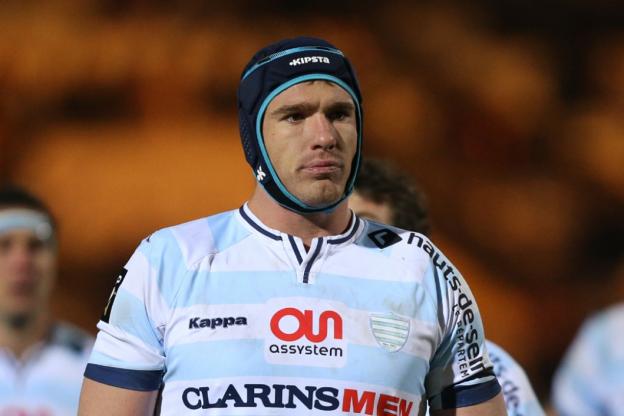 It was intially reported that no replacement would be called in for Lakafia, but head coach Guy Noves decided that cover was needed.

Le Roux rejoins the squad having not represented France since March last year, against England. 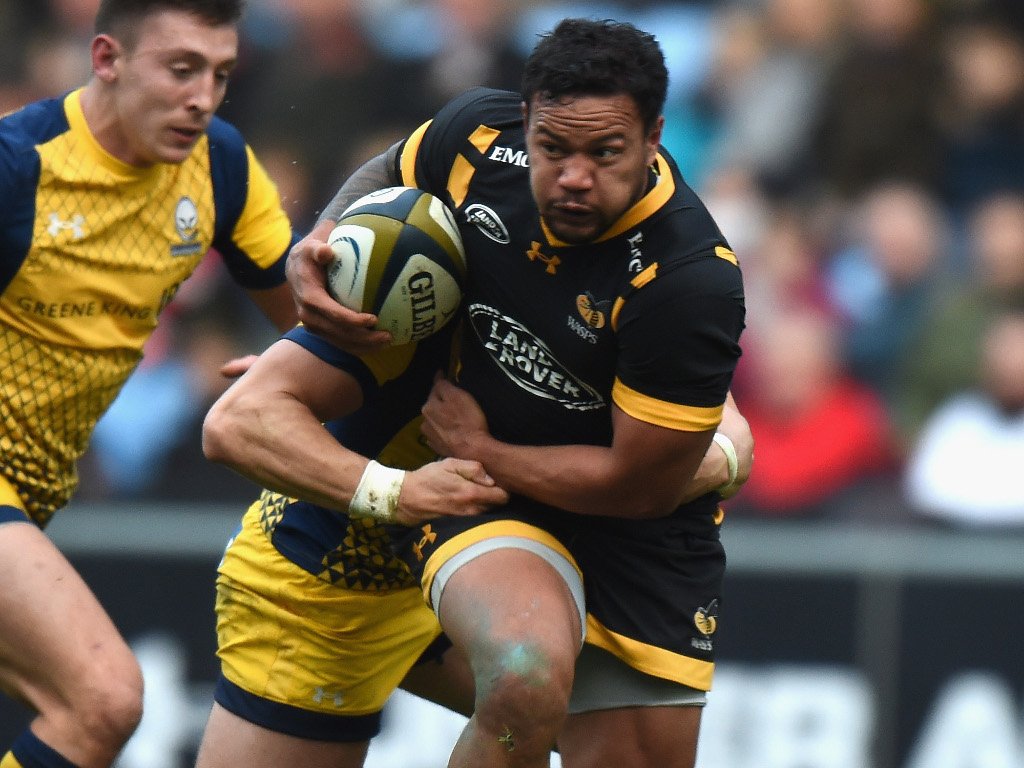 Samoan international Alapati Leiua is set to join Bristol Rugby at the end of the season.

Leiua is the Club’s first confirmed new signing ahead of the 2017/18 campaign.

“We’re delighted to beat off interest from a number of clubs and capture Alapati’s signing. He’s a robust midfielder who can play in a number of positions in the backline. He’s versatile, with excellent hands and acceleration,” Head Coach Mark Tainton commented.

“Alapati was a standout performer for the Hurricanes in Super Rugby and made a similar impact in his first season with Wasps – he will be a fantastic addition to the Bristol Rugby squad.”

The powerful centre – who arrives from Wasps – has made thirty appearances for the Premiership outfit. 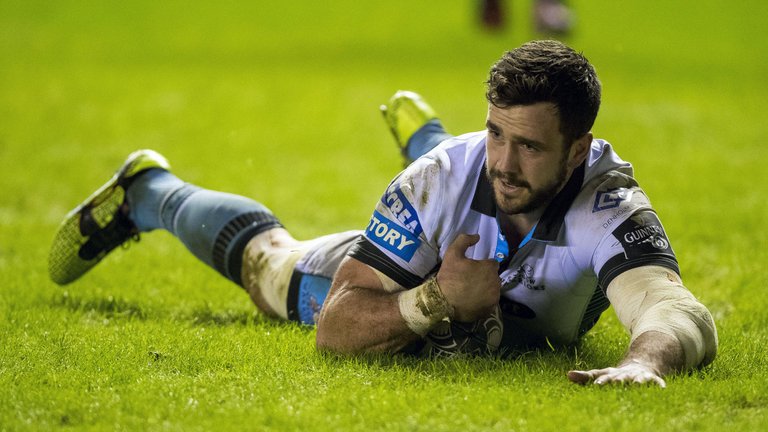 Alex Dunbar has signed a two-year deal with Glasgow Warriors that keeps him at the club until May 2019.

Dunbar made his debut for the Warriors against Ulster in December 2009, and since then has made 94 appearances for the 2014-15 PRO12 winners. 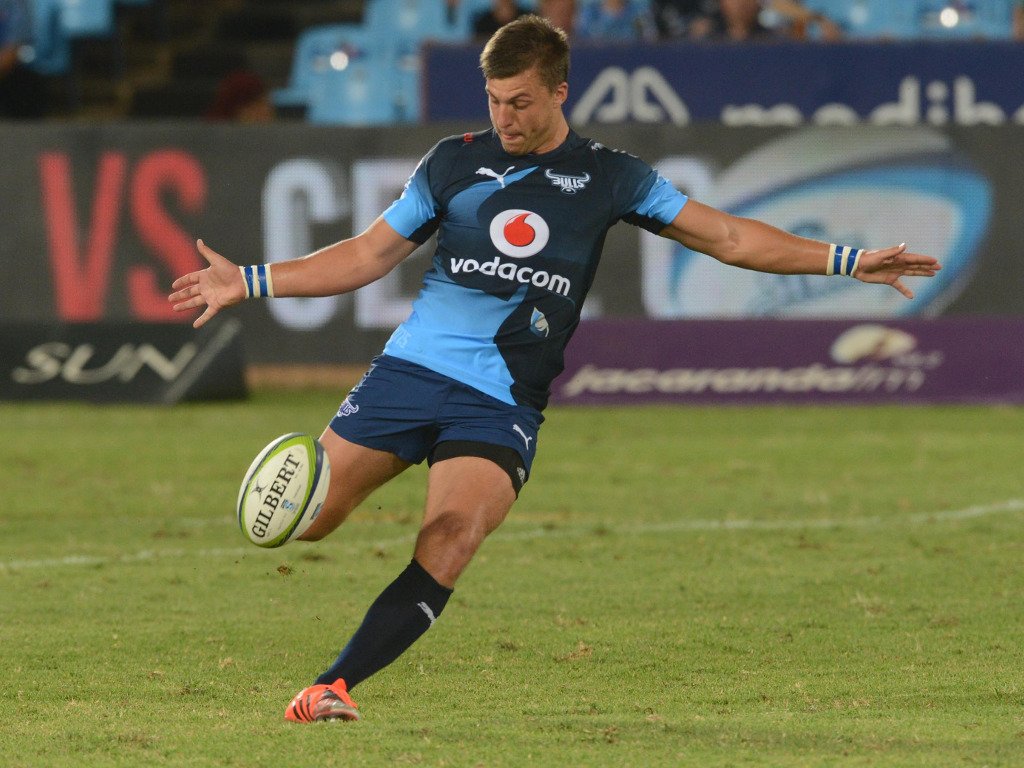 Handre Pollard will be captaining the Bulls into the Super Rugby season.

The fly half, who spent last season injured, is no stranger to a leadership role having been part of the Bulls leadership group for the last few seasons now.

Pollard will be taking over while regular captain, Adriaan Strauss, is set to miss the first few games while he recovers from surgery. 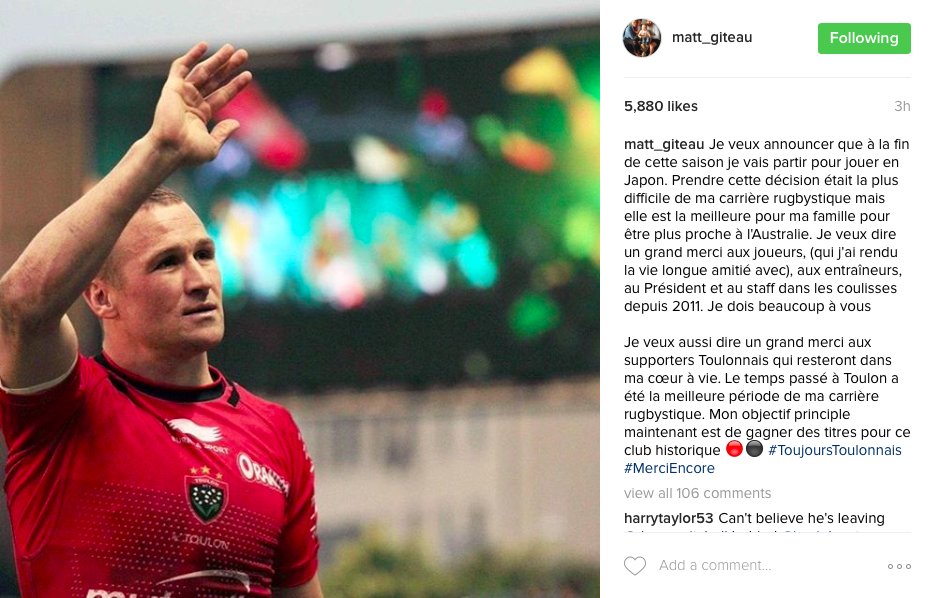 Giteau to leave Toulon for Japan

Matt Giteau announced on Instagram today that he will be leaving French club Toulon at the end of the season to play in Japan.

“I want to announce that at the end of this season I will leave to play in Japan," said the playmaker.

“Making this decision was the toughest of my rugby career but it is the best for my family to be closer to Australia."

Giteau also thanked the Toulon supporters in his farewell message:

“I also want to say a big thank you to the supporters Toulonnais who will remain in my heart for life. The time spent in Toulon was the best period of my rugby career. My main goal now is to win titles for this historic club."

The 34-year-old has played 103 Tests for Australia.

Racing 92 coach duo Laurent Labit and Laurent Travers have committed to the club until 2019, the club confirmed on their website today.

The duo of coaches said: "Nowhere else would we be able to exercise our profession in such favourable conditions. This long-term commitment will allow us to optimize our work, we who always have the ambition to win new titles, but also to reconcile this short-term goal with the preparation of the future of the club via its training center."

Arriving in 2013, Laurent Labit and Laurent Travers coached the club to be champion of France and reach the Europe.