What Connacht, Ulster and Munster have to do to reach the Champions Cup knockout stage

It might seem surprising to some but all four Irish provinces still have the opportunity to qualify for the knockout stage of the European Champions Cup. With two rounds still to be played, Leinster is the only team to have qualified for the quarter-finals, while Ulster and Munster are not far off.

Let’s take a closer look at what the permutations look like for the Irish sides:

Make-up for the quarter-finals will be as follows:

Make-up for the semi-finals:

Leinster are currently unbeaten this season and are the first team to qualify for this years knockout stage. It is unlikely that the reigning champions wont go into the next round as top seeds but any slip up will see Exter possibly pip them to that much want top spot.

Although Ulster have wrapped up 17 points and are currently sitting in the top spot in Pool 3 there place isn't exactly guaranteed with Clermont one point behind them. The two face each other on Saturday and this will most likely decide who will automatically get a quarter-final birth.

Munster have won two, drawn one and lost one of their opening four Champions Cup fixtures, leaving them with plenty of work to do in order to reach the quarter-finals. Winning the group might be out of their hands but if they want to qualify as “best second  place” side they will need to get points in the next two weeks

Connacht are the least likely to make it into the quarter-finals, despite landing two of the best results in their history during the pool stages. The Irish side is someway off the playoff places and will need to get maximum points in their next two games if they want a sniff at possibly scrapping in. 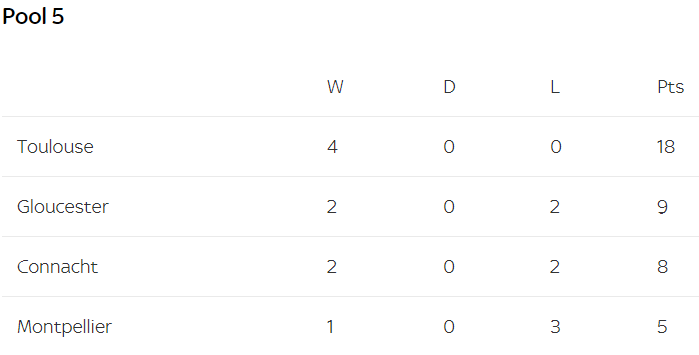