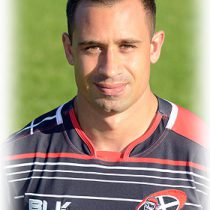 Holland has played for Harlequins, London Irish and Loughborough before spending three years in Cornwall.

The full-back/winger has been with the Pirates since 2013 and made a name for himself as an exciting and versatile back, which lead to London Scottish signing him for the 2016/17 season.

The versatile back who can play on the wing or full-back, whilst also offering a kicking option from the tee featured on 14 occasions in 2016 and was a crucial part of the match day squad.