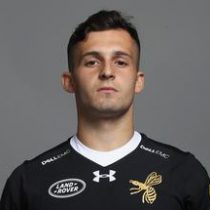 A former student at Harrow, James joined the Senior Academy at Wasps when he left the school.

James was coached by his dad John through his early years while playing for London Welsh before he moved to Wasps aged 12 and joined Harrow the following year.

As soon as his A-Levels were over in June 2015, James linked up with Wasps to train alongside the first team and he is now looking to make the best of his opportunity.

In November 2017, James was shortlisted for Anglo-Welsh Breakthrough Player Award.