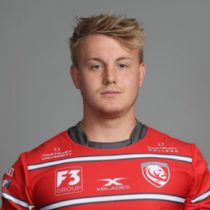 As the former captain of Gloucester U18 Academy side and with England caps at U16, U17 and U18, Joe Mullis has already achieved much in his career. He gained his first U16 cap and touring South Africa with the U18 squad. He started playing when seven for Chosen Hill Former Pupils and was educated at Churchdown Village Junior School and Chosen Hill.

A flanker-turned-hooker, he also embarked on a major adventure in the summer of 2014 to New Zealand for three months to play for John McGlasghan College in the Dunedin suburb of Maori Hill. His other representative honours were for Gloucestershire U16 and South West U16 and his aim is to become a full-time professional player. He is also interested in sports management, understanding the way a team is run behind the scenes and is now pursuing that aim at Hartpury College.

An open-side flanker when playing for England U16, the Gloucester player was named in 2017 6 Nations squad for the campaign.