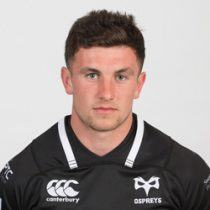 Aubrey is a former under 18 Wales international, who went on to debut for Ospreys against Harlequins in November 2016 at the age of 19.

After 23 appearances for the club, he signed new two-year deal in May 2019.

The scrumhalf is a former Pontarddulais RFC youngster and has also played 35 times for Swansea RFC in the Principality Premiership.