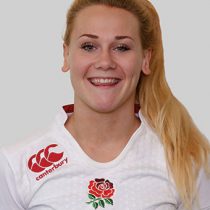 She made her 15s debut against New Zealand in the Rugby Super Series in July 2015 before playing off the bench for the Red Roses in the 39-6 win over Canada in the final match of the Wealth Series at Twickenham Stadium last November.

Jones travelled to the Olympic Games in Rio de Janeiro as a non-playing reserve for Team GB sevens at the age of just 19.

She heads into the 2017 Women's World Cup with 4 international caps to her name.