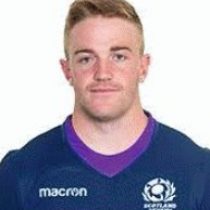 A hard-running winger who is versatile in the centres as well. After he matriculated from Trinity College Steyn went to the University of Stellenbosch where he represented Maties in the Varsity Cup.

Following a solid run of performances with Maties that helped the side to the Varsity Cup final, Steyn signed a deal with Griquas that saw him represent the Kimberley-based side in the Supersport Challenge Cup and Currie Cup.

He signed a deal to join Glasgow Warriors ahead of the 2019/20 season but was granted an early release from the Griquas and joined the club during the 2018/19 season.

He was called up to the Scotland Six Nations squad having represented the 7s side in the World Sevens Series.

The South African-born back qualified for Scotland through his Scottish born mother.

In May 2019, he was named in Scotland's training squad ahead of the 2019 Rugby World Cup but made his debut as a replacement in the national team's defeat of France at BT Murrayfield in the 2020 Six Nations.