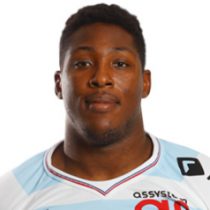 The French prop is a member of the Racing 92 Academy.

Thanks to an impressive physique, he was spotted by the Nanterre rugby club at age 12. After 3 years in his hometown, he joined Racing 92 and made his Top 14 debut during the 2017/18 season before being loaned to USON Nevers in the PRO D2 as injury cover.

The 2017 season also saw him get a call-up to the France U20s side that competed at the Six Nations.