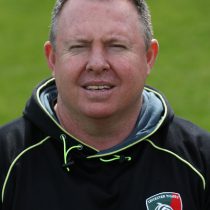 Playing his club rugby in Canberra, O'Connor captained the ACT provincial team (1993-95) and represented Australia at every level, winning a senior cap in 1994.

He changed codes in 1996, playing rugby league in Australia and then accepting a contract in France, but returned to union with Kubota Corporation in Japan as player and then coach. As head coach there, he took them into the top four of the league for the first time.

Returning to Canberra in 2004, he spent four seasons as Brumbies assistant coach and three years with the Australia 'A' squad.

O'Connor first arrived at Leicester Tigers as backs coach under Heyneke Meyer in the summer of 2008 after previously working with the Brumbies and as assistant coach of Australia 'A'.

During his spell as backs coach, and head coach from the summer of 2010, Tigers were top try-scorers in Premiership rugby four times in five years.

O'Connor was in charge of Leicester for the final three games of the 2016-17 season as the club beat Newcastle and Worcester to seal fourth place, before losing out in the play-off semi-finals by one point at Wasps.

But in the 2017 season, the Tigers lost nine times, with defeat at home to Newcastle in the penultimate game of the season ending any hope of a top-four finish.

In September 2018, O'Connor was sacked as Leicester's head coach after the Tigers lost 40-6 at Exeter in their opening Premiership game of the 2018/19 season.