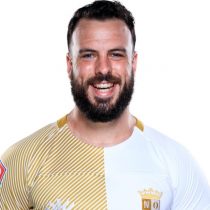 O'Toole is a hooker who is a former Gaelic footballer and was capped at Ireland U19 level.

After completing two years in the Academy, playing with both the Connacht Eagles and Corinthians RFC, O'Toole signed a senior contract with the Galway based side.

He joined Glasgow's pre-season training group ahead of the 2091/2020 season.