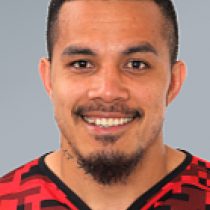 A bulldozing winger Hosea Saumaki represented the Tonga 7s before moving to Japan, where he attended University and made strides towards becoming one of the dangerous attacking weapons in Japan's Top League.

Nicknamed the ‘The Tongan Godzilla’ Saumaki is in a similar mould to other iconic wingers like Lomu, Nadolo and Savea.

In 2012, Saumaki represented Tonga at Under-20s level and on the international Sevens circuit. The Tongan-born back represented Daito Bunka University in Tokyo before joining Japanese Top League club Canon Eagles in 2017.

A prolific try-scorer, Saumaki finished his debut season in the Top League second on the competition’s try-scorers tally. Saumaki expressed that he wanted to represent Japan at test level but may need to use the Olympic loophole in order to do so, this never materlised.

In January 2018 he was called into the Sunwolves 2018 Super Rugby squad and will look to make an impact in his debut season.

He made his Test debut for Tonga against the All Blacks earlier this year, before adding two more international appearances in back-to-back appearances against Samoa in New Zealand.

He will join Tigers ahead of the 2021/22 season after five seasons in Japan, including three seasons representing the Sunwolves in Super Rugby.