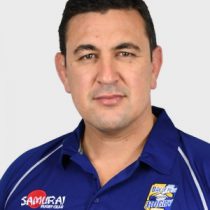 A Bay of Plenty centurion, playing 113 games in the Bay of Plenty jersey transitioned into coaching 15 years ago, while finishing up his playing day in Fukuoka, Japan. After returning to New Zealand he has held several age group and club roles in both Bay of Plenty and Wellington before taking the reins for Bay of Plenty in 2015 season.

McMillan, a Bay of Plenty Centurion, took the reins as coach of the Bay of Plenty Steamers in 2015 is also the Director of High Performance.

He was then appointed as the New Zealand Provincial Barbarians Head Coach for the 2017 British and Irish Lions Series.

In September 2017 he was announced as the new Maori All Blacks coach.

McMillan became instrumental in the success of Bay of Plenty Rugby Union’s High Performance programme during his tenure with an impressive record including 2019's Mitre 10 Cup Championship title.

In February 2020, he signed a one-year deal as interim head coach of the Chiefs ahead of the 2021 Super Rugby season.