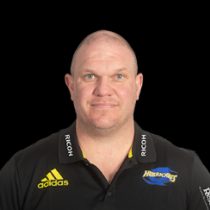 Cron has been adding his scrummaging expertise to the Hurricanes since 2011 when he was then head-coach Mark Hammett’s scrum coach.

Cron began scrum coaching in 2007 with Northland’s representative team, but learned his craft under the tutelage of his father Mike Cron, the current All Blacks forwards coach and a world renowned scrum coach.

Dan has also worked extensively in Japan as well as with the Samoan national team.

Since joining the Hurricanes, Cron has been instrumental in building the depth and developing the talent of the region’s front rowers.

He has worked closely with the provincial squads within the region and been heavily involved in the Hurricanes age grade programme.