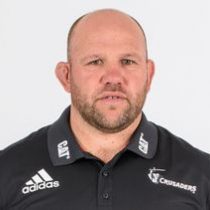 A scrum expert in his own right Jason Ryan has made a name for himself in Canterbury as one of New Zealand's premium forward coaches.

Ryan is known for setting up the Front Row Club in 2013, a coaching programme focused on the safe development of props and hookers in New Zealand.

He also has national experience as the Scrum Coach for the Black Ferns in 2014, and New Zealand Under 20 team for the last three seasons.

Ryan has been working with the forwards in the Canterbury provincial team for the last five years, initially as a Scrum Coach and then as an Assistant Coach in 2015 and 2016.

In 2017 Ryan joined Scott Robertson at the Crusaders as the side's Assistant Forwards Coach and helped the side to win the Super Rugby title maintaining over 90% at all set pieces.

Ryan was back for his second season as Assistant Forwards Coach for the Crusaders in Super Rugby for 2018 before signing a new deal with the club in April 2019, seeing him with the squad through to the 2020/21 seasons.