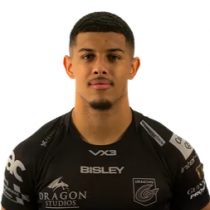 Speedster Rio Dyer made his debut for the Dragons in January 2018 against Saracens in the Anglo-Welsh Cup and his PRO14 debut less than a month later against Benetton Rugby.

A product of the Dragons Academy, Dyer has represented Wales Under-20s, most recently at the World Rugby Junior Championships in France in the summer of 2019.

Tipped for a bright future for the man from Gwent, Dyer has made 8 appearances for the club, scoring 5 points.