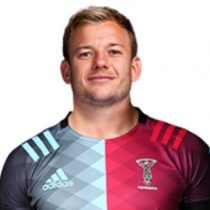 Steele played rugby and football at a young age in Scotland and represented Kilmarnock in pro-youth football.

He also represented Scotland at a young age playing for the under-17, 18 and 20 age groups before joining the Leicester Tigers Academy.

Steele impressed as young prospect at Leicester Tigers before getting snatched up by London Irish in 2014.

In March 2016, he announced that he had signed a two-year contract extensions with London Irish, a deal that saw him remain at the club until the end of the 2017/18 season.

The former Scotland U20 international signed a new deal in May 2018, committing his future to Irish for another season ahead of the 2018/19 season.

After 115 points to his name throughout a 127-cap career at the Exiles, Steele signed a deal with Harlequins in July 2020.