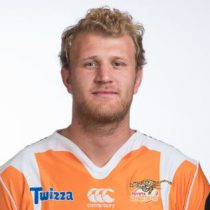 South African Schools Academy in 2008, Bernardo represented Eastern Province at U18, U19 and U21 level before making his Currie Cup debut for the EP Kings in 2012. Making his Super Rugby debut against the Crusaders in 2013, Rynier linked up with the Cheetahs pre-season squad for 2014 Super Rugby, as the Southern Kings had been demoted from the competition.

Bernardo eventual signed a deal with Ospreys in 2014 and did not join the Cheetahs for Super Rugby.

In 2016 he left Ospreys and joined Scarlets.

At the end of the 2016/17 season Bernardo was released by Scarlets and the second rower took up the opportunity to return home and join the Cheetahs for the 2017 Currie Cup.